Thank you for your feedback on Access to Argyll and Bute (A83) corridor route options.

Public consultation on the 11 corridor route options took place between 23 September and 30 October 2020. This initial consultation is now closed and we would sincerely like to thank all those who participated in the consultation and shared their views. During the five week consultation we received in excess of 650 responses. These responses highlight a range of issues and provide valuable information for the project team to consider as design and assessment work progresses.

We plan to publish a report on the consultation findings once everything has been considered, however, in the meantime, the following provides a brief summary of the emerging issues and themes that respondents have fed back to us.

Feedback from respondents noted the following issues and themes:

Whilst not explicitly asked in the consultation, many respondents took the opportunity to state their preference on which corridor or corridors should be taken forward for further consideration. We are currently reviewing these comments on corridor preference and the findings will be included in the subsequent report.

The consultation also sought feedback on the virtual sharing of information on this project, and encouraged consultees to suggest any alternatives:

Brief summary of the responses on virtual sharing

Respondents' feedback on alternative methods for future engagement on the scheme and suggestions for methods to be used included:

The feedback we have received will help inform our assessments of the corridor options as we work towards recommending the preferred corridor for the project by Spring 2021.

Public engagement is extremely important to us - it's a vital part of our work as we develop our plans. We'll be keeping you informed of progress as part of our commitment to ongoing and considered engagement. Project updates, news and details will be posted in a new dedicated Story Map section on our website which will be launched soon, and there will be further opportunities to share your feedback as the design work is further progressed.

We look forward to your continuing interest and engagement in this project. 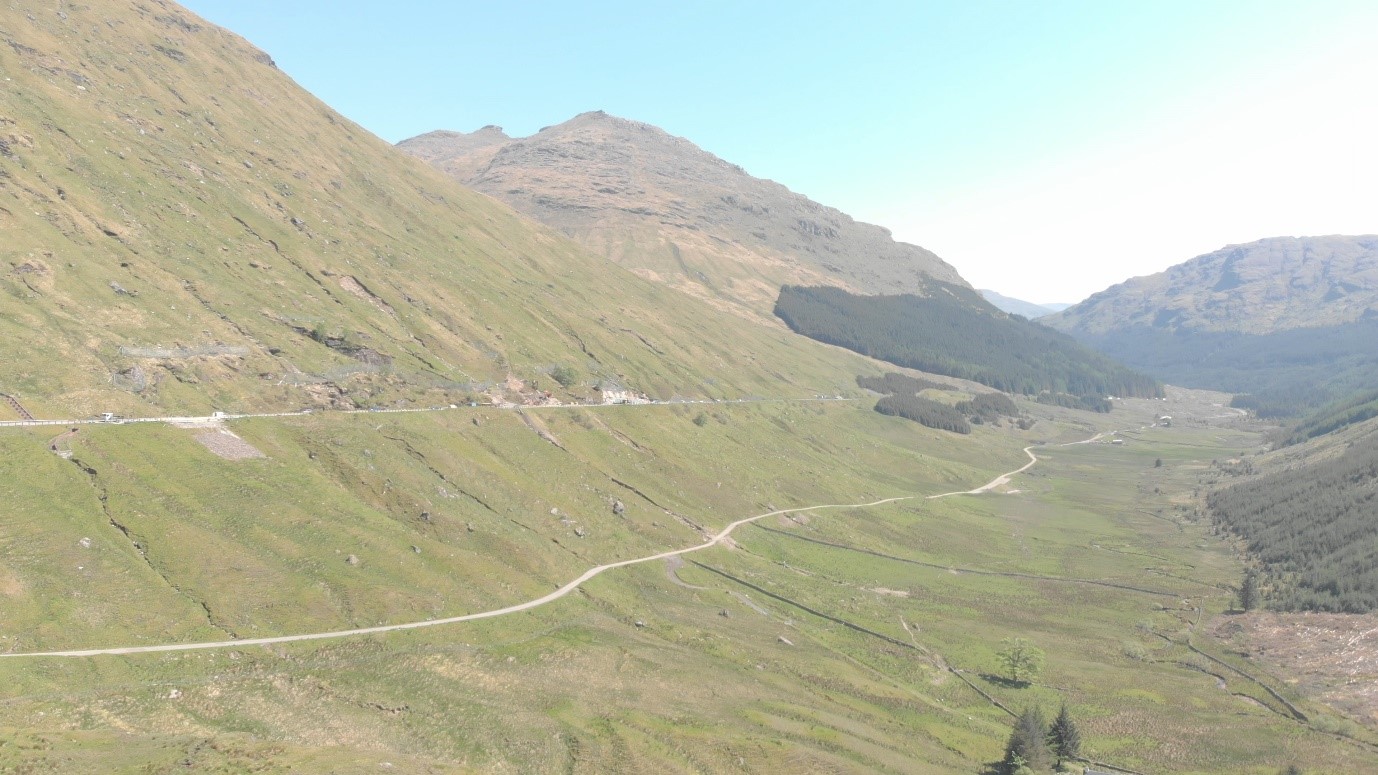 The Rest and Be Thankful is the highest point on the A83, separating Glen Kinglas from Glen Croe. It is also one of the places in Scotland with the highest risk of landslides and debris flow hazards. These have increased in recent years due to the frequency of heavy, intense and prolonged periods of rainfall.

Following a number of landslides in 2004, Transport Scotland carried out the Scottish Road Network Landslides Study. As part of this study a hazard assessment and ranking exercise was carried out for debris flow. From this assessment the A83 Ardgartan to Rest and Be Thankful is one of the most highly ranked debris flow hazard sites in Scotland.

As part of the £82 million invested in the maintenance of the A83 since 2007, over £13.6 million has been invested in landslide mitigation works at the Rest and Be Thankful. This was to help keep Argyll open for business by reducing the impact of landslides on the A83.

We are aware of the A83's importance as the primary route to Argyll. In 2012, the A83 Route Study was carried out to identify and assess potential options to minimise the effects of road closures.

Our objectives then were to:

The resulting landslide measures have seen the opening of the alternative military road, installation of nets, catchpits and improvements to drainage at this location. These interventions have already proven to be successful, helping to keep the A83 open for an estimated 48 days when it would otherwise have been closed.

We continue to explore ways to reduce the risk of impacts caused from landslides in the area.

Construction of the next roadside catchpit at the Rest and Be Thankful, a project valued at £1.2 million, is currently scheduled to be built between this September and March 2021. Once complete, the Phase 1 catchpit will provide an additional 4,600 tonnes of volume to collect debris flow from landslides, to add to the 15,000 tonnes provided in the existing four catchpits.

We have also progressed the programme to proactively plant trees on the hillside to help reduce the risk of landslides in the area. Land purchase at the Rest and Be Thankful has completed and we are working closely with Forestry & Land Scotland to reintroduce the required local provenance native vegetation on the hillside.

The mitigation works to the existing route form a substantial investment to help reduce the risk of road closures. However, most recently, it appears that severe weather (rainfall) and the associated landslip events are becoming more frequent. It is unknown if this will continue or even worsen in future. Therefore, further action is being taken to provide safe, resilient and sustainable access to Argyll and Bute.

Transport Scotland is now taking forward the project development work needed to deliver an alternative route to the existing A83, in parallel with the second Strategic Transport Projects Review which is underway.

Inevitably, new roads come with associated impacts for those living and working alongside them. It is important that we follow the correct statutory process to ensure a fair and transparent assessment of options and impacts on local residents and communities.

In particular, part of the area’s intrinsic value is the outstanding landscape we will be working in. Developing a resilient and sustainable route that works in harmony with its surroundings and continues to support the associated tourism economy which is so important to the area is essential.

Transport Scotland is committed to placing public engagement and meaningful dialogue with directly affected communities and other stakeholders at the heart of the development and delivery of our plans for improving the route.

We want to ensure that communities have the opportunity to comment on the proposals for the proposed project at every stage in the process.

We recognise that the timescales for an alternative to the current route are frustrating for the local community. However, given our considerable experience in developing other rural routes such as the A9 and the A96, it would be misleading to pretend otherwise. In recognition of the pressures that the current situation brings to local communities and businesses, we are committed to progressing substantial shorter term investment in the existing A83 as part of a two-phased approach.

This work underlines the Scottish Government’s commitment to continued work with key stakeholders to ensure that Argyll & Bute remains open for business.

This web page explains the process that we will follow and how stakeholders and the public will have the opportunity to be involved. The initial eleven route corridors which are under consideration are available to view.

Transport Scotland will work with key agencies, local authorities and local communities to address the challenges, which include:

As work on the programme progresses, Transport Scotland will ensure that arrangements for participation by stakeholders and members of the public are inclusive, open and transparent. We will encourage a wide range of participants to get involved and provide their comments and feedback.

All proposals are developed following the Design Manual for Roads and Bridges (DMRB) as used on all major infrastructure projects.

Planning permissions will be obtained through the Roads (Scotland) Act 1984.

Transport Scotland takes public engagement seriously - it's a vital part of our work as we develop our plans. We will consult with a wide range of parties including agencies, local communities, road users and the general public. Our recently published story map virtual exhibition sets out how we have, and may engage, in a virtual sense through the early stages of this project, subject to COVID-19 restrictions.

Please use the table below to find out how we will consult the public during the course of the project.

Key stages during the design and development process 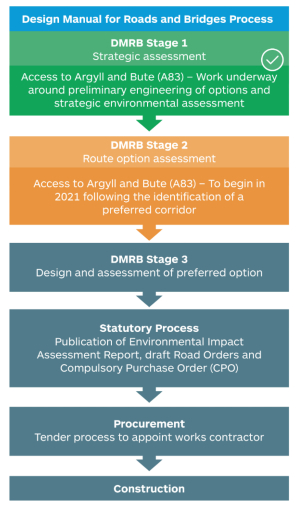 We are asking for comments on the 11 options by Friday 30 October.

The feedback received will inform the progression of Stage 1 data collection, assessment of corridors and sifting work and we will provide an update on that work as it progresses.

We will then look to make recommendations for a preferred route corridor with alignment options in Spring 2021.