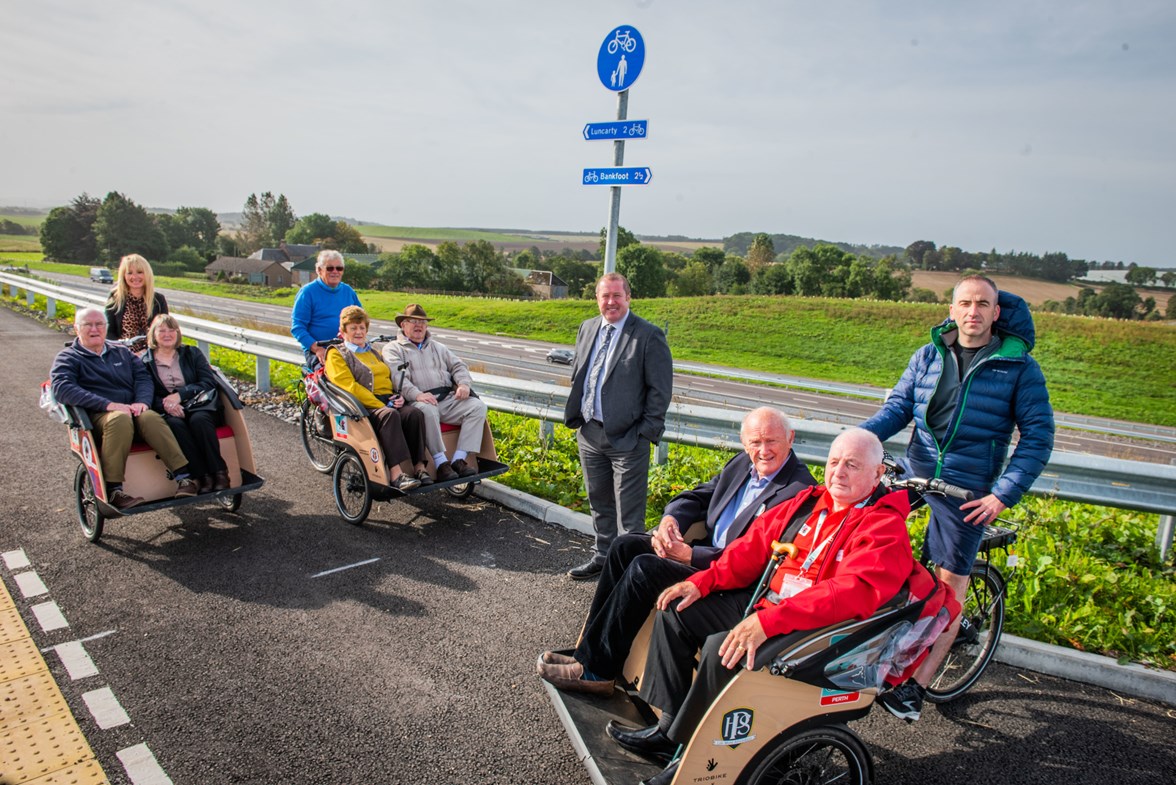 Transport Minister Graeme Dey has visited the A9 Dualling: Luncarty to Pass of Birnam project to recognise the range of benefits delivered to the communities of Perthshire throughout the project’s construction period.

Mr Dey was joined by members of local community organisation, Stanley Development Trust and charity, Cycling Without Age Scotland, as members of the Trust explored some of the 4 km of cycle paths, constructed as part of the £96 million infrastructure project to upgrade this section of the A9 to dual carriageway

“Transport infrastructure is key to improving connectivity in rural areas like Highland Perthshire and all across Scotland. It is also key to boosting economic prosperity and growth nationally and locally. The new and upgraded non-motorised user (NMU) route, some of which we’ve made use of during my visit, supports active travel choices and encourage people to opt to walk, wheel and cycle for everyday journeys.

“It is clear this project has delivered so much more than the physical infrastructure. With the support of third sector organisations and local community partners, this project has helped improve the economic, social and environmental well-being of the surrounding communities, by providing training and employment opportunities, fair working practices, promotion of equality, supporting small to medium enterprises and charities – the list goes on.

“The community benefits delivered as part of this project will leave a legacy beyond the construction phase and have changed lives for the better, and I would like to congratulate all involved for the collaborative approach taken to enable these benefits to be realised.”

Since contract award, the A9 Dualling: Luncarty to Pass of Birnam project has delivered the following community benefits:

Gemma Patterson, Project Sponsor for Transport Scotland, said: “The successful delivery of this major infrastructure project, has recently reached its biggest milestone as the road opened to traffic in August. This provides an opportunity to reflect on, and to celebrate the breadth of opportunities that have benefited the people and communities of Perthshire.

“Community benefits were an integral part of the contract awarded to Balfour Beatty to upgrade the A9 to dual carriageway between Luncarty and the Pass of Birnam, and I am delighted to report that the project has successfully delivered on the challenging targets set at the outset.

“With the help of our community partners, the project has maximised employment and work placements, delivered skills and training to support young people at school, colleges and universities, and has inspired and encouraged careers using science, technology, engineering and mathematics (STEM) within the next generation of engineers – that is our legacy.”

Following the trishaw ride with the members of Stanley Development Trust, Mr Dey met with representatives from the project partners who have been instrumental in delivering the project’s ambitious community benefits targets, including Academy9, Barnardos, Developing the Young Workforce and HM Prison Perth.

Speaking at the event, Mr Dey praised the collaborative approach and thanked the partner organisations for their support, adding: “I look forward to building on these achievements as we continue the delivery of our significant investment in the A9 Dualling Programme.”

The construction works to dual the existing 9.5 km of single carriageway north of Perth to Pass of Birnam began in earnest in February 2019, following the appointment of Balfour Beatty as the main contractor in September 2018.

The project involved the construction of four new bridges over the A9 and the removal of all direct accesses to the A9 carriageway. These measures have improved the safety of the route and will reduce driver frustration and stress by providing more opportunity to overtake safely.

The project has also created approximately 4 km of new and upgraded pedestrian, equestrian and cycle routes, helping to promote sustainable and active transport, linking the communities of Luncarty and Bankfoot for the first time. In addition, sections of the existing core paths within the project area have also been upgraded with new asphalt surfacing and mounting blocks have been installed at key locations to improve access for equestrians.

Over the next few months, Balfour Beatty will continue to undertake finishing and landscaping works, which may, on occasion, require some traffic management to allow works to be undertaken safely. The project is expected to be fully complete in Winter 2021.