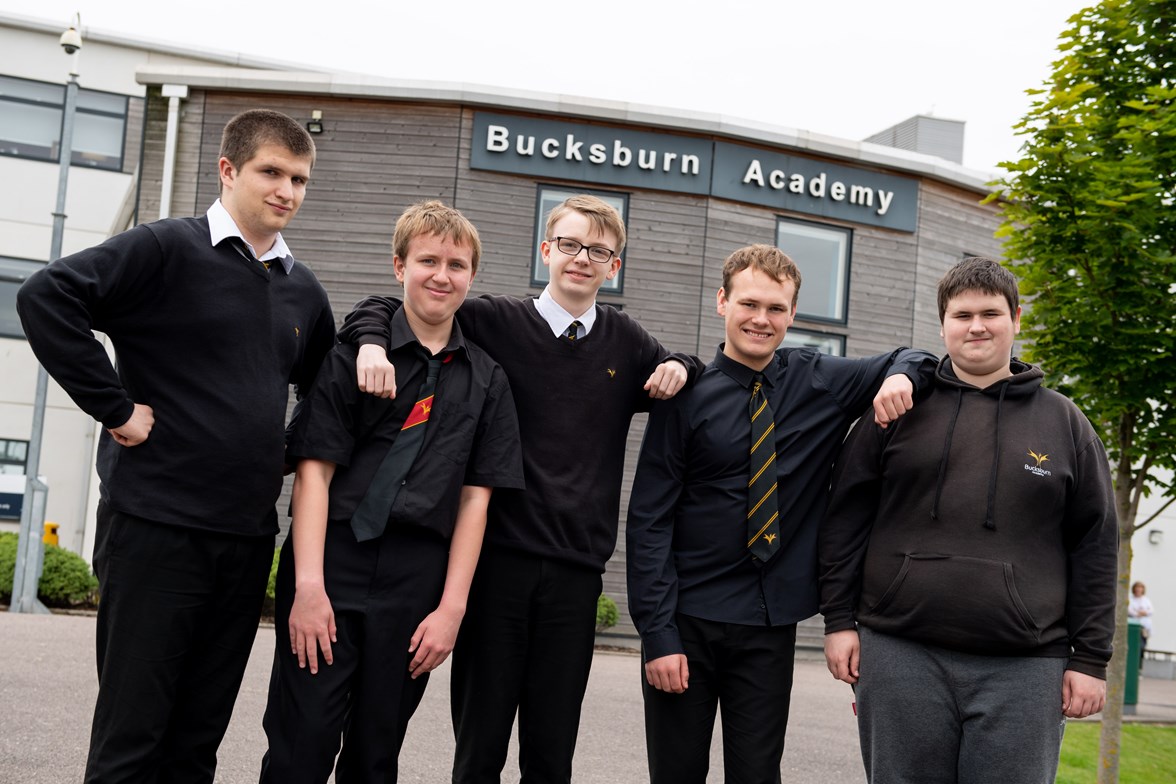 A short film created by pupils from Bucksburn Academy will premiere at the GoNorthEast Road Festival this weekend.
The Bucksburn team won with 955 votes (72.7 per cent) of the total 1,314 votes cast. They were shortlisted in the competition to celebrate the opening of the Aberdeen Western Peripheral Route/Balmedie to Tipperty (AWPR/B-T) project, going head-to-head with team 1 from Inverurie Academy.
Visitors to the family-friendly GoNorthEast Road Festival this weekend (Saturday and Sunday, September 8-9) will see the film on a big screen as they enter the festival village, situated on the new road.
The two-day festival will offer visitors a range of free exhibitions and entertainment, including street theatre, a display on transport through the ages and the chance to cycle and walk along a picturesque part of the new road in the Dee Valley, including crossing a new bridge over the River Dee.
The competition was part of the GoNorthEast campaign, which was launched to underline the benefits of this transformational project and show how these will positively impact on people’s lives and the future of businesses, small and large across the North-east.
The campaign is supported by three key themes, #GoConnect, #GoSafer and #GoGreener, and the film teams were asked to focus on one of these themes when producing their documentaries.
Bucksburn Academy’s film focuses on the campaign’s #GoConnect theme and includes dashcam footage as well as an interview with a commuter who will benefit from using the AWPR/B-T route and shorter journey times.
Around 40 pupils from six schools took part in a film-making workshop at Aberdeen Exhibition and Conference Centre in June, where they received hints and tips from some of the most experienced documentary makers in the north-east of Scotland.
Inverurie Academy, Turriff Academy, Cults Academy, Bucksburn Academy, St Machar Academy and St Margaret’s School for Girls all took part.
The judges included STV North News Editor, Donald John Macdonald, and Managing Director of Tern TV, David Strachan, who both gave presentations on how to develop a compelling storyline and get the best out of filming.
The judges praised Bucksburn Academy’s film for its strong narrative and story-telling, saying:
“This film effectively focused on the potential benefits the AWPR will generate for commuters. The car sequences were nicely shot and we saw a lot of the actual road. Some strong points were made about how the AWPR will cut down on journey times, and this was the only film to explore the potential benefits beyond the north-east of Scotland.”
Bucksburn Academy head teacher Michael Paul said: “We are delighted at the news that our team was successful in winning this competition. “The pupils and staff worked incredibly well together to achieve such a fantastic film that highlighted the construction of the AWPR and its potential benefits for road users.
“It is fantastic their achievements have been recognised and hope that this inspires them to continue to work hard to achieve even more.  We would also like to commend Inverurie Academy as finalists for their informative and very professional production.”
Cllr Gillian Owen, chair of Aberdeenshire Council’s Education and Children’s Services Committee, said: “This has been an excellent opportunity for pupils to be creative and to use their research skills to tell their story about the AWPR/B-T project.

“I’d like to congratulate Bucksburn Academy for their success, and Inverurie Academy for making it through to the final, as well as all the other schools who submitted entries. I hope everybody has enjoyed being involved.”
A spokesperson for the GoNorthEast Road Festival said: “Congratulations to Bucksburn Academy and well done to all the pupils who took part in the filming competition. We are all looking forward to seeing their video on the big screen at the GoNorthEast Road Festival this weekend.
“The opening of the much anticipated AWPR/B-T is an exciting time for the north-east of Scotland and this is a fantastic opportunity for the pupils to showcase what the project will mean to them and the wider region.”
Highlights of the GoNorthEast Road Festival include:
• Transport through the ages – 120 vintage and modern vehicles on display curated by locally based event partners Grampian Transport Museum including a penny-farthing, The Shore Porters Society’s 17th Century wagon, a 120 year old Gavioli & Cie steam organ, Guy Martin’s record-breaking (112mph) Rourke speed bike and a Tesla Model S.
• Interactive displays on new technology and engineering from Shell’s Eco Marathon teams and the Greenpower Formula 24 initiative.
• A car simulator, a toy car arena and loads more activities for children including face painting and murals created by toy cars.
• International and UK street performers.
• ‘Borrow a Bike’ will see a stock of up to 200 bicycles, helmets and safety equipment offered to people of all ages and abilities to travel their choice of distance along a closed 4km loop on the road.
• A Country Walk allowing people to explore a further 1.8km beyond the event arena to enjoy the picturesque Dee Valley.
• The GNE Cycle Experience offering a further opportunity for up to 1,500 cyclists to register to cycle an 18km closed-road loop of the new AWPR on Sunday morning (September 9)
The festival is not ticketed but access is by shuttle bus from Kingswells and Craibstone Park and Ride and Union Terrace. Visitors are being encouraged to pre-book their preferred travel times to ensure demand is spread across the full weekend.
See more information and book your bus
Published 5 Sep 2018 Tags