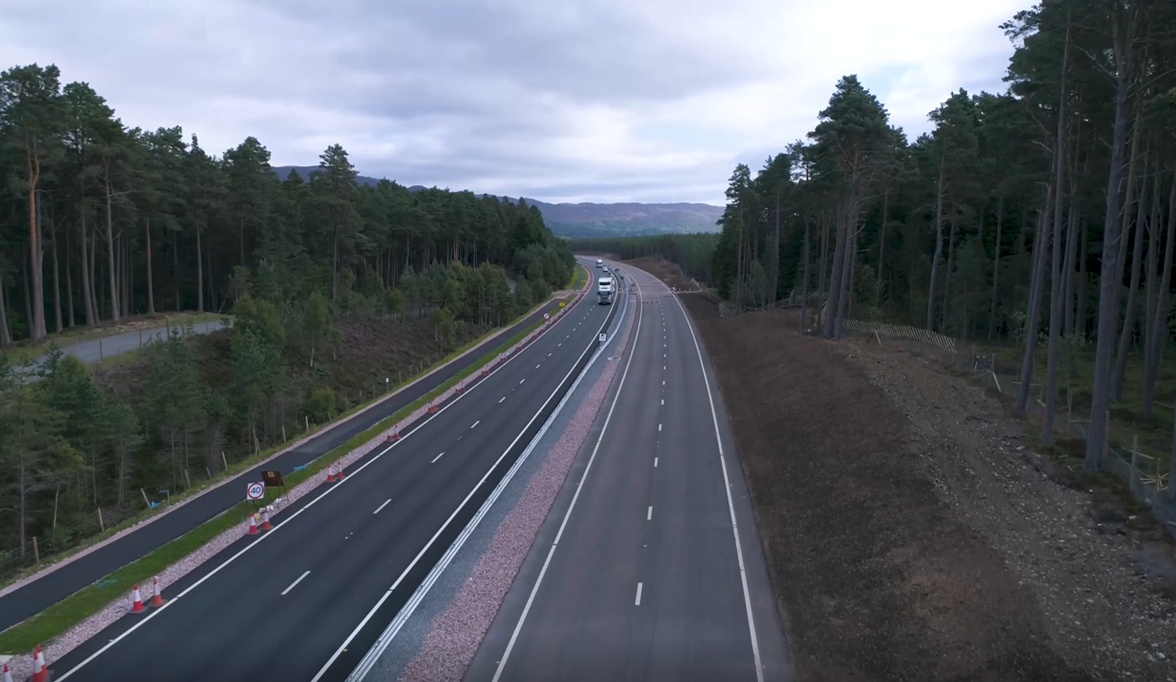 The Cabinet Secretary for Economy, Jobs and Fair Work was speaking during a visit to inspect finishing work on the two year construction programme for the new £35m road between Kincraig and Dalraddy on Wednesday (23 August).

As fresh aerial footage of the new road was published, Mr Brown highlighted that the new 7.5km section of dual-carriageway will deliver a range of benefits to the public and the Scottish economy.

Mr Brown said: “When this section is open to traffic, drivers will enjoy safer opportunities to overtake, a reduction in frustration, reduced congestion, improved journey times and a better experience travelling between the central belt and Inverness.

“Building this section first should be particularly warmly welcomed by drivers as it introduces dual-carriageway to what has been one of the longest stretches of single carriageway on the A9.

“It will also make an important contribution towards our goal of inclusive sustainable economic development by opening up our country for trade and tourism.

“This is a significant milestone towards achieving the Scottish Government’s ambitions to introduce more than 80 miles of new dual-carriageway on the  A9 all the way from Perth to Inverness by 2025.”

As work on Kincraig to Dalraddy draws to a close, a shortlist of companies bidding to construct the next section, 9.5km between Luncarty and Pass of Birnam, has been announced as: Farrans Construction and Roadbridge JV; Wills Bros. Civil Engineering and Lagan Construction Group JV; Dragados, S.A. and Balfour Beatty Civil Engineering.

Mr Brown added: “Work on the A9 Dualling Programme is continuing at pace, with preferred routes having been identified for more than 90 per cent of the programme, and we expect to award the contract for the Luncarty to Pass of Birnam section in the first half of 2018.

“The A9 dualling programme is already delivering for our economy by supporting nearly 1,200 engineering-related jobs with many more in the pipeline.”

The construction related traffic restrictions on the Kincraig to Dalraddy section will be removed once a range of finishing works, which are currently under way, have been finalised and the necessary safety audits are completed.

The £35m contract to design and construct the Kincraig to Dalraddy section is being delivered by Wills Bros Civil Engineering and John Paul Construction as part of a joint venture.