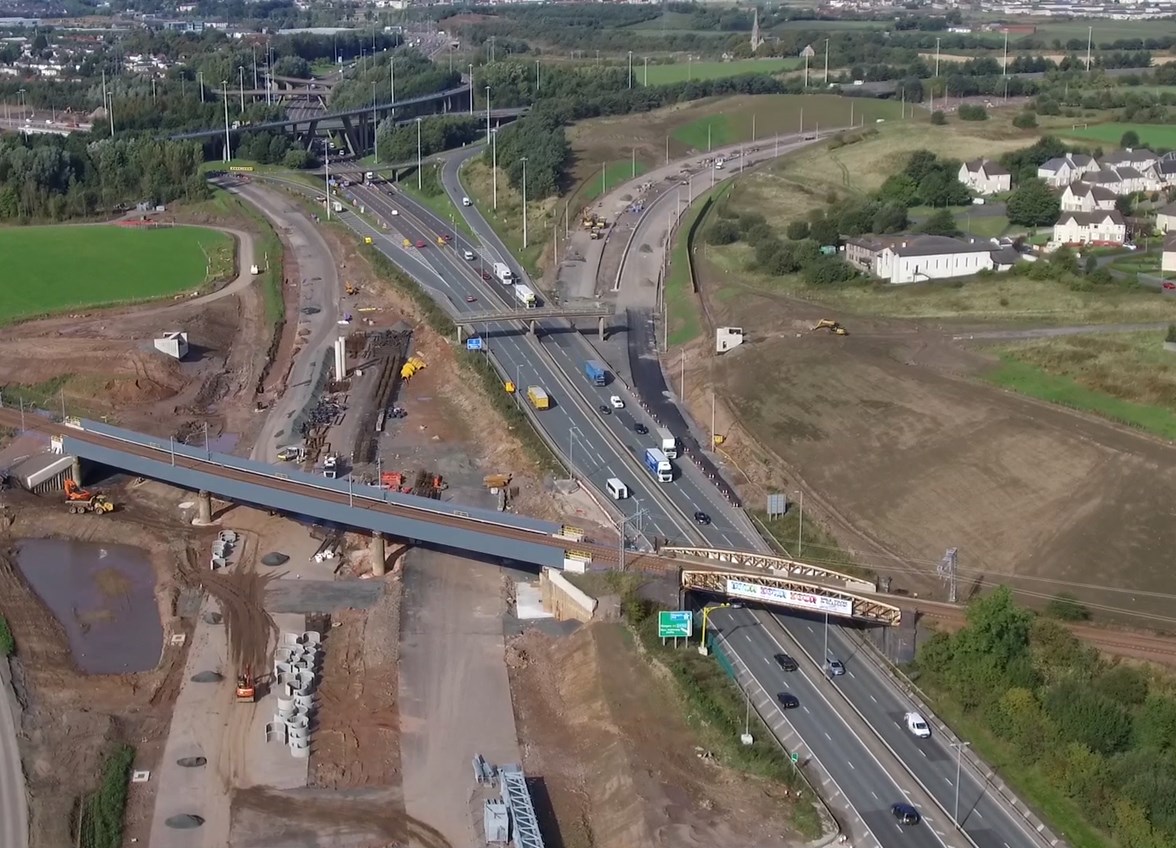 Following nearly three years of work, the new M8 motorway being built as part of the M8 M73 M74 Motorway Improvements Project is due to open to traffic in approximately 10 weeks’ time.

The new M8 motorway includes 5km of new carriageway, east and westbound, which has already been built to the south of the existing A8, between Baillieston Interchange and Eurocentral.

When the new M8 is opened to traffic, the existing and improved A8 will continue to be used by local traffic, separating these local journeys from the strategic Glasgow and Edinburgh traffic.

As a result of these improvement, current traffic volumes are expected to reduce by up to 25 per cent on the motorway and will improve journey times during peak periods by shaving almost 20 minutes through the M8 corridor.

During these necessary works to connect the new motorway, both east and westbound traffic on the M8/A8 will be diverted via the newly aligned A8 near Bargeddie from 8pm on Friday 17th February 2017, for a period of approximately ten weeks.

The diversion is necessary to connect the newly built M8 to the existing motorway at Baillieston Interchange.

Whilst access to all routes will be maintained, Transport Scotland is warning motorists to expect significant delays on the M8/A8 corridor, the M73 and surrounding local roads as a temporary diversion comes into effect on the approach to Baillieston Interchange.

These major works will involve removing 13,000m² of existing carriageway and 40,000m³ of earth to lower the existing road to the connect to the new M8, a distance of approximately 5 metres.

Following the excavation, 1,500m of drainage and 12,000 tonnes of blacktop will then be laid to complete the M8 ‘Missing Link’, allowing the new M8 motorway between Baillieston Interchange and Eurocentral to open to traffic for the first time.

“These scheduled works are a major milestone of the £500m investment in the main route between Scotland’s two largest cities, which will see the completion of the M8 between Glasgow and Edinburgh.

“Whilst delays are inevitable on a project of this scale and complexity, and the impact this has on the travelling public will be significant, these works are necessary to complete the M8 Missing Link. Road users can look forward to realising the benefits of the new motorway when it fully opens to traffic upon completion of these works in Spring 2017.”

During the 10 week diversion, two lanes of traffic will be maintained during peak times and signed diversion routes will be in place on all approaches to Baillieston Interchange including the A8, M8, M73, and the surrounding local roads.

Transport Scotland is warning road users to expect delays on all surrounding routes as a result of the M8/A8 diversion.

All traffic flows will be monitored at key locations throughout the diversion routes.

Further information on this closure can be obtained at http://www.transport.gov.scot/A8diversion

The improvements also include 5km of new pedestrian and cycle paths which run parallel to the new M8 motorway, which are part of 16km of new cycle paths being built between Baillieston and Newhouse.

Ferrovial Lagan JV, a construction joint venture between Ferrovial Agroman and Lagan Construction, is undertaking for SRP the design and construction works to be completed in spring 2017, and Amey LG is responsible for the operation and maintenance until 2047.