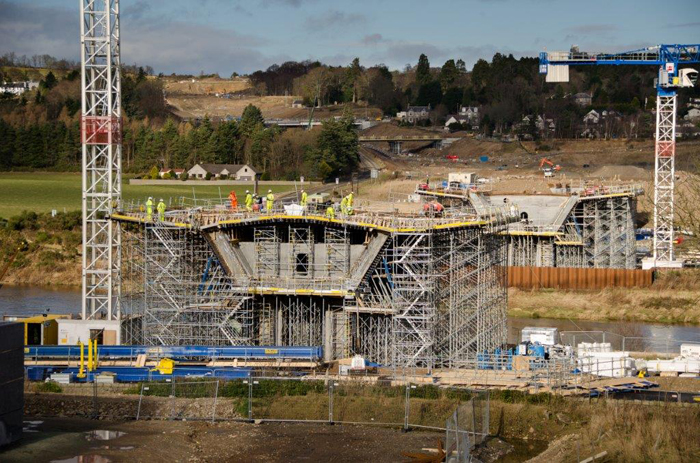 The River Dee Crossing will see significant works over the coming months as the new bridge begins to take shape.

Works on the two hammerhead piers, on either side of the river, are progressing well, which will allow the main superstructure to get underway shortly.

The bridge is a three-span structure with the main centre span over the river at 120m long and two end spans of 75m each. The deck will be a hollow box design and will be constructed using the balanced cantilever technique.

This involves having a pair of cantilever forming travellers (CFTs) which use the hammerhead pier as the initial anchor point and move outwards from the pier in opposite directions, adding concrete deck segments on either side of the pier at the same time - ensuring that the weight of the deck is always balanced.

The CFTs will continue to add segments until they meet in the middle and reach the bridge abutments at the ends of the south and north spans. This should take place late this summer. There will also be pre-stressed cables running through the deck, which will help the bridge to maintain its shape and bear the weight of the traffic using it.

As the deck work progresses over the river, the CFTs will be a striking sight when the segments are being added. Special safety netting will be in place during the works and additional environmental measures are being taken to protect the river and its habitat.