The A82 at Pulpit Rock has offered a significant engineering challenge for decades.

Prior to these works being undertaken, the A82 narrowed at one stretch to less than 5 metres wide, resulting in road users delayed at traffic signals which were in place to reduce traffic to one lane.

The improvement work at Pulpit Rock has seen the removal of these traffic signals, which have been in place for over 30 years, and the stretch of road widened to provide a two-way carriageway. 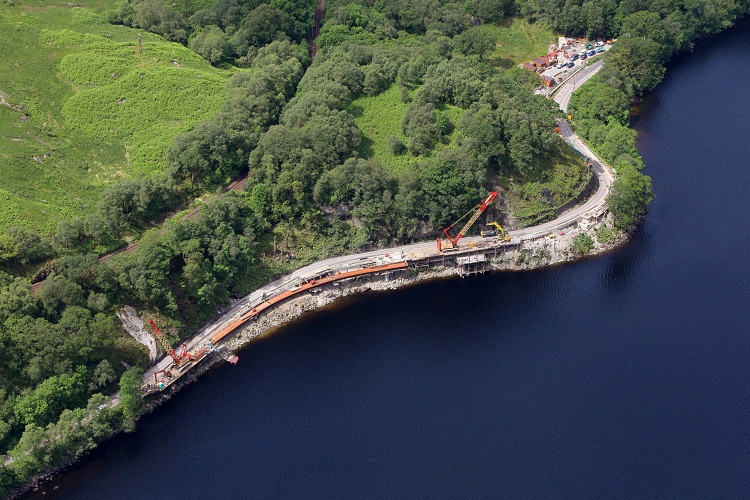 Works progressing on the A82 Pulpit Rock Improvements as the beams are lifted into place.

The improvements to the A82 at Pulpit Rock include a new viaduct running parallel with Loch Lomond, widening of the existing carriageway to the north of the viaduct and the introduction of a two-lane carriageway.

The project will deliver benefits to road users including the removal of traffic signals, improved journey times and a reduction in driver frustration.

The traffic management measures were removed from the site on 8 May 2015.

Transport Scotland has worked closely with McLaughlin and Harvey Ltd to ensure that disruption to road users was was kept to an absolute minimum during the construction works. As part of this, we developed an engineering solution which did not require any full 24 hour road closures on the A82 at Pulpit Rock.

The road closure programme required for construction was developed following a consultation exercise prior to works starting. A total of 117 overnight closures were required during the construction period.