The barriers needed to be replaced as the existing vehicle barrier arrangement did not provide the level of protection required to the bridge towers and cable anchorages against heavy goods vehicle (HGV) impact. 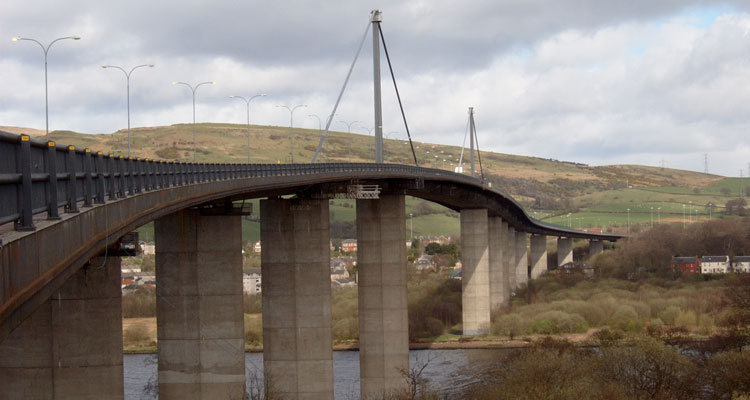 Why was the work needed?

The existing nearside barriers were non-standard with an unknown level of containment consisting of tubular post and double rail.

The replacement barriers  reduce the risk of structural damage to the bridge towers, cable anchorages and nearside deck cantilever sections.

At the same time, we took the opportunity to:

How much did it cost?

Final cost will be determined at the end of the 52 week maintenance period.

What stage is it currently at?

The vehicle barrier replacement works were completed in September 2014.

How will it affect me?

The works represent a significant investment by Transport Scotland and will provide the level of protection required to the bridge towers and cable anchorages against heavy goods vehicle (HGV) impact.

The works were essential to bring the vehicle barriers at Erskine Bridge up to current standards and to ensure the long term safe operation of the bridge.

The following report describes the processes to remove the original barrier and install the new high containment barrier at one post location on the northbound nearside barrier. Each of these processes had to take place approximately 320 times on this side Similar steps were taken in the southbound nearside barrier and the two central reserve barriers. Throughout the project over 1200 new posts were replaced and over 15600m of rails installed.
Construction process report (PDF, 13MB)

What was done to reduce the environmental impact?

The environmental impact of the works was  low as the works involved replacing an existing vehicle barrier on the bridge deck. However, control measures were put in place to protect the local environment.

Documents relating to the Erskine Bridge Contract as released under Freedom of Information (Scotland) Act 2002.

The attached contract documents relate to the A898 Vehicle Barrier Replacement contract carried out by Highway Barrier Solutions between July 2013 and May 2014. Some additional work was carried out at the north approaches following the Commonwealth Games during August and September 2014: