This bulletin provides updates to two National Indicators, which form part of the Scottish Government’s National Performance Framework. The National Performance Framework measures and reports on the progress towards the Scottish Government’s Purpose: creating a more successful country, with opportunities for all to flourish through increasing sustainable economic growth.

Progress towards the Purpose is tracked by 7 Purpose Targets and supported by 16 National Outcomes - describing the kind of Scotland we want to be - and 50 National Indicators, covering key areas of health, justice, environment, economy, and education to measure progress.

National Indicator No. 4: Reduce number of driver journeys delayed due to traffic congestion 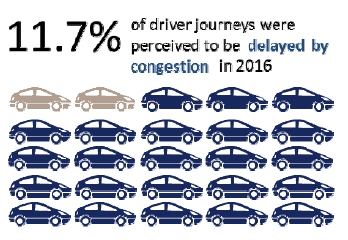 National Indicator No. 48: Increase the proportion of journeys to work made by public or active travel 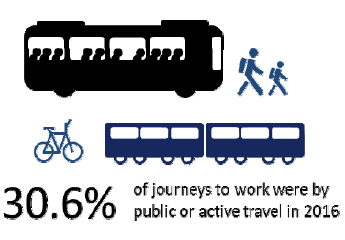 11.7% of driver journeys were delayed due to congestion, a lower proportion than in 2015 (12.4%) and below the 2006 baseline. This figure provides an update to National Indicator 4. A two percentage point change is required to show performance improving or worsening. Since the difference is smaller, the indicator will show performance maintaining.