This section is also available in pdf format (188k)

A fluvial geomorphological survey and assessment on the Headshaw Burn within the vicinity of the proposed Annfield Bridge extension was undertaken on the 12th January 2005. The river was assessed over a 500 metre reach upstream and downstream of the bridge. The nature of the bridge extension was explained on site by Mr David Murphy of the Scottish Borders Council. The assessment was undertaken by Dr David Gilvear and Miss Tory Milner of the Centre for River Restoration Science at the University of Stirling. Dr Gilvear has over 20 years experience in sediment transport dynamics and river channel morphology.

The site characteristics and survey results

The Headshaw Burn is a 1st order tributary of the Leader Water and is designated as a Special Area of Conservation (SAC). At the site of interest a current bridge of 5.35 metres spans the burn (Plate 1). The width of the bridge is and its height above the bed of the burn is 2.76 metres. Scrutiny of the Ordnance Survey 1862 map of the reach shows the channel planform position and geometry and location of bridges to be as it is today Associated with the bridge is a wall reinforcement extending 17 metres upstream (Plate 2) on the left bank and 35 metres downstream on the right bank. The proposal is to extend the current bridge dimensions by 6 metres in width in the upstream direction with a possible further 3 metre extension being proposed if a feeder lane is required. The original bridge span had been designed perpendicular to the A68, appears to have created the meander bend geometry at the bridge entrance and exit. This will have created erosion that is now protected by the walled sections and creation of the partially vegetated point bar at the entrance to the bridge. The plan is to build the bridge extension by sheet piling the burn and in this way maintaining the flow, prevent ingress of fine sediment, and provide a dry environment to construct the bridge footings. 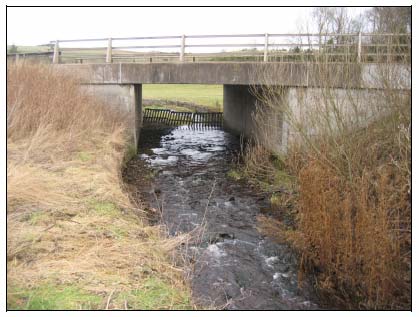 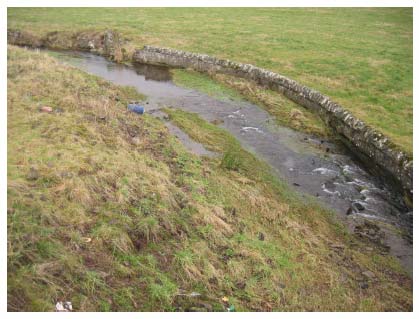 Upstream of the A68 Annfield Bridge an older bridge is present (Plate 3) which carries the D45715 to Carfrae. This has a smaller flow capacity than the Annfield Bridge but Mr David Murphy stated that locals say that it never ponds water behind it.

Plate 3: The old bridge carrying the D4715 over the Headshaw Burn.

The 500 metre reach upstream of the proposed bridge extension is a 3 metre wide gravel bed river. Its bed gradient is approximately 1:100 and composed of mixed gravel and cobbles that appears mobile under flood conditions. The bed would be best described as a plane bed with some flow variability but absence of well marked pools and riffles. As such the reach is typically a headwater stream at some distance from its source. There are no geomorphic features of any major significance upstream or downstream. The plane bed morphology and past river management activity has resulted in an absence of geomorphologically and ecologically significant features such as exposed gravel bars, deep pools, and backwaters. The nature and age of the alluvial deposits in the valley floor through which the stream flows would require extensive survey, coring and research to be dated and their source identified.

The banks along the 500 metre reach are steep and some minor bank slumping is present. Indeed the 100 metre channel reach upstream of the old bridge appears to have been straightened through an area of artificial ground within unusually high banks (Plate 4). This probably took place during earlier upgrading of the A68. The banks are vegetated but absence of river margin trees is noted. Overall the planform and channel morphology appears stable with the bed material being conveyed during flood events.

Plate 4: The Headshaw Burn set deep within a straight channel in artificial ground.

Plate 5: The geomorphic character of the channel downstream showing the nature of it bed, its uniform bank morphology and fenced margins. 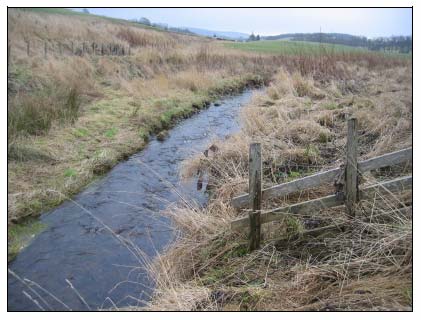 Downstream of the Annfield bridge, the stream is very similar to upstream and once again appears to have been artificially modified (Plate 5), but in this case, for land drainage. The channel deepening has appeared to create headwater erosion that has been thwarted by a log placed across the channel which acts as a very small weir. As with upstream the plane bed morphology and past river management activity has resulted in an absence of geomorphologically and ecologically significant features such as exposed gravel bars, deep pools, and backwaters.

The Bridge extension design and upstream and downstream reaches

The geomorphic assessment demonstrates no geomorphic impact of the proposed bridge extension whether it be a 6 or 9 metre extension. Once completed the channel bed will not be constricted, flow conveyance will not be throttled and the "natural" sediment dynamics (bedload and suspended load) of the reach unaltered. As such it will not impact significantly on ecological status of the river reach, nor upstream and downstream.

The channels upstream and downstream of the bridge although maintaining a natural bed that is typical of such a geomorphic setting have been degraded by past river management and agricultural activity. The most significant degradation is the limited number of river margin trees. The past dredging, straightening and bank protection has also produced a rather uniform river bank and uniform planform characteristics. This is not highly significant in terms of the whole river system but suitable river restoration techniques could assist with improvement in ecological status of the reach.

This will create a minor temporary narrowing of the channel due to the sheet piling but river discharge and sediment transport will be unaltered.