This section is also available in pdf format (260k)

The traffic appraisal has been based on surveys undertaken in 2006 from which a local traffic model was created. The existing road network is shown in Figure 4.1.

The traffic effects are described for the A82(T) as well as changes in traffic on the wider network. The environmental implications of the predicted changes in traffic flows are reported elsewhere in the ES, in particular the chapters dealing with disruption due to construction (Chapter 12), noise and vibration (Chapter 13), air quality (Chapter 14), pedestrian, cyclists, equestrians and community effects (Chapter 15) and vehicle travellers (Chapter 16).

The completion of the A82 Crianlarich Bypass would result in the transfer of A82 through traffic onto the new route and a reduction of traffic through the village of Crianlarich.

Traffic flow changes have been predicted using modelling software, NESA (Network Evaluation from Surveys and Assignment). NESA has been developed by Transport Scotland for the traffic and economic appraisal of trunk road schemes. The primary purpose of the traffic model is to predict the main traffic effects and provide a cost - benefit analysis for the scheme.

The modelled area follows the length of the A82 route through Crianlarich (the Glenfalloch and Tyndrum roads). It also includes the A85 in the village. The main side roads such as Tyndrum Terrace have been modelled along with the effect of restrictions that the existing rail bridges in the village have on general traffic speeds.

The traffic effects of the scheme have been modelled for the following years:

The traffic flow predictions produced by the NESA modelling are discussed in Section 4.4.

4.3 Effects on Traffic Levels during Construction

Various construction activities would require the removal and delivery of materials during the course of the 12 month construction period. The activities are summarised in Table 4.1.

There would also be general activity on the road network with contractor’s vehicles moving between the site compound and various parts of the site. In overall terms the increase in heavy good vehicle (HGV) movement would be significant, with an increase of approximately 60 movements per day over the construction period. A worst case scenario would be that all these movements passed through the village centre. The existing HGV movements at the A82/A85 junction are approximately 330 HGV per day (annual average). The worst case would therefore generate an increase of 18%. It is however likely that HGVs would be routing to a variety of destinations.

4.3.2 Disposal and Import of Materials

The identification of approved receptor sites for the disposal of excess materials associated with earthworks and the import of bulk materials required to make up design levels would be the responsibility of the contractor who would be required to meet all legal obligations relating to licensing and planning approvals if required.

Where such import and export of materials is required, haulage routes would be subject to agreement with Transport Scotland. Specific consideration would be given to the potential sensitivity of communities located along potential routes when choosing routes

Options for the import of concrete and road pavement products have also been investigated and a number of potential supply sources identified. These are illustrated in Figure 4.2 and Table 4.2. 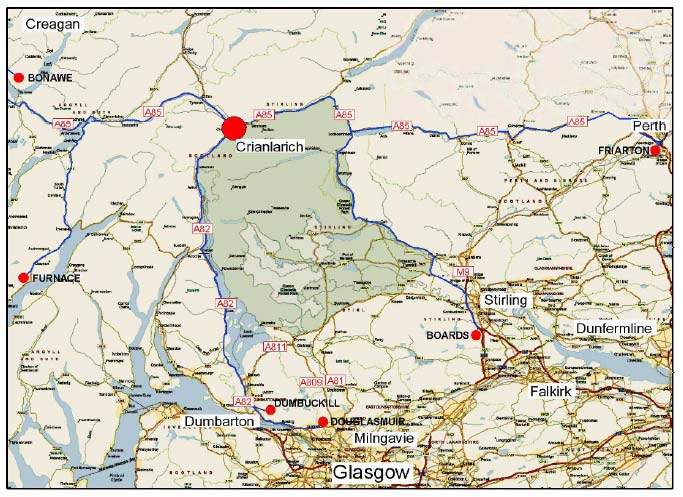 4.3.3 Possible Alternatives to the Trunk Road

The proposed bypass would remove through traffic using the current A82 route through the village (Glenfalloch and Tyndrum roads) as it would provide a quicker and more direct route. Traffic flows on the route are seasonal with the highest flows during the summer period of July and August. Annual average daily traffic (AADT) on the new bypass is predicted to be 2,700 vehicles per day, two way. Traffic flows on the existing A82 route at scheme opening would reduce from 5,700 AADT to approximately 3,000 AADT on the western section and 3,400 AADT to 700 AADT on the southern section. These effects, as well as the forecasts for the design year, are shown on Figure 4.1.