2. NEED FOR THE SCHEME

Ba Bridge is a three span reinforced concrete beam and slab structure, supported on masonry-faced mass-concrete piers and abutments, with a height of approximately 2.5 m above river level. It has parapets of coursed masonry (Figure 2.1).

Figure 2.1 The western side of the existing Ba Bridge. 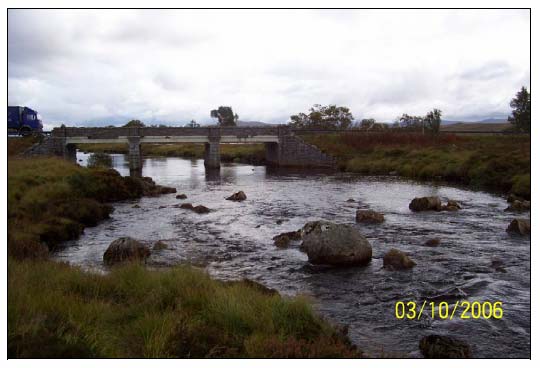 An inspection of the bridge structure, undertaken by Jacobs Babtie in 2002, as part of a regular biennial inspection, requested by the Scottish Executive, revealed that it failed to meet the statutory structural assessment to BD21, which is the technical standard giving the applied loading to be utilised for the assessment of road bridges. The structural requirement for trunk roads is an Assessment Live Loading (ALL) of 40 tonnes. Ba Bridge was assessed to have an ALL capacity of 7.5 tonnes.

This assessment concluded that the existing bridge structure was under strength and in need of repair to comply with British structural requirements for trunk roads. For a structure not to be signed with a weight limit it must be capable of supporting a 40 tonne ALL. New Trunk Road Bridges must be designed to carry full HA 40 Tonne loading and checked to 37.5 / 45 units of HB loading (150t/180t abnormal vehicle), according to BS5400 Part 2 Specification for Highway Loading.

Jacobs Babtie (formerly Babtie Group) were commissioned by BEAR Scotland (NW Unit) to provide consultant services associated with the future management of seven under strength structures on the A82 Trunk Road between Bridge of Orchy and Glen Coe village. The options report identified that there was no alternative to that chosen. A single span was at one point considered, but this was found to be unfeasible.

A report produced by Babtie in June 2002 ("Rannoch Moor/Glen Coe Assessment Review/Options Appraisal") considered the available courses of action required by BD21 in the event of a bridge structure falling below the 40 tonne ALL capacity. These are stated to be propping, strengthening, repair or closure. Propping is considered as a temporary measure in advance of strengthening, repair or replacement.

The report compared and considered the advantages and disadvantages of various strengthening and replacement options. Subsequently, discussions with both BEAR and the Scottish Executive concluded that on a value for money basis, the preferable solution for the structure was to provide a full bridge replacement. This is in recognition of the fact that, while there is an additional capital cost associated with the construction of a new structure, there are significant long-term benefits, including reduced maintenance costs. The reasoning for the current choice included the poor condition of the existing bridge, the difficulty in strengthening it and the aim to minimise future maintenance and environmental impact.

In 2002 while the Scottish Executive Development Department (SEDD) developed proposals for the replacement of seven bridges on the A82 (T) Road in the Rannoch Moor and Glen Coe area Jacobs Babtie was commissioned to undertake the environmental scoping for the seven bridges following the Scottish EIA guidelines for any construction work. The results of the study were reported in "A82 Rannoch Moor and Glen Coe Bridge Replacements – Environmental Scoping Study Final Report" (Babtie Group 2003). All seven bridges had failed to meet the desirable minimum load carrying capacity (40t) required for Trunk Road structures.