7. ROAD DRAINAGE AND THE WATER ENVIRONMENT

This section examines how the proposed replacement of the Ba Bridge on the A82 Trunk Road in Rannoch Moor will affect the road drainage and water environment within the vicinity of the scheme footprint (Figure 1, Appendix A) during the operational phase of the scheme. Bridge schemes have the potential to impact upon the water quality and drainage of an area through direct and indirect impacts, road pollutants entering watercourses and alteration to the local hydrology. It has been assessed that the potential operational impacts of the scheme are inorganic and organic pollution, sediment loading, changes in discharge regime with a resultant impact on sediment transport and fluvial geomorphology. The majority of the impacts will be associated with the construction phase, and are discussed further in Chapter 10.

This section has been prepared in general accordance with the principles and techniques outlined in ‘The Design Manual for Roads and Bridges (DMRB), Volume 11 (Environmental Assessment), Section 3 Environmental Assessment Techniques, Part 10 – Road drainage and the water environment’. The aims of this section are to: (1) establish the baseline water quality and natural and anthropogenic drainage within the vicinity of the scheme footprint; (2) assess how the scheme will affect local water quality and drainage; and (3) detail any mitigation measures required to minimise impacts on the water quality and drainage within the vicinity of the scheme footprint.

The assessments were based on desk study of relevant plans, maps and documents, consultation and a walk-over survey of the scheme extents and wider environment by a hydrologist/fluvial geomorphologist. There will be no assessment of the pollution impact from accidental spillages.

A geomorphological study is presented in Appendix B. The study is based on findings from a desk study and site visit. This represents a reconnaissance style appraisal rather than a detailed geomorphological dynamics assessment, as this requires process monitoring and is beyond the scope of the appraisal. The desk-based approach, conducted prior to and following the field visits, concentrated on reviewing existing project documentation, site maps and existing geomorphological publications. The desk study was designed to place the river reach at Ba Bridge into the context of the wider catchment. The field visit focused on determining bridge specific baseline conditions, including contemporary channel morphology, channel bed and bank characteristics and the quantities and size of sediment within the river channel. Data collection involved note taking, the production of geomorphological maps, and photography. The interpretations and predictions made in this report are based on professional judgement.

The bridge scheme sits within the River Ba Catchment (Figure 1), which is a sub-catchment within the River Tay catchment area, and drains an area approximately 40 km2 (Figure 7.1). The waterlogged condition of the ground and the poor quality of the vegetation as grazing for stock has made most of the site unsuitable for agricultural use. However, there has been relatively intensive cattle grazing on the Moor in the past. Historically, it is likely that peat cutting took place in the vicinity of all bothies, including Ba Cottage. It is well documented that the moor supported an extensive cover of pine during the Holocene, however, due to human activities the Moor is now devoid of extensive natural tree cover (Figure 7.1). There are small pockets of plantation forestry within the Ba catchment. 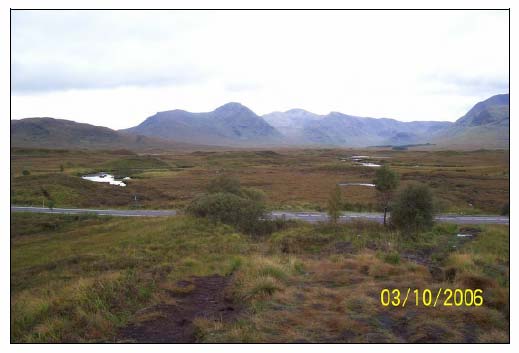 The River Ba drains a mountainous catchment area to the west of the bridge. To the south, streams drain from Stob a’ Choire Odhair and Stob Ghabhar, to the west they drain from Aonach Mor, and to the north they drain from Clach Leathad and Meall a' Bhuiridh, the highest of the mountains at 1108 m. The numerous mountain streams converge to form the River Ba, which itself has its source in Coireach a’ Ba, immediately west of Aonach Mor. The area has a high gradient with water flowing from a maximum elevation of 1108 m to 290 m OD at the bridge. Within the catchment there are several small lochs. Because of the steep gradient, the hydrology is likely to be flashy and highly responsive to rainfall and snowmelt, however, some of this responsiveness will be attenuated by the smaller lochans and the larger lochs (Loch Buidhe and Lochan na Stainge) immediately upstream of the bridge. Immediately downstream of the bridge the River Ba flows into Loch Ba and subsequently into Loch Laidon.

According to data from the SEPA gauging station at the neighbouring Linne nam Beathach at Victoria Bridge, the average annual rainfall for the area is 2956 mm. 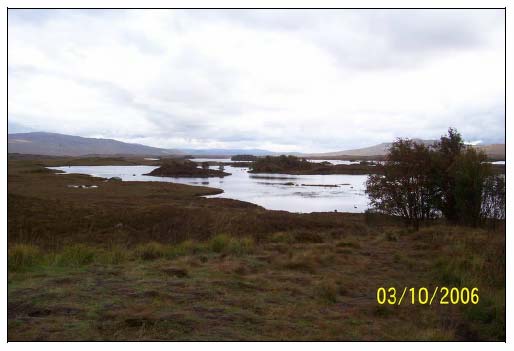 Within the study area of the scheme, the River Ba is the only natural watercourse. In the vicinity of Ba Bridge the river has a relatively low gradient with low stream power (Figure 7.3). It was approximately 20 m wide at the time of survey and the depth was approximately 0.5 m, averaged over the width of the river. The flow is characterised by pools and riffles, with zones of faster flowing water (Figure 7.4) and zones where the water appears motionless (Figure 7.5) and even small areas of backflow. The river banks are low and well vegetated (Figure 7.6). However, the banks within the water are steeper and can be composed of bedrock, boulders, cobbles, sandy diamict glacial deposits, peat or possibly regolith (Figure 7.7). The lichens on the in-stream boulders suggest that flood flows rarely rise more than 40 cm from base flow (Figure 7.4). The bed material consists of cobbles and gravel with large boulders protruding through the water surface (Figure 7.8). There is only one section of fast flow between the two lochs about 50 m west of the bridge, in a section of the river with many in-stream boulders (Figure 7.4). It should be highlighted that this river is very natural, and except for the construction of the bridge has undergone very little anthropogenic modification. 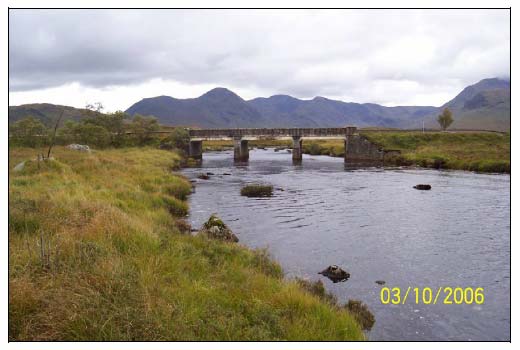 Figure 7.5 Areas of slow flow in the River Ba. 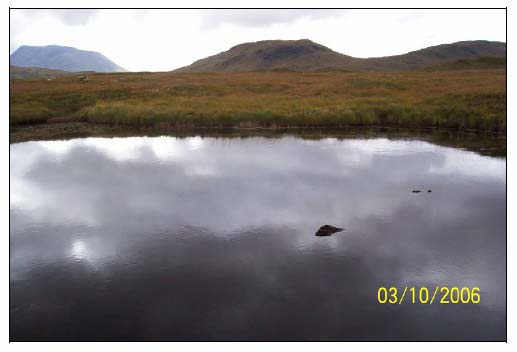 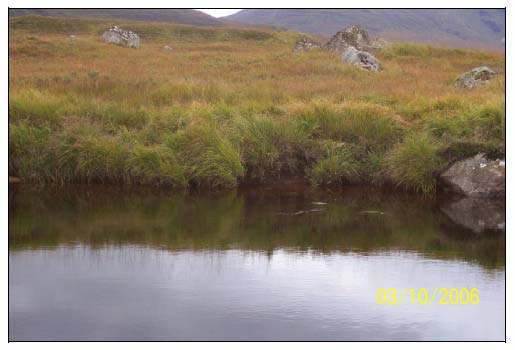 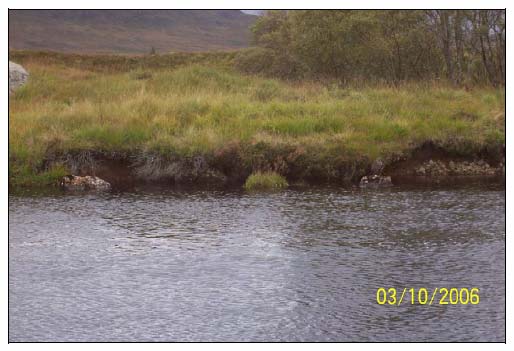 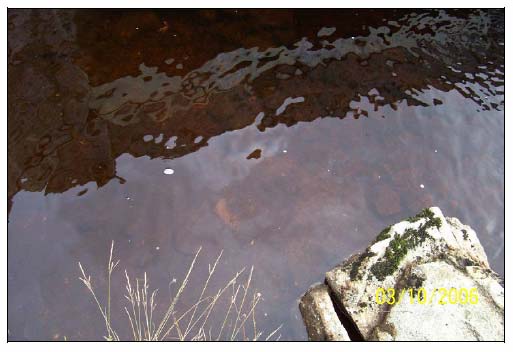 The protection of water resources has become increasingly important under the terms of the Water Framework Directive and is particularly relevant due to the ecosystems that may be affected by proposed developments, either directly or indirectly. The Water Framework Directive was transposed into Scottish law through the Water Environment and Water Services (Scotland) Act 2003 and requires that all water bodies must meet specific environmental objectives in order to achieve at least Good Ecological Status by 2015 with no deterioration in status in following river basin planning cycles. Heavily Modified Water Bodies will be required to achieve ‘Good Ecological Potential’ under the legislation.

SEPA are in the process of moving towards a new surface and groundwater classification scheme which is required under the Water Framework Directive. This new scheme will report status or potential of water bodies, however, currently they are still using the existing River Classification Scheme to report water quality of rivers throughout Scotland. Generally only watercourses with catchment areas larger than 10km2 are included, therefore many smaller watercourses may remain ‘unclassified’. The scheme is based on a five point scale and runs from A1 (excellent) to D (seriously polluted). The River Ba was last classified as A2 ‘Good’.

The River Ba has been risk-assessed by SEPA as a 2b waterbody which means that it is not at risk of failing to achieve Good Ecological Status in 2015 under the terms of the Water Framework Directive.

Figure 7.9 Embankment-toe drainage ditch on NE side of Ba Bridge. 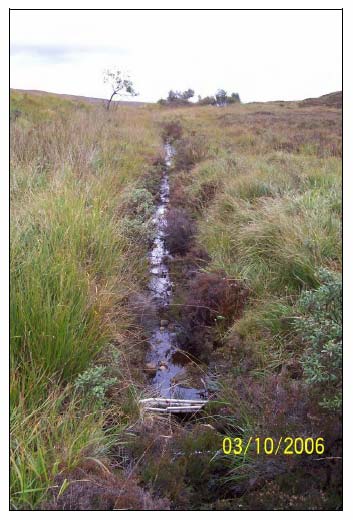 The active fluvial geomorphological processes operating at Ba Bridge are the transportation and deposition of sediment, and erosion of bed and bank material under flood conditions. The relatively short, low gradient section of river means these processes are infrequent and of low magnitude due to the low energy of the river.

The importance of hydrological features within the vicinity of the scheme footprint has been classified using criteria set out in the DMRB V11, Section 3, Part 10 (Table 7.1).

DMRB criteria (Table 7.2) have been used to estimate the magnitude of an impact on an attribute, because there are no specific criteria set out for hydrological features.

Table 7.2 Criteria for determining the magnitude of impact.

The impact of the replacement of the Ba bridge upon the hydrological features within the vicinity of the scheme footprint is estimated using Table 7.3. The impact of effects (either beneficial or adverse) is a function of the importance of the attribute and the magnitude of impact.

Table 7.3 Significance of the impact of the scheme on local hydrology and water quality

The following description of the predicted impacts of the proposed scheme is based on an assessment of the scheme in the absence of any mitigation, which would regulate discharge and minimise pollution. The impacts are described first in relation to changes in the hydrological regime and, second, in relation to the effects on water quality.

There will be no noticeable changes to the regime of the hydrological system within the study area as a result of the bridge replacement, during either the construction or operational phases. The existing in-stream piers are to remain in situ, thus the local flow regime will be unaltered. There will be no significant increase in sedimentation to the watercourse post construction because the areas excavated will have been small and flat so any surface water runoff generated on these areas will be unlikely to transport material. Furthermore, excavated areas will be several metres from the channel banks and silt traps will be installed to ensure that sediment is prevented from entering the watercourse. During the operational phase, surface-water discharge from the road will not drain directly into the River Ba as it currently does, but will discharge into a roadside swale east of the bridge via a combined kerb and drainage system. There will be a slight increase in the amount of run-off from the bridge due to the increased area of hard standing. However, because the surface water will be diverted through catch pits and into a swale rather than running directly into the river the water quality is predicted to improve downstream of the bridge providing a moderate beneficial impact to water quality.

Full consultation with SEPA indicated that there were no issues with flooding. In addition, there are no properties within the area which could be considered at risk, the road is on raised embankments and attenuation is provided by the lochs at either end of the small section of river running underneath the bridge.

No significant cumulative impacts have been identified in relation to the water environment.

The existing road drainage discharges directly into the River Ba, the proposed design will result in surface-water runoff being diverted into a swale that will start 40 m south of the River Ba and discharge into the river downstream of the bridge. This will help to improve the water quality of the surface water entering the river through the filtering out of sediment and pollutants.

Catch pits will also form part of the drainage scheme and these will also attenuate run-off and help to reduce sediment and pollutants entering the watercourse.

Silt traps will be installed during all construction works in order to intercept surface water run-off and prevent siltation of the river. They will be checked and maintained throughout the duration of the works.

In addition, the Scottish Environment Protection Agency Pollution Prevention Guidelines will be strictly adhered to during both construction and operation phases. Mitigation measures specific to the construction phase are outlined in Chapter 10 - Disruption due to construction.

The minor change in road drainage and the fact that there will be no change in the number of road users will result in an improvement in the level of organic and inorganic road pollutants entering the River Ba, thus improving the water quality.