The identification of existing and potential problems within the transport and land-use system under consideration forms the starting point for the development of a transport proposal.

A key element in the STAG process is to be able to recognise the root causes of any identified problems within the study area and to develop transport improvement options that address the underlying issues. Identified problems should be supported by an analysis of available opportunities and an understanding of the constraints and uncertainties that may impact on the success of a proposed transport improvement option. Wherever reasonably practical, problems should be quantified in order to gauge the scale of the problem and to assist in defining appropriate targets as part of the established transport planning objectives.

In the case of the Aberdeen to Inverness Transport Corridor Study, the identification of initial problems has led to the collection of additional information to assist in defining conditions within the corridor including in particular data on journey times along the route, trends in road safety and passenger volumes at the rail stations within the corridor.

The identification of problems within the existing transport corridor was an important process in the development of appropriate transport proposals for the future.

From the responses received during the consultation process, the following issues have been identified as the perceived current transport problems along the corridor.

Given the comments regarding journey time reliability received during the consultation process, the current speed limits and road markings along the A96 trunk road have been established to assist in defining current operating conditions and overtaking opportunities along the route. This information is illustrated in Figure 4.2.1.

The results from the June 2006 journey time surveys are shown in Figure 4.2.2. This Figure also highlights the 50 mph threshold to provide a measure of consistency in journey times.

Given the comments regarding road safety received during the consultation process, the individual kilometre sections where the accident rates and severity ratio exceed the equivalent national values are shown in Figures 4.2.3 and 4.2.4 respectively.

From the responses received during the consultation process, the following issues are perceived to be the future transport problems along the corridor.

In addition to the issues identified above, some additional perceived problems were identified during the first workshop. These include:

The information set out above was used as the basis for identifying, and quantifying wherever possible, the key transport related problems along the Aberdeen to Inverness transport corridor and to assist in the development of local transport objectives. The key problems are as follows:

Figure 4.2.1a Existing A96 Carriageway Characteristics 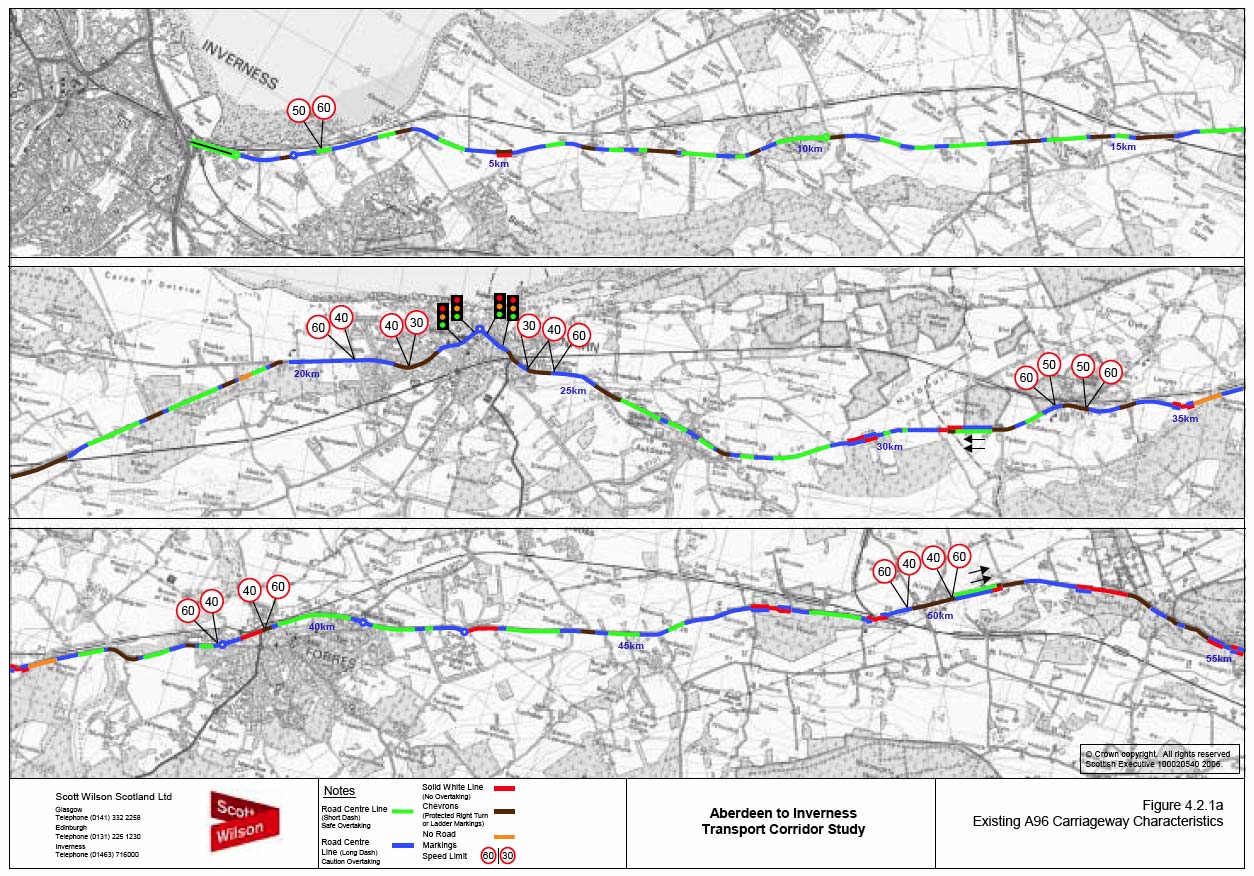 Figure 4.2.1b Existing A96 Carriageway Characteristics 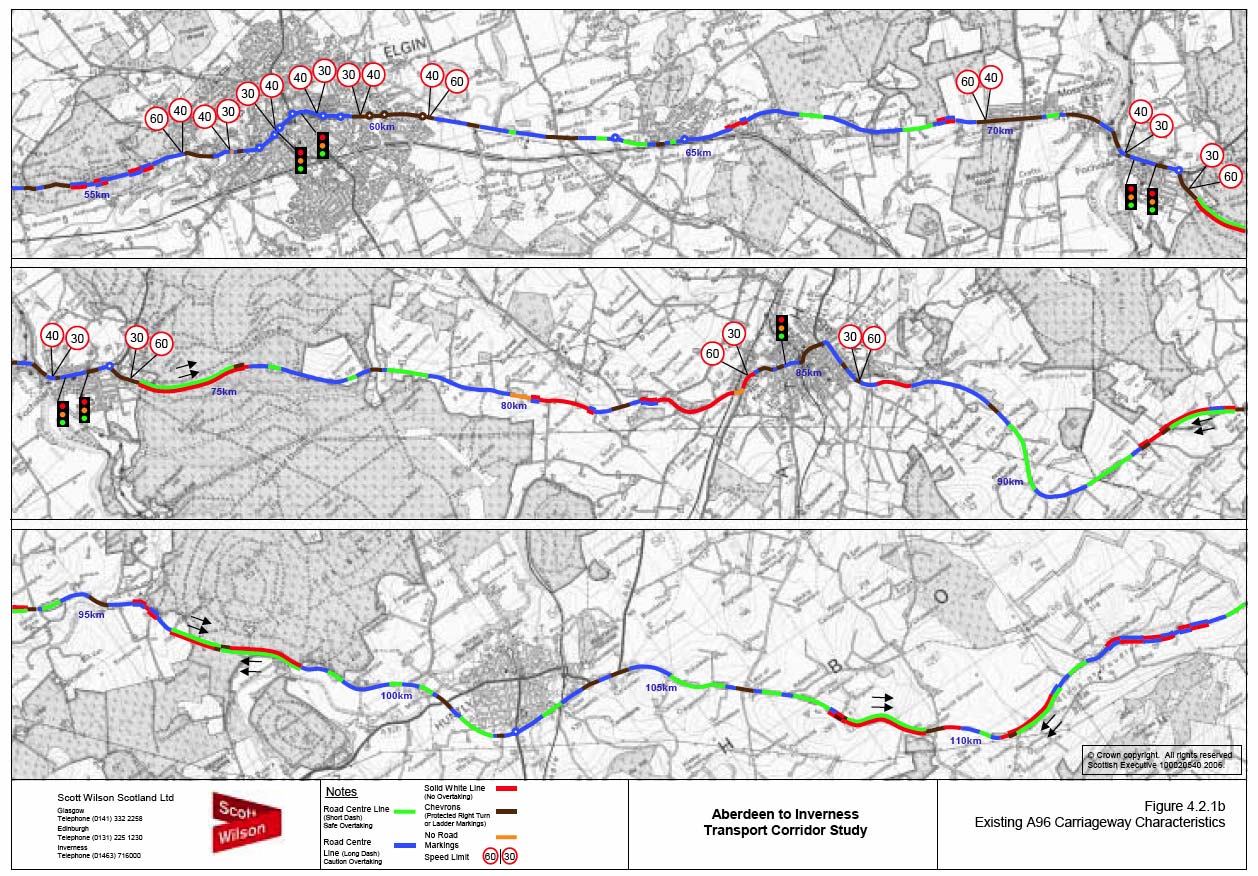 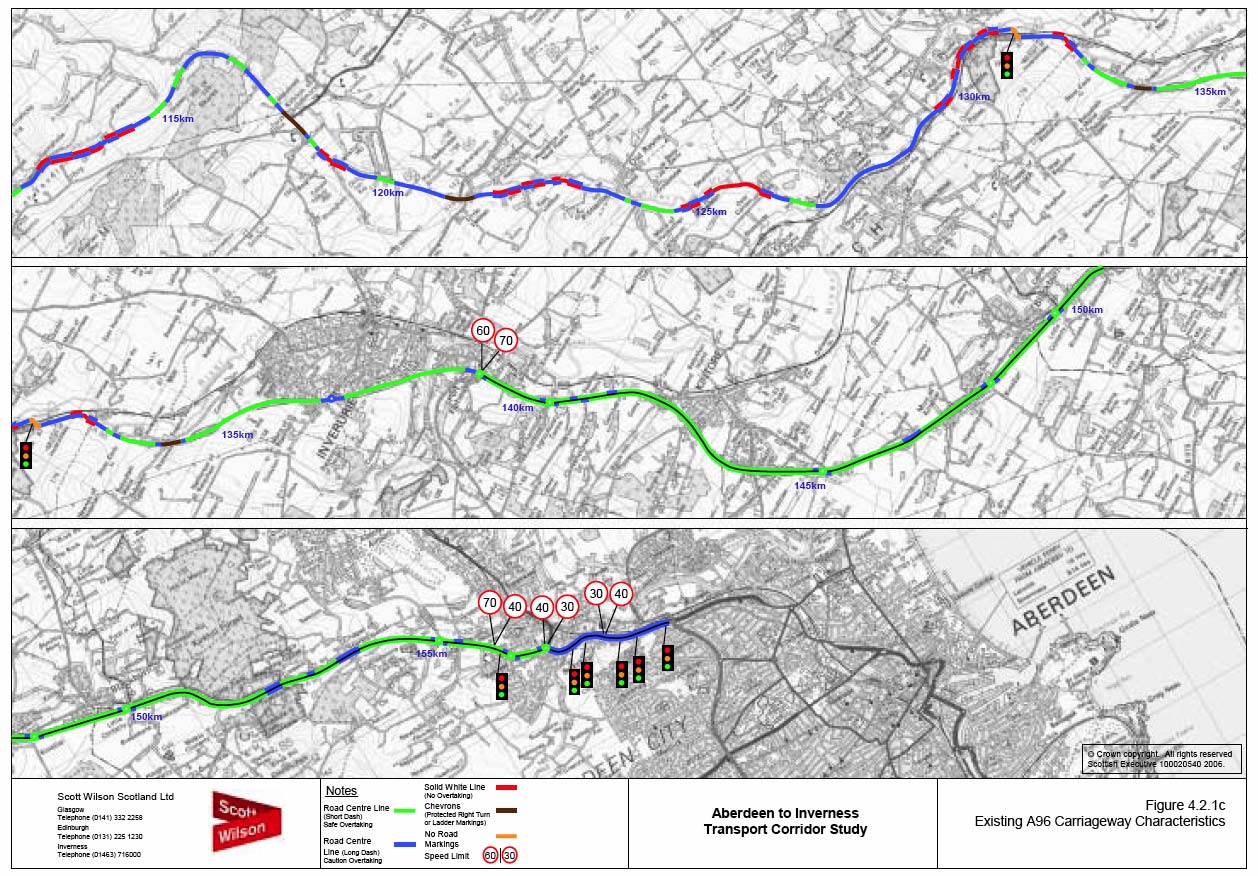 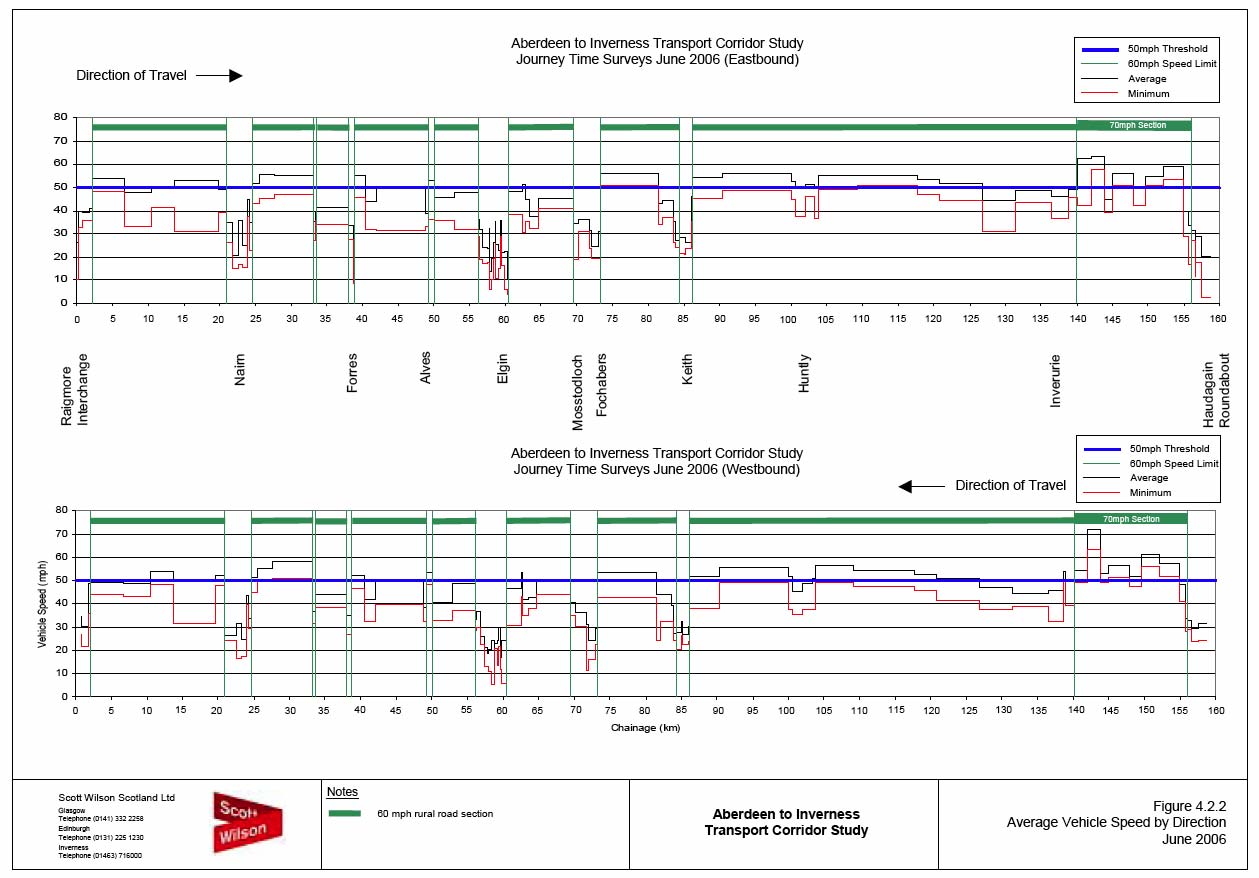 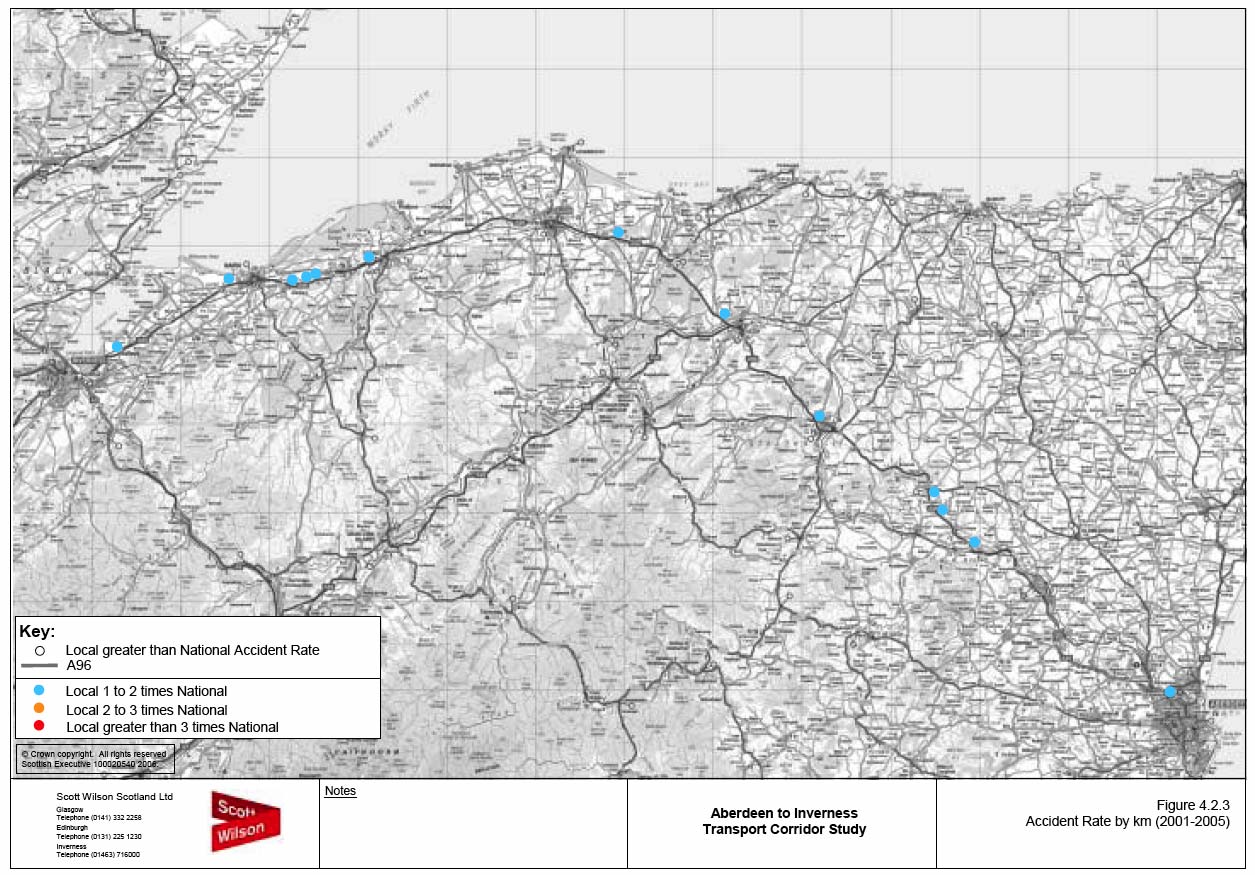 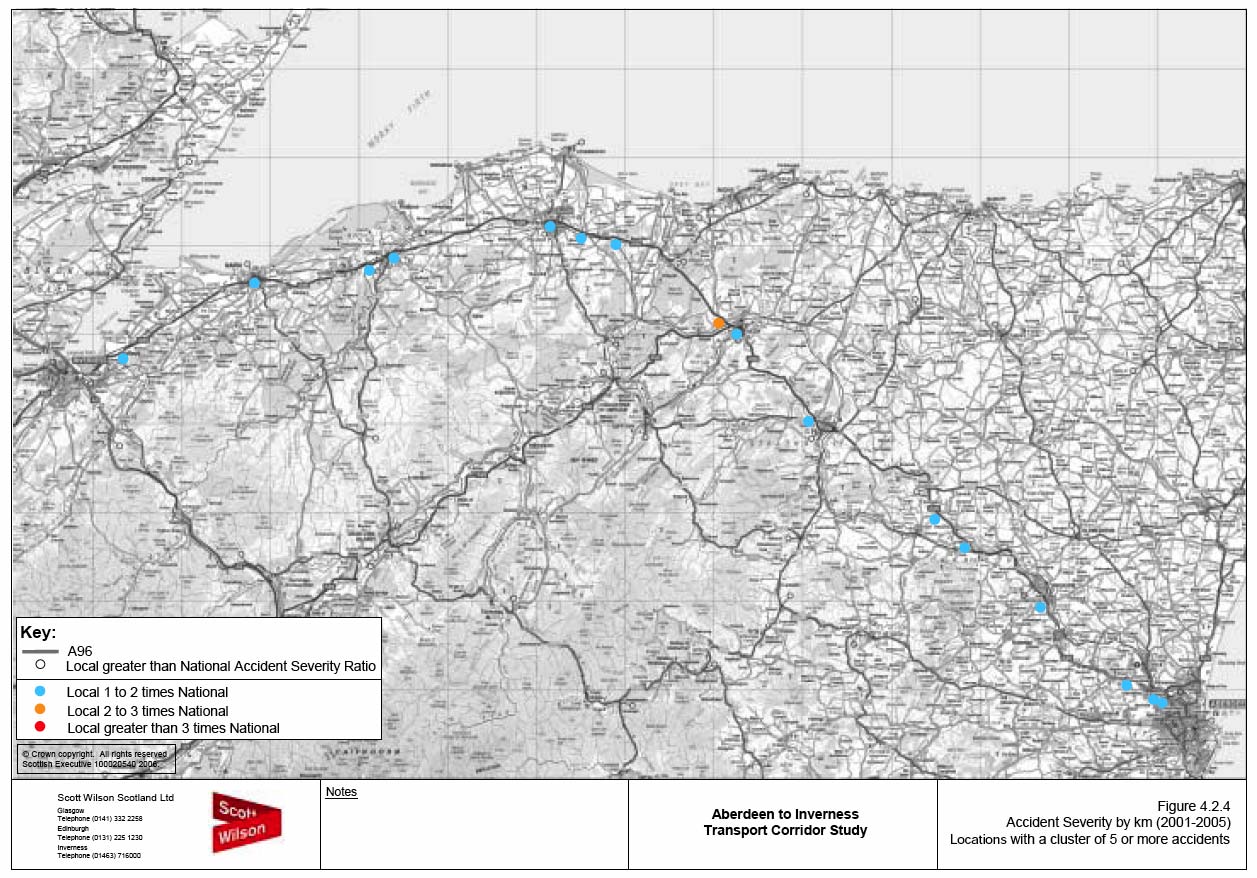