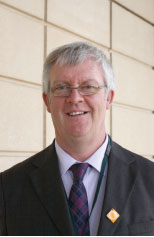 I am pleased to present the Transport Scotland Annual Review for 2011/12' reporting on some of our headline achievements over this period.

Transport has an important role to play in supporting our businesses and communities as well as connecting people across Scotland and beyond. The Scottish Government recognises this important role and has continued to make a substantial investment, with over £1.7 billion invested in transport projects and services over the year. Working in support of the Cabinet Secretary for Infrastructure and Capital Investment, Alex Neil MSP and the Minister for Housing and Transport, Keith Brown MSP, Transport Scotland are responsible for these projects and services that all help to deliver the Scottish Government's Purpose of increasing sustainable economic growth.

Progress continues on our road and rail projects, with the Forth Replacement Crossing, M8 M73 M74 Motorway Improvements and Edinburgh Glasgow Improvement Programme all pressing ahead. A range of other projects and work streams are highlighted in this Review including investment at the A83 Rest and Be Thankful, our Rail 2014 consultation, award of our Freight Facilities Grant and details of our Carbon Management Plan. We also announced funding for the modernisation of the Glasgow Subway and committed to support Glasgow's Fastlink scheme. These tasks, along with others, bring significant economic benefits and make a real difference to the people and businesses of Scotland.

We also work on a variety of policy issues. This year we made improvements to the Blue Badge scheme and modified terms on the Bus Service Operators Grant to encourage more sustainable operations. We are also working with a broad range of other bodies to encourage a move to low carbon transport and deliver on the Scottish Government's climate change policy.

In September 2011, Ministers announced that we would work in partnership with the City of Edinburgh Council to oversee the final delivery of the Edinburgh trams project.

And finally, an additional government funding package of £79 million was announced in February 2012 to help us deliver a range of new transport projects across Scotland.

Our Annual Report and Accounts will be published later this year and will include more detailed information on our activities during 2011/12.