Construction of the Forth Replacement Crossing (FRC) began in 2011. The project remains on time and on budget for completion in 2016, with the Contact and Education Centre also progressing on schedule to be completed by autumn 2012. 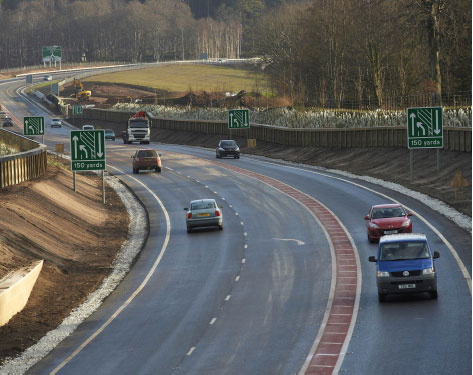 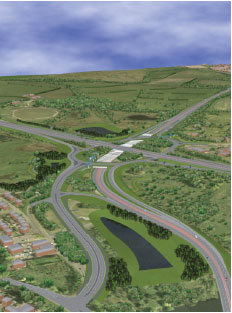 The process for naming the new bridge was announced in March 2012. An advisory panel made up of independent civic, business and community representatives from across Scotland, will be established and responsible for gathering and assessing suggestions from members of the public. It is anticipated that the public vote and formal selection of the new name will take place in 2013.

In March 2012 the Official Journal of the European Union (OJEU) notice for the M8 M73 M74 Motorway Improvements was published. This signals the start of procurement and we are engaging with the construction industry seeking expressions of interest from companies wishing to tender. This new project with an estimated construction cost of £415 million combines plans to upgrade the A8 Baillieston to Newhouse, complete the motorway between Glasgow and Edinburgh, improve the Raith Interchange and widen key sections of the M8, M73 and M74. The project is expected to shave up to 18 minutes off the journey time for around 115,000 vehicles on the busiest sections of the M8 per day. 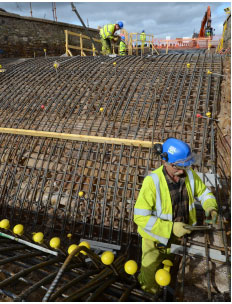 Strengthening of the A92 Edenbank Bridge
(courtesy of BEAR (Scotland) Ltd) 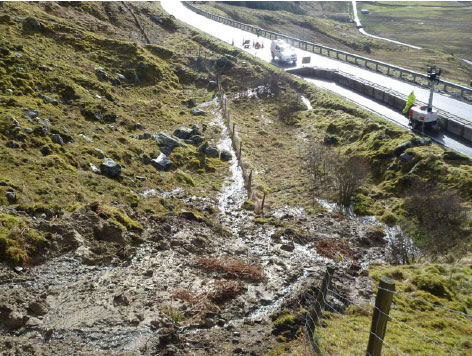 Landslip at A83 Rest and Be Thankful
(© Crown copyright)

The A83 trunk road at the Rest and Be Thankful in Argyll is an area prone to risk from landslips which can be triggered by periods of heavy rain. Since the landslips at the Rest and Be Thankful in 2007 and 2009, we have invested approximately £700,000 in prevention and early warning systems and in February 2012 the Transport Minister, Keith Brown, announced further investment worth £1 million to develop additional contingencies and mitigation work to help deal with future landslips.

Transport Scotland completed essential repairs to the A92 Edenbank Bridge in October 2011 five weeks ahead of schedule. The repairs were required after a planned inspection found the structure could no longer carry modern traffic loads. The bridge was strengthened and refurbished to current standards, offering improved safety for central Fife trunk road users and ensuring Edenbank Bridge's future durability.

During the year, other significant milestones completed on time and on budget included:

There are a range of other planned road projects that, along with those above, will help support businesses, communities and tourism.