In addition to the introduction of new Edinburgh - Glasgow Improvement Programme (EGIP) services Transport Scotland, in partnership with Network Rail, has delivered a number of key infrastructure improvements including the electrification at Haymarket Tunnel. 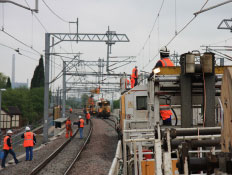 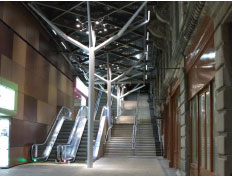 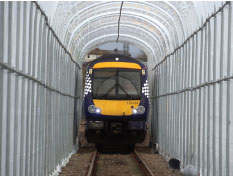 An example of the polytunnel, to help de-ice trains during severe weather
(Courtesy of ScotRail)

In January 2012 Network Rail announced a £55 million package of contract awards in respect of route clearance works in advance of the EGIP route electrification and the redevelopment of Haymarket Station.

The re-opened Airdrie to Bathgate Rail Link resulted in a large boost in passenger numbers along the route. Four trains per hour were introduced in May and usage figures at Armadale, Blackridge and Caldercruix are on target to meet their initial forecasts. ScotRail also increased services between Inverness and the central belt on the Highland mainline as well as Edinburgh - Dunbar and Glasgow - Dundee routes.

Through the Scottish Government's investment in rail services' ScotRail provides around 2'300 train services every day in Scotland. In 2011/12 over 80 million passenger journeys were made, an increase of over 30% over the last eight years. ScotRail completed its commitment to Scottish Ministers to invest £40 million with around £20 million delivering front-line passenger facilities including new lifts at Haymarket, ticket office refurbishments, new toilets, platform shelters, customer help points and CCTV.

The £430 million invested in new class 380 trains has delivered around 7,500 extra seats on routes in Ayrshire, Inverclyde and Lothian. This has allowed a further cascade of existing rolling stock to provide additional capacity on peak services on routes in and out of Glasgow, delivering more than 1,100 extra seats.

A wide-ranging consultation into rail passenger services was carried out, the results of which will inform decisions on the next ScotRail franchise and future funding arrangements for Network Rail. The Rail 2014 consultation ran from November 2011 to February 2012 and involved meetings and events across the country. It generated considerable interest and over 1,200 responses were received.