Ferguson Shipbuilders, Port Glasgow, were named in November 2011 as the preferred bidder for two new hybrid ferries for use on the Clyde and Hebrides network. These vessels, which will place Scotland at the forefront of low carbon maritime technology, are being built for Caledonian Maritime Assets Ltd, a company wholly owned by Scottish Ministers. Transport Scotland will be providing some £20 million in loans for the construction of the two vessels.

The Falkirk Wheel, which links the Union Canal to the Forth and Clyde Canal
(© British Waterways Scotland) 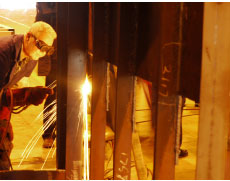 Construction on one of the hybrid ferries
(© Andrew Flockhart, CMAL) 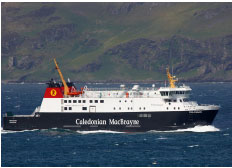 Two significant policy initiatives were announced in November and December. Firstly, plans for the Road Equivalent Tariff (RET) scheme for passengers and cars, including small commercial vehicles to become permanent in the Western Isles, Coll and Tiree, and for RET to be rolled out to other West Coast islands within the term of this Parliament. Secondly, the launch of the Draft Ferries Plan for Scotland for consultation. Over 2,050 responses were received and these are currently being analysed with a view to publishing the Final Ferries Plan later in 2012.

We undertook necessary preparatory work to enable British Waterways to operate on a self-standing basis in Scotland once its assets and functions in England and Wales transfer to a charity. Close co-operation with British Waterways and the Department for Environment, Food and Rural Affairs was required during this work.

During the year we awarded two Freight Facilities Grants totalling £0.4 million to new water and rail freight facilities and provided £1.1 million to support a further 13 rail and water freight services which transfer freight from our roads.

We have continued to work with airlines and airport operators and with other Scottish Government agencies on the development of direct international routes to Scotland to foster inward investment, business and inbound tourism traffic.