We have begun the implementation of our Carbon Management System and have collected data on our corporate carbon emissions including business travel, utilities usage and supplier consumption. 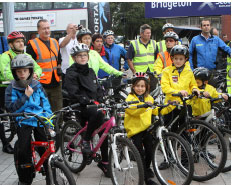 Our Pavement Forum has led a collaborative approach with industry to develop innovative methods of pavement construction for the Scottish Trunk Road network. Working together with other roads authorities, research organisations, practitioners and contractors, we have developed the specification for a new quieter, longer life, thin surfacing material called TS 2010.

We work jointly with other agencies and stakeholders to ensure we play our part in the protection and enhancement of the environment. Together with SEPA (Scottish Environment Protection Agency) and other partners we propose to develop this technical collaboration further during 2012.

Engaging with the wider Scottish Government, we have contributed to the Scottish Advisory and Implementation Forum for Flooding (SAIFF) and flooding consultation.

On Climate Change, we have continued to develop our analysis and partnership working around the transport proposals contained in the Report on Policies and Proposals (RPP). We have also sponsored associated behaviour change and technology initiatives, including various projects to be supported by the new Future Transport Fund. In support of sustainability we have:

Our provisional out-turn (unaudited) is within 2% of our budget' a clear indication of the rigorous control we exercise over the projects we deliver and of the priority we give to securing best value from the funds that we control.

1 The full audited accounts will be available when published at www.transportscotland.gov.uk