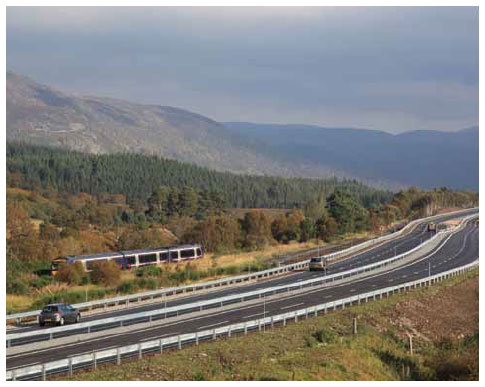 Dualling on the A9
(© Crown copyright) 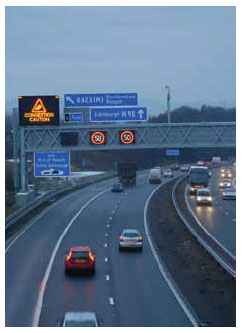 In June 2012 Ministers unveiled the programme for the £3 billion dualling of the A9 between Perth and Inverness with the first section expected to be shovel ready within the life of this Parliament.

We welcomed the unanimous Supreme Court ruling in October 2012 that allowed the Aberdeen Western Peripheral Route (AWPR) to finally move forward to the procurement and construction phases of the project. Ground investigation and advance preparatory work started on the ground almost immediately. In January 2013 an Industry day was attended by over 60 UK and European construction organisations interested in bidding for the combined AWPR/Balmedie-Tipperty Non-Profit Distribution (NPD) contract. When complete, the combined projects will provide a significant boost to the economy of the north east, creating over 14,000 jobs, as well as environmental and road safety benefits.

The Forth Replacement Crossing Project saw the Intelligent Transport System (ITS) come into operation in December 2012, creating a dedicated bus lane and variable speed limits which will be used during periods of congestion to smooth traffic flow, cut jams and make journey times more reliable. Over 7,600 unique suggestions were received for naming the new bridge with the winning name to be chosen in summer 2013.

The £2.2 million replacement of the Chartershall Bridge across the M9 that links several local communities in the Stirling area was completed on time and to budget. The original bridge was extensively damaged by a number of bridge strikes over a period of years and was beyond repair. The works were completed with just three overnight closures of the M9 and the new bridge opened to traffic in November 2012.

The £13.2 million contract for A9 Kessock Bridge Resurfacing and Barrier Replacement was awarded. These essential repair works involve replacing the original 31 year old surfacing and repairing defects to the steel deck. The works include state of the art surfacing materials to provide a more durable and long lasting surfacing. Phase 1 started in February 2013.

Services commenced on 1 April 2013 under two new contracts that will ensure Scotland's trunk road network continues to be efficiently managed. Under Transport Scotland's 4th Generation (4G) contracts BEAR Scotland and Scotland TranServ have taken on responsibility for provision of maintenance services for the north west and south west units respectively. These contracts will further improve the delivery of trunk road maintenance operations in Scotland, including enhanced winter maintenance and improved journey information. Procurement is also now underway for the east contracts which will commence service on 1 April 2014. 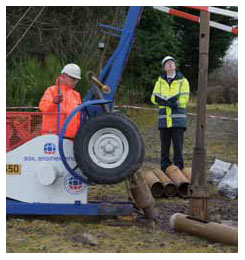 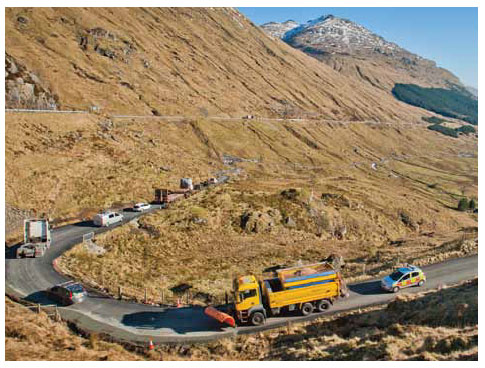 Following closures of the A83 over recent years due to landslides at the Rest and Be Thankful, an emergency diversion route through the Glen Croe valley in Argyll was constructed. This work provides an alternative route should the A83 be closed at the Rest and Be Thankful due to a landslide. The existing 4.2 kilometre single track road was improved to allow the route to be used by all classes of trunk road traffic. This offline work was carried out while further landslide mitigation measures were undertaken above the A83 trunk road itself.

The National Roads Maintenance Review explored how we could work more closely with local authorities and what could be learned from international road maintenance practices. The review concluded in July 2012 and implementation of the 30 initiatives identified has begun across all of Scotland's 33 roads authorities.

During the year other significant milestones include: