This section is also available in pdf format (520k)

At the concept design stage a plane-frame analysis model of a bridge incorporating a typical tower and typical box girder deck was established to illustrate this effect and serve as a means for a parametric study of ways in which the central tower can be stabilised.

The flexural moment due to live load at the base of tower is also increased approximately threefold.

The reduction in vertical stiffness is associated with a reduction in the vertical frequency of vibration. This has potential implications for aerodynamic behaviour since a more flexible structure is more susceptible to aerodynamic instability.

The problem of a double main span cable stay bridge is well recognised and the proposal made during the FRCS study was to adopt very rigid pyramid type towers with large foundations in order to provide a central tower which is stiff in its own right.

Such a tower type has been successfully adopted on Rion-Antirion bridge with 560 m spans as illustrated below. However, the resulting structure is visually imposing which is unlikely to be appropriate for this site where particular attention must be paid to not over-dominate the existing bridges. The foundation costs may also be increased.

Another example of using a triangulated tower to stabilise a multi-span cable stay system is the Maracaibo Bridge with 235 m spans.

An alternative means has been previously adopted on the Ting Kau Bridge with 448 m and 475 m main spans. Stabilising cables were used which tied the central tower back to the deck/tower junction of the flanking towers. The solution is not particularly aesthetically pleasing due to the visual onfusion between the cable fans and the tie back cables with their pronounced visible sag.

There are likely to be some technical difficulties with extending this solution to a 650m main span. The stay cables required would be approximately 20% longer than the longest stay cables ever produced in the world. The visible sag would be significantly increased with the longer stay cables and the effectiveness of the system would be reduced as the stiffness of long cables is greatly reduced due to their sag. The tensions in the stabilising cables would be increased and may be difficult to equilibrate through the deck. It is therefore not recommended.

The Millau Viaduct provides a very elegant example of a multi-span cable stay bridge where the central towers have been stabilised by a combination of stiffness in the deck and tower. The towers are also slightly triangulated with a longitudinal dimension of 15.5 m at deck level which gives reasonable proportions. The deck is 4.2 m deep spanning 342 m, a span to depth ratio of 80 which would correspond to a structural depth of 8.1 m for a 650 m span. Additionally, the deck has a moment connection to the towers which further increases its flexural stiffness. 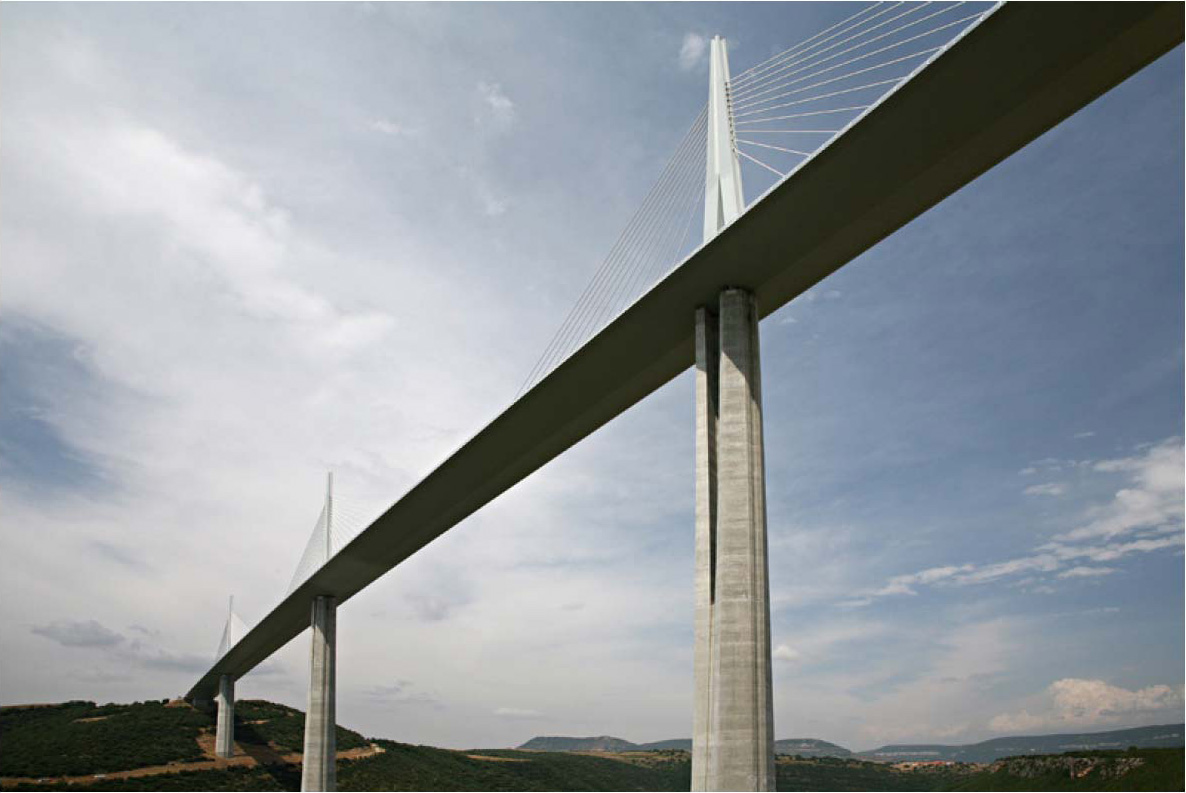 One final solution to be considered is to extend the stay cable fans so that they cross in the centre of each of the main spans. Although this solution has not been adopted on any major cable stay bridges to date it has been proposed as a viable solution by Professor Niels Gimsing in Cable Supported Bridges:Concept and Design which also refers to previous studies carried out by others. Parametric studies to investigate this alternative were carried out at the concept design stage to validate it as a practical and efficient means to stabilise the tower.

Two alternatives are recommended for further consideration and have been investigated in detail to confirm their structural viability for this project.