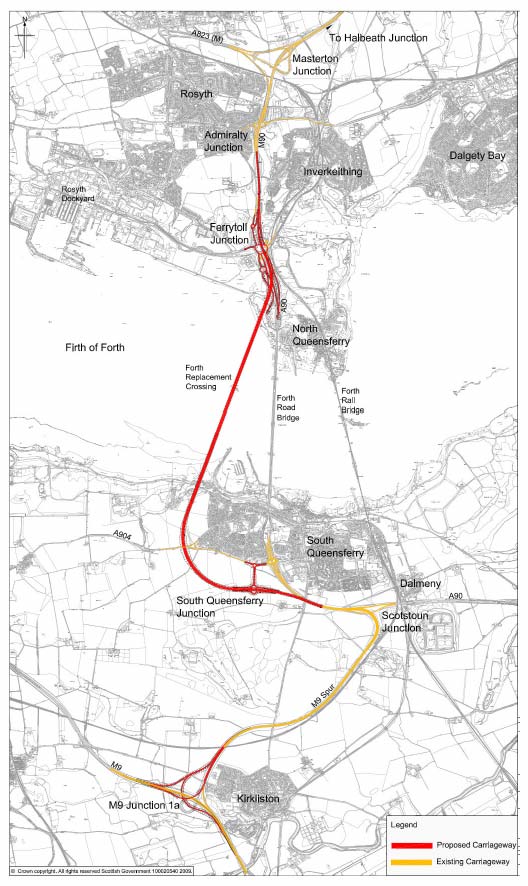 Following the announcement on 19 December 2007, the Jacobs Arup Joint Venture was appointed in January 2008 to work as a development partner with Transport Scotland to take the project forward.

Nine mainline route corridor options for the connecting roads to the Forth Replacement Crossing were identified: three in the Northern Study Area and six in the Southern Study Area.

An initial assessment reduced the number of options to three in each study area on the basis of environmental impact, cost, geotechnical issues associated with mine workings and economic/ transportation performance. Following this sifting, the remaining route corridors were further assessed in relation to engineering, environmental, transportation and cost considerations in greater detail. 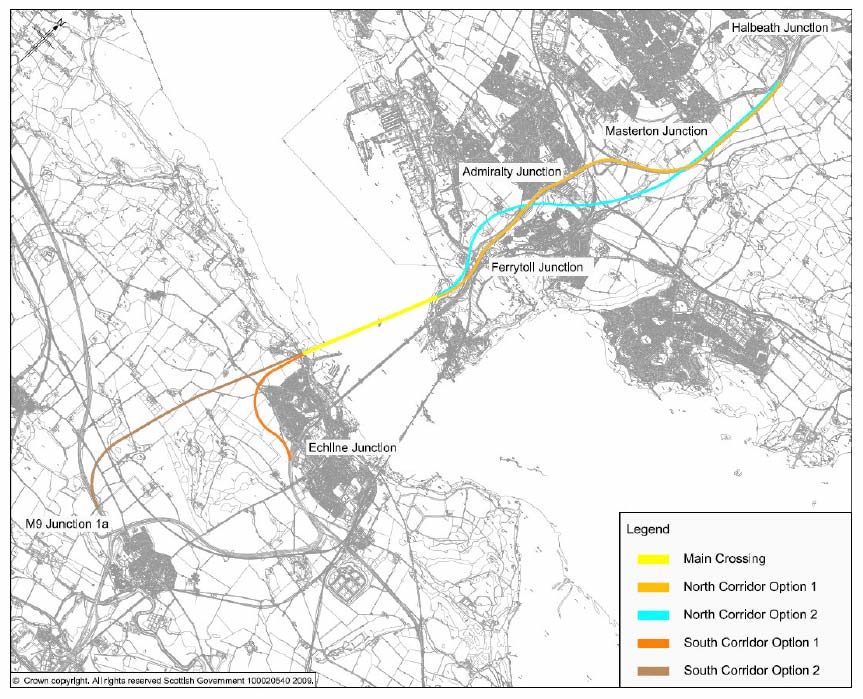 The shortlisted corridor options were developed further and assessed in relation to the scheme objectives and the engineering, environmental, sustainability, traffic and economic advantages/disadvantages associated with each.

Following completion of the assessment, a sensitivity check was undertaken on a further option, South Corridor Option 4B, a combination option that was defined at the Forth Replacement Crossing Route Corridor Workshop held with Transport Scotland on 25 June 2008. Details of this option are provided in the DMRB Stage 2 Corridor Report (see bibliography reference 3). The option was discounted on the grounds of its greater environmental impact of the infrastructure and its higher cost.

A short list of design concepts was developed at a workshop in February 2008 to provide the functionality as listed below and illustrated in Figure 1.3:

Figure 1.3: Forth Replacement Crossing Bridge Cross Section
(No utilisation of Forth Road Bridge)

Bridge options were developed to carry the multi-modal public transport corridor in the central area of the bridge (as illustrated in Figure 1.3 above), or in the lower level of a double deck structure. Given the very high cost of this provision for multi-modal public transport, a decision on the preferred bridge option was deferred pending the outcome of further investigations on the suitability of the Forth Road Bridge to take part of the overall crossing traffic.

1.5 Forth Road Bridge Feasibility of Multi-modal Corridor (August to October 2008)

A more positive prognosis for the Forth Road Bridge emerged during 2008. The second internal cable inspection carried out by FETA in early 2008 indicated that cable deterioration was not as rapid as had been feared. The technical feasibility of replacing the cables was also confirmed by a report published early in the year by FETA, although disruption to users and the consequential adverse impacts to business and the economy was such that it was not considered practical in the absence of a replacement bridge. Accordingly, a technical assessment of the capability of the Forth Road Bridge to work alongside the Forth Replacement Crossing was commissioned. With the new bridge being designed to carry general traffic and all heavy goods vehicles, the technical assessment of the Forth Road Bridge considered a range of options for rail based light rapid transit public transport together with footway loading and reduced highway loadings. All options were assessed to be geometrically feasible in that they could be accommodated within the available width of the bridge. All but one of the options reduced the load on the main cables. Modifications to the movement joints on the bridge would be required but could be provided within the parameters required for a rail based tram.

All of the options were assessed as having positive potential. The load reduction would mitigate the loss of cable strength that had already occurred and extend the period before cable replacement or augmentation became necessary. If the current dehumidification scheme being undertaken by FETA is a success, this work could be deferred indefinitely.

A 3 mono-tower cable stay bridge with a single box girder deck was recommended as the preferred option for the Forth Replacement Crossing.

Options for optimising the scheme definition were considered, having regard to the outcome of the Stage 2 Corridor Report and the assessment of the potential use for the Forth Road Bridge. The key considerations were that:

Analysis indicates that, for the majority of the time, the existing bridge and road network operate without congestion. Peak period congestion is largely due to the close junction spacing along the A90/M90 corridor and driver reaction to that. Much of the congestion and queuing which is observed during peak periods at present is due to the interaction of traffic joining busy traffic on the main carriageway at closely spaced junctions. It is proposed that this is addressed by the use of Intelligent Transport Systems with local junction improvements (see Figure 1.7).

Figure 1.7: Use of Intelligent Transport Systems on the M42 in England (photograph courtesy of Highways Agency) 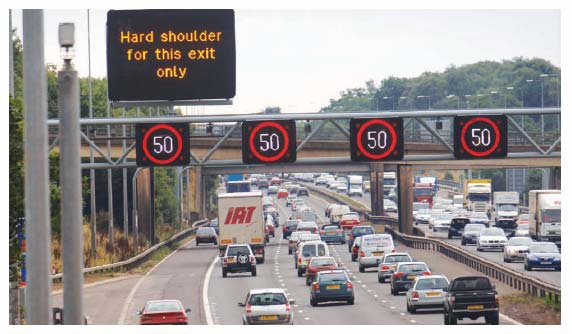 The potential adverse environmental impacts for the Managed Crossing Scheme are less than those identified for the Full Corridor Scheme.

In terms of resource use, preliminary calculations have been undertaken to provide a high level comparison of the embodied carbon of materials associated with the two scheme alternatives. The results show that the Full Corridor Scheme, which would have more roadworks, earthworks and bridge deck compared to the Managed Crossing Scheme would require approximately102,000 tonnes more embodied carbon than the Managed Crossing Scheme.

Table 1.1 sets out the capital cost estimates for the Full Corridor Scheme (as at July 2008 and as modified in October 2008) and the Managed Crossing Scheme, all at Q4 2006 prices. Outturn prices allowing for the cost of capital and an estimated inflation range are also detailed below.

In additional to the capital costs, operations and maintenance (O&M) cost profiles detailing the long term operating costs and lifecycle refurbishment costs have been estimated.

The assumption is made in the Full Corridor Scheme that the Forth Road Bridge, a listed structure, would be managed on a care and maintenance basis although not used for traffic. Its usage under the Managed Crossing Scheme as a public transport corridor is assessed to require a higher level of operation and maintenance cost input.

The economic assessment considers the monetised benefits of the options for the Forth Replacement Crossing and compares these benefits to the costs associated with its construction and maintenance in accordance with the requirements of the Scottish Transport Appraisal Guidance (STAG). In this exercise, all costs are rebased to 2002 prices and are discounted to 2002 in line with the practice for transport schemes. The maintenance costs associated with retaining the Forth Road Bridge are included in this assessment.

Table 1.3 provides a comparison of the Benefit to Cost Ratio of the Full Corridor Scheme and the Managed Crossing Scheme.

In addition to the above, the wider economic impact of closure or restricted use of the Forth Road Bridge, without a replacement crossing, on the local economies of Fife and the Lothians and the national economy of Scotland, would be very significant.

FETA have assessed that cable replacement would be the preferred method of restoring the strength of the suspension cables and that it would be possible to undertake. However, if carried out without a replacement bridge to carry traffic during the period of the works, the disruption caused would reduce business turnover by £1,320 million and reduce business turnover by £1,085 million in Scotland as a whole with an associated loss of jobs of 3,200, many of which would be permanent.