The design of the Forth Replacement Crossing is inexorably linked with the future use (if any) of the Forth Road Bridge. The Forth Road Bridge is a Grade A listed structure, opened to traffic in 1964. It has a main span of 1006 metres and an overall length of 2500 metres including approach viaducts. On opening, the Forth Road Bridge was the longest suspension bridge outside of the USA and the fourth longest in the world. The bridge is maintained and operated by the Forth Estuary Transport Authority (FETA).

Major maintenance is an on-going requirement for all large suspension bridges. In the case of the Forth Road Bridge, this requirement has been exacerbated by the increases in traffic volume and the increased weight of heavy goods vehicles. In addition, the Forth Road Bridge is at relatively northern latitude and is subject to high winds blowing in from the west. Combined with the cold waters of the Firth, this leads to foggy weather during the spring and summer months with high relative humidity. The presence of salt water helps to contribute to highly corrosive conditions.

The most recent focus of concern in relation to the Forth Road Bridge being able to continue to provide an unrestricted crossing has been the condition of the main suspension cables upon which the stability of the bridge depends.

In 2004 and 2005, FETA undertook the first internal inspection of the main suspension cables, following draft guidelines as recommended by the American National Co-operative Highway Research Program Report 534 "Guidelines for Inspection and Strength Evaluation of Suspension Bridge Parallel Wire Cables". As there are no UK or European guidelines for such inspections the American guidelines are currently accepted as the industry standard.

FETA found that a significant number of cable wires had broken or were in an advanced state of corrosion. This led to the estimation that the cables had lost between 8% and 10% of their original strength. In addition, if the rate of cable deterioration was not reduced, it was predicted that restrictions to heavy goods vehicle traffic may be required from 2014 and closure to all vehicles from 2020.

In early 2008, FETA carried out a second internal cable inspection which included some areas of cable which had previously been inspected in 2004 and 2005. In July 2008, FETA reported that the cables were estimated to have lost 10% of their strength, which can be compared to the lower bound figure of 8% estimated from the 2004/2005 work. Whilst the previously predicted timescale for possible traffic restrictions remained valid, cable deterioration appeared to be tending towards the optimistic end of the range. Restrictions to HGV traffic now seem more likely to be required at some point between 2017 and 2021. FETA also reported that these were the predicted dates for restrictions if the cables continued to deteriorate without intervention; if dehumidification is successful then the date for traffic restrictions could be extended.

In February 2008, FETA reported on a study to investigate the feasibility of replacing or augmenting the cables, should this become necessary. It concluded that such measures would be possible but would not be realistically feasible if a replacement crossing was not available when carrying out such works, as the traffic disruption and economic impact would be severe.

FETA is currently installing dehumidification equipment to the cables. This involves pumping dry air through the voids within the cable, having first applied an air-tight neoprene wrapping. It is hoped that this process will remove moisture from the cables and prevent or reduce further deterioration. The success of this method can only be determined once the cables have dried out and it will therefore be necessary to wait until late 2011/early 2012 until further evaluation can take place.

In addition to the cable problems, the Forth Road Bridge has a number of identified on-going and significant maintenance issues, some of which are typical for a bridge of this type and age. Much of the work has or will have a significant impact on users and the wider economy.

Despite the on-going maintenance and operational issues, the improved prognosis for the cables and the technical feasibility of replacing or augmenting them if necessary has increased the attractiveness of using the Forth Road Bridge in the Forth Replacement Crossing strategy. This possibility was acknowledged by the Cabinet Secretary for Finance and Sustainable Growth. On the 15 January 2008, he reported to the Scottish Parliament Transport, Infrastructure and Climate Change Committee (TICC) that:

"If we find that the existing bridge can be refurbished and there is a continuing use for it we will proceed to determine what that future use could be. There are many things that the bridge could be used for, particularly in encouraging significant modal shift, if it can be refurbished".

5.2 The Development of the Main Crossing Design (January to August 2008)

The initial design development work for the replacement crossing produced a short list of concepts at a team workshop in February 2008 to provide the functionality as listed below and illustrated in Figure 5.1:

Figure 5.1: Forth Replacement Crossing: Bridge Cross Section
(No utilisation of Forth Road Bridge)

Bridge options were developed to carry the multi-modal public transport corridor in the central area of the bridge (as illustrated in Figure 5.1 above), or in the lower level of a double deck structure. For further details on this work refer to the ‘Forth Replacement Crossing, Main Crossing (Bridge) Scheme Assessment Report, Development of Options’. Given the very high cost of this provision for multi-modal public transport, a decision on the preferred bridge option was deferred pending the outcome of further investigations on the suitability of the Forth Road Bridge to take part of the overall crossing traffic.

5.3 Forth Road Bridge Feasibility of Multi-modal Corridor (August to October 2008)

The project team monitored the work undertaken by FETA during 2008 which reported a more positive prognosis for the Forth Road Bridge than the previously reported scenario. Encouraged by the improved prognosis, an assessment was begun to assess the viability of the existing structure being retained and utilised as part of the Forth Replacement Crossing Project. In particular, the FETA reports increased the attractiveness of including the use of the existing bridge to realise the following advantages:

The feasibility of possible arrangements to accommodate pedestrian and cycle traffic, light road traffic and/or public transport, and any future light rail or tram traffic were reviewed and reported in the Forth Road Bridge – Feasibility of Multi-modal Corridor Report. The study assessed the capability of the existing bridge to carry a range of options for tram/light rail based public transport together with footway loading and reduced highway loadings. All options were assessed to be geometrically feasible, and all but one reduced the load on the main cables. Modifications to the movement joints on the bridge, in particular at the main towers, would be required. In conclusion, all of the options were assessed to have positive potential. The load reduction would mitigate the loss of cable strength that had already occurred and extend the period before cable replacement or augmentation became necessary. If the current dehumidification scheme is a success, this work could be deferred indefinitely.

An independent technical audit of Transport Scotland’s work was undertaken by Faber Maunsell - Forth Road Bridge Audit of Future Multi-Modal Use: Summary Report: October 2008. This audit concurred with the above report’s findings.

On the basis that it was concluded that the Forth Road Bridge could be capable of adaptation for multi-modal use, including future tram/light rail use, it was determined that this would be taken forward as a planning assumption. Figure 5.2 illustrates the Forth Road Bridge (FRB) as a public transport corridor with provision for pedestrians and cyclists. Figure 5.3 shows a possible LRT layout.

5.4 The D2M Forth Replacement Crossing (October to November 2008)

Following a review of the necessary facilities which are required for the Forth Replacement Crossing, it was concluded that relocation of the multi-modal and the pedestrian and cycle facility onto the Forth Road Bridge would enable a narrower section of the replacement bridge to be adopted comprising:

Following further analysis and review, the recommended option is a single deck twin corridor combined with mono-towers. This work is reported in ‘Forth Replacement Crossing, Main Crossing (Bridge) Scheme Assessment Report, Development of D2M Alternatives’. An analysis of the various options for the D2M bridge is summarised in Table 5.1.

The following factors contributed to this recommendation: 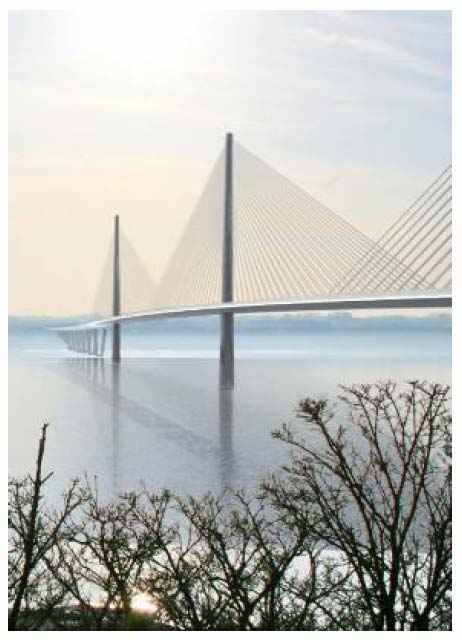 The recommended option and the basis for that recommendation has been the subject of consultation with Architecture + Design Scotland (ADS), who are supportive of the proposed bridge option in preference to other alternatives.