13.1. For this evaluation, it was decided that the most effective way to determine change in travel behaviour since the project was implemented was to ask rail passengers using services on the line directly to build up an accurate picture of behaviour 'before' and 'after'.

13.2. An online survey was developed as this was judged to be the most effective method of gathering the necessary information considering the geographical spread of respondents (see figure 1).

13.3. SYSTRA originally proposed to advertise the survey using a combination of flyering and posters at stations that received new services and service improvements, advertisements in the local press, and social media (for example through Transport Scotland, Network Rail and First ScotRail's Twitter and Facebook feeds).

13.4. However, due to concerns from Transport Scotland that the blanket nature of social media would not allow users of the Larkhall-Milngavie service to be specifically targeted, it was decided not to use this approach. In addition, it was not possible to use posters as a means of advertising the survey as First ScotRail were not able to facilitate this.

13.5. Awareness of the survey was therefore generated through a targeted approach. An initial week-long flyering exercise was undertaken at key stations (the four new stations[45] on the line plus Glasgow Queen Street and Glasgow Central) across the network. This was followed by placing an advert in the local press[46] for 2 weeks. The initial promotion resulted in a total of 116 survey responses, 35% of the target sample of 336[47].

13.6. A further week-long flyering exercise[48] was subsequently undertaken to further boost responses, but with limited effect. Following all promotion activity, a total of 164 survey responses were received, representing half of the target sample.

13.8. To gather the information required to evaluate the scheme against the objectives and STAG criteria, the survey focused on the issues listed below. The following information was provided for up to three of the respondents most frequent journeys:

13.10. The main aim of the survey questions was therefore to build up an accurate picture of 'before' and 'after' travel behaviour.

Sample Size and Limitations of Analysis

13.11. A total of 164 survey responses were received over the six-week online survey period and information was provided for 309 journeys[49].

13.13. Based on this sample size, the margin of error is ±7.65% with a confidence interval of 95% and on the assumption of maximum uncertainty. This should be taken into account when considering the results presented in subsequent sections.

13.14. The distribution of the respondents' home postcodes (n = 151[50]) is shown in the map in Figure 31 and summarised in Table 41. The distribution of respondents reflects the targeting of key stations, with over 60% living in Larkhall or Hamilton. The remainder were predominantly from the Greater Glasgow area, particularly the Kelvindale and Bearsden areas. 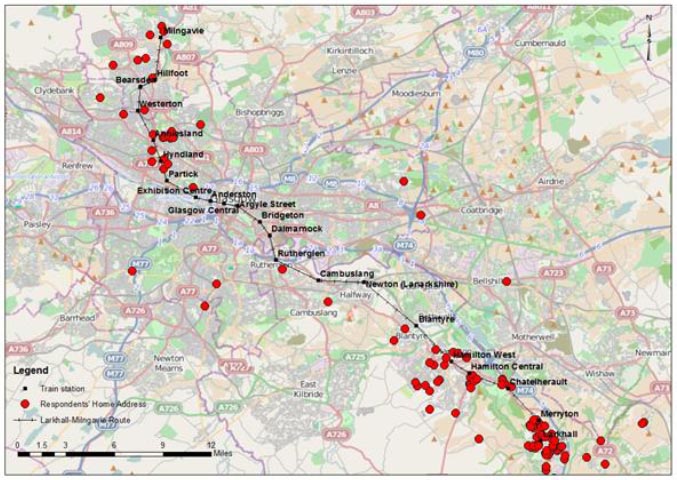 13.15. The age and gender distribution of the respondents is summarised in Table 42. This indicates the survey sample was representative of gender but that the under 45s were under-represented and the over 45s over-represented when compared to the gender and age profile of rail passengers at a national (GB) level.

13.16. The survey responses were predominantly analysed to address the extent to which project objectives (referenced in section 2.12) have been met. This analysis is presented in Chapter 5.

13.17. Where applicable, the analysis focusses on the four key scheme components of the Larkhall – Milngavie railway project ( Table 43). Where analysis is by scheme, respondents have been allocated to each scheme according to their home station i.e. the nearest to their home address (which for nearly all respondents is the station that they use the most). This covers 145 respondents (96% of the total sample).

13.18. Table 44 compares the number of scaled annual journeys (as discussed in section 13.12), against the number of station entries in 2012/13 from the ORR by scheme. This shows that the sample size was highest for the Hamilton – Larkhall reopening scheme and reflects the targeting of respondents. Clearly the larger the sample size %, the smaller the margin of error. Results relating to schemes 2 to 4 should therefore be treated with more caution owing to their low sample sizes.