1) For the purposes of this Specification, modules where one side of the module is generally greater than 300mm, are expected not to rely on infill sand between the vertical faces of the modules. Rather, the gaps between these modules are normally filled, or pointed, with a cement: sand mortar.

2) Modules with sides generally up to and including 300mm rely on jointing sand between the vertical faces of the modules, normally affected through vibration methods, with jointing sand subsequently brushed into joints upon completion. It is essential that the jointing sand is kiln dried and free flowing. Sharp sand or building sand are not normally deemed to meet these requirements, although in some situations the use of sharp sand has been found to provide increased durability.

3) It should be noted that there may be a need to revisit sites to top up jointing sand following subsequent trafficking.

4) It should also be noted that there may be a need for the application of a sealant on sites subject to mechanical/vacuum sweeping.

1) Figures NGA12.1 to NGA12.3 provide guidance as to acceptable treatment of cement or concrete infills between the nearest practical module and the immediately adjacent fixed feature or boundary feature, as described in Appendix A12. Figures NGA12.1 and NGA12.2 show fillets in modules of one side greater than 300mm, whilst Figure NGA12.3 shows fillets in modules with sides up to and including 300mm.

1) Figures NGA12.4 to NGA12.6 provide guidance as to acceptable treatment of modular patterns in localised reinstatements immediately adjacent to fixed features or boundary features. The principle of an acceptable loss of local pattern is indicated, together with the use of larger cut and/or shaped pavers, both leading to an improved aesthetic and structural arrangement of the modules within the reinstatement. 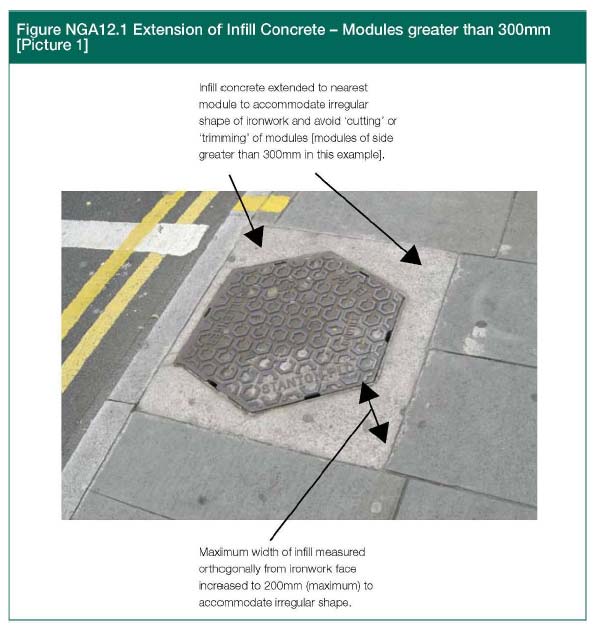 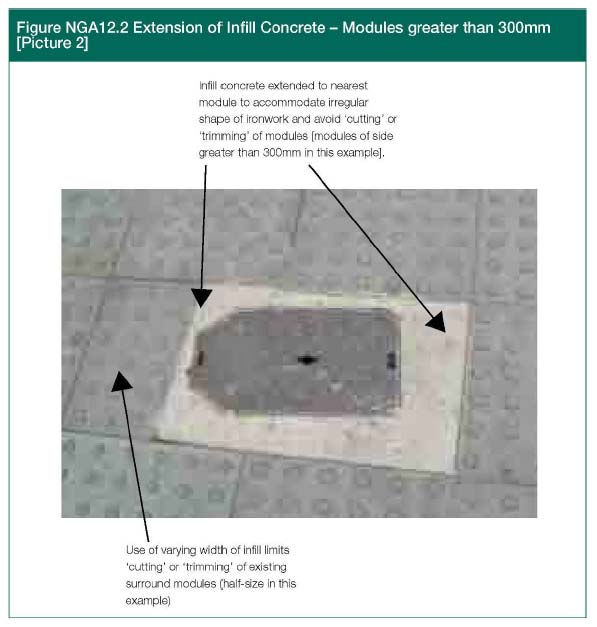 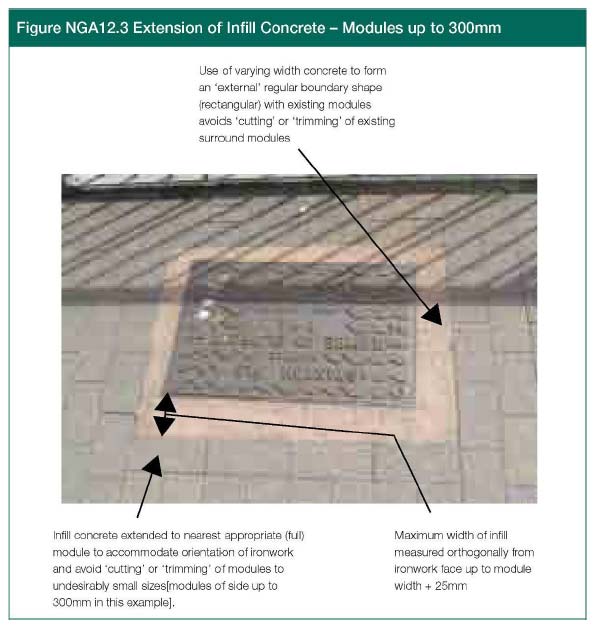 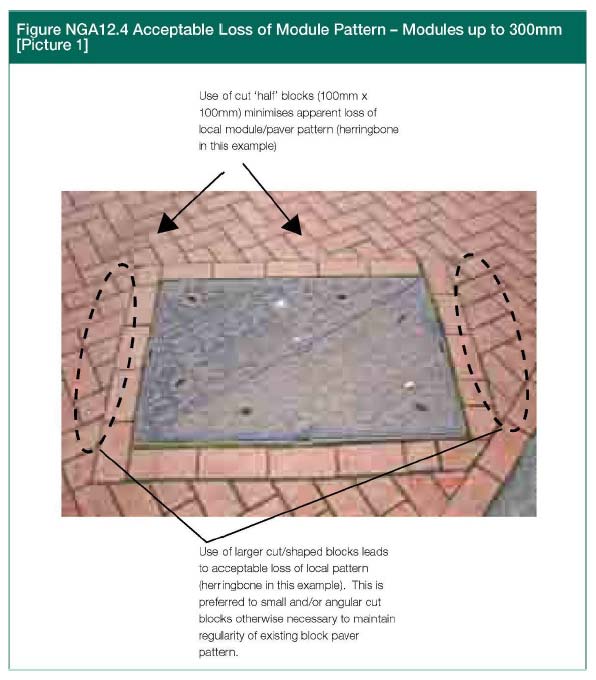 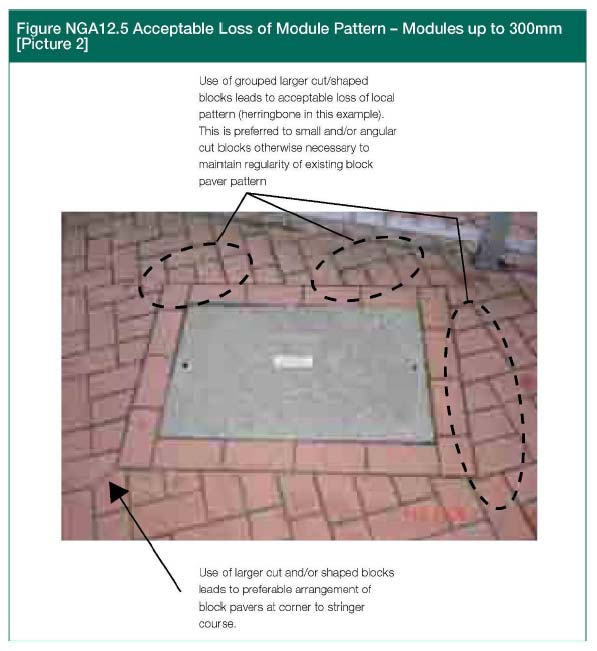 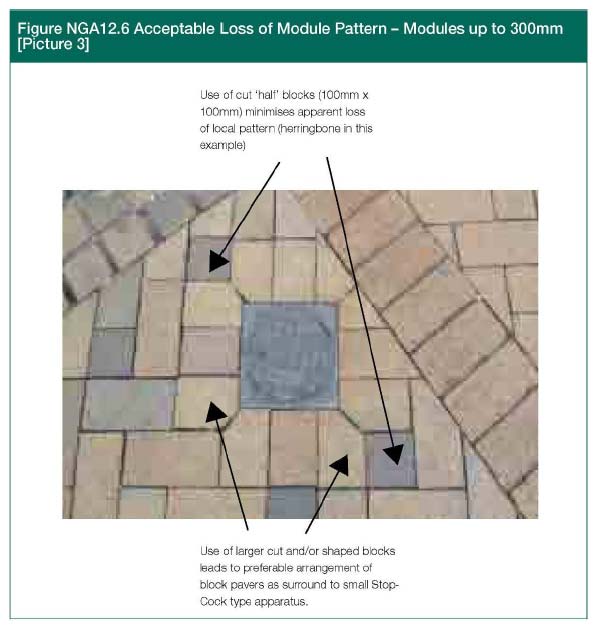 1) It is in both Authorities and Undertakers interest to achieve a reinstatement that matches the existing modules as closely as possible. Authorities are recommended to retain stocks of modules used within their areas to enable them to provide replacements when modules are required due to breakage at some time prior to the Undertaker's works. The Authority may provide such suitable replacements to the Undertaker, free of charge.

2) Where no stocks of suitable replacements are available, Authorities should assist Undertakers in locating a source of suitable replacement modules. This is becoming especially prevalent with the proliferation of modules sourced from around the world. When obtaining a supply from the original source is uneconomic, Authorities should accept similar modules from an alternate source of supply.

1) Within Limits of Undertaker's Works - Following notification from the Undertaker, a joint inspection shall be arranged prior to the commencement of all standard or major works to agree the extent of damaged, settled or deformed surfacing within the limits of the works. Where the Authority does not provide suitable replacements to the Undertaker in accordance with paragraph NGA 12.4 (1) above, it may contribute to the Undertaker the sum notified by the Undertaker as the cost of replacing the same.

2) Outside Limits of Undertaker's Works - Following notification from the Undertaker, a joint inspection shall be arranged to agree the need and extent of any remedial measures outside of the limits of the Undertaker's works. An apportionment of the additional costs, based on the relative areas of permanent reinstatement, shall be agreed. In the event of an Authority failing to agree to meet a proportion of the costs of reinstating modules, the Undertaker shall proceed in accordance with paragraph A12.4 (1).

3) Prior joint inspections will usually be impractical for minor and immediate works. However, such works are usually small individual excavations and a proportion of such works will be inspected by the Authority, within the sample inspection regime. On completion of all minor and immediate works, the Undertaker shall be free, at its discretion subject to paragraphs NGA 12.4 and A12.4 (1), to recover all reasonable costs from the Authority, according to the procedure illustrated in Figure NGA 12.7.