The site-specific inspection of those parts of the trunk road network identified as being subject to debris flow hazards is a necessary element within the process of hazard assessment. These inspections have three main purposes:

There are essentially three stages to the site-specific assessment process (Section 6.2):

The management of the trunk road network in Scotland is undertaken on the basis of four units run by Operating Companies employed by Transport Scotland, as follows:

In the first instance it was anticipated that in the main it would be Priority 1 sites, which exclusively occur in the North-West Unit, that would be assessed initially during the summer of 2007. However, the lack of availability of aerial photography in Scotland meant that only around 44% of the 135km of Priority 1 lengths identified would be able to be examined. Nonetheless, broadening the assessment out to include the 66% of Priority 2 lengths for which aerial photography was available (including those lengths in the South-West and North-East Units) raised the total lengths to be examined to 161km (Tables B.7 to B.11). These 2007 inspections form part of a process which will be ongoing in successive years.

The site-specific assessments carried out formed the end point of a staged hazard assessment process for a given route that began with the GIS-based assessment. Interpretation of this data using Ordnance Survey 1:50,000 mapping and low resolution aerial photography meant that many of the factors that would inform an assessment of this nature were already implicit.

The site-specific assessments were therefore to supplement and validate the initial process by utilising high resolution aerial photography and initial site inspections from road level. Where appropriate more detailed inspection of any given site was subsequently conducted and involved excursions from road level to the adjacent hillsides.

The work centred on various locations across the Scottish trunk road network, predominantly in the north-west sector (see Tables B.7 and B.8). The site evaluation element of the work involved inspecting adjacent hillsides up to, potentially, two to three kilometres from the trunk road itself; such inspections and the maximum distance of the inspection from the road were dependent upon the needs of the site.

The primary evaluation of hazards was achieved through the GIS-based assessment. It was then supplemented by site-specific studies involving the use of aerial photography and site visits. The intention of this latter exercise was thus to validate and make relatively small adjustments to the scores derived from the GIS-based exercise.

Factors such as lithology and water condition were not able to be readily assessed, in most cases, from the type of imagery available (see Section 6.2.1). These factors did, however, form a key part of the GIS-based assessment, which has been a major contributor to deciding on the areas to be subject to site-specific inspections. Notwithstanding this however, the site inspection process did provide an essential opportunity to validate assessments made in regard to at least some of these factors on the ground.

The site inspection process was reported primarily through the completion of a standardised Microsoft Excel® spreadsheet at each of the three main stages of the process (Table 6.1). In addition, a short report (circa. One or two pages) was prepared for each site with photographs to illustrate specific features and decisions made on scoring.

As noted above the site inspection process involved three main stages as described below.

1. Desk study: These activities were intended to be carried out prior to embarking upon on-site activities.

Key desk study activities included the assembly and printing out of relevant information including OS Map imagery (1:50,000 and/or 1:25,000), high resolution aerial photography, and the GIS-based assessment.

Attention was then focused on the high resolution aerial photography in order to obtain an overview of the area and then to enable a virtual inspection of particular features. The printed imagery was marked-up and notes made to enable the site-specific spreadsheet (Table 6.1) to be preliminarily completed.

2. Preliminary Site Inspection: This was intended to allow a provisional, but necessarily limited, view of the site setting. This was achieved by a drive-through of the length of road in question, with the inspector as a passenger, stopping as necessary to observe and note features from road level. Photographs were taken to illustrate features and decisions made.

From the notes made further entries to the site-specific spreadsheets were made (Table 6.1) as appropriate and an evaluation was made as to whether further excursion up the hillside was required. This essentially involved answering the questions:

"Will the information obtained make a substantive improvement to the evaluation?"

"If so, will a more detailed site assessment (as in (3) below) provide adequate answers for the purposes of the spreadsheet?"

If the answer to both questions (above) was "yes" then proceeding to further detailed site inspection was deemed to be required, otherwise not. In actuality the decision to proceed with further inspections was made in all cases. A number of factors may have, however, informed such decisions. It was appreciated that the inspectors were not, and nor could they have been, party to the complete assessment process. The information available to them, and their experience of the complete process, may thus have proved to be insufficient to allow them to decide, with confidence, not to undertake further inspections.

3. Detailed site inspection: This process essentially completed the hazard assessment process by relating the information considered thus far (which was either image/data-based or a physical view from a remote location) to the ground itself. In practice the detailed site inspection comprised a walkover from road level and excursions up slope (or down where necessary) as required, but typically every 0.5km to 1.0km. Further entries were then made to the site-specific spreadsheet (Table 6.1) and the scores obtained at this stage taken as final scores. Photographs were taken to illustrate both the features encountered on site and the decisions made, as appropriate.

The orthographic digital aerial photographs were supplied as 25cm resolution JPEG images with both JGW and TAB files for the purposes of geo-referencing by Getmapping.

A typical example of such an image for Glen Ogle (south-west corner NN 570 260, or 2570 7260 using the eight-digit referencing system applied to the filenames of the images supplied) is illustrated in Figure 6.1. The original image was 33.87cm square at a resolution of 300ppi (300 pixels per inch or 118.11 pixels per centimetre) and has been scaled for use in this report. Both the north and south debris flows at Glen Ogle are annotated on the image, but note that the source areas appear in the images of adjacent areas to the north and east (see Figure 6.2).

The aerial photograph in Figure 6.1 and other adjacent images have been digitally ‘stitched’ together to give more extensive coverage in Glen Ogle. Key features are marked on the image as described in the figure heading. Of particular interest, in addition to the different elements of the debris flows are the subsequent carriageway repairs and the rockfalls/rock slides that cross the old railway line on the west side of the glen. The railway line was closed in 1965 when the line, already scheduled for closure, was blocked by one or more major landslides. It is believed that these may have been one or both of the rock-based landslides illustrated in Figure 6.2.

Figure 6.1 – Aerial photograph showing the northerly (N) and southerly (S) debris flows that occurred in Glen Ogle in August 2004 with key features marked. The photograph represents a 1km by 1km square; north is to the top. 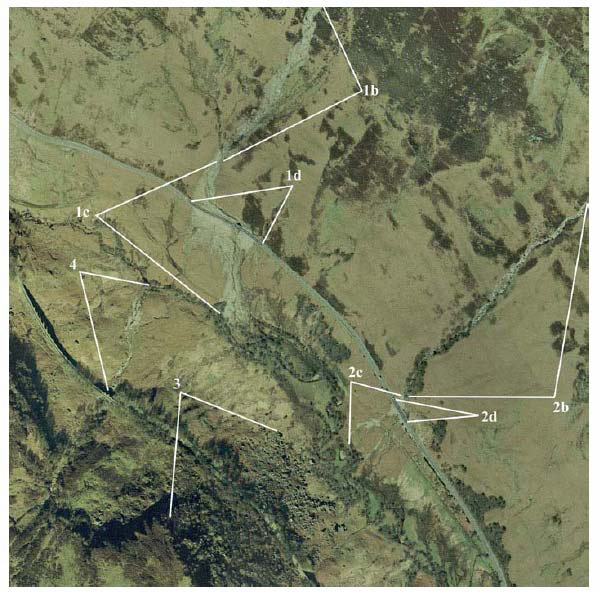 Figure 6.2 – Aerial photograph showing a large part of Glen Ogle. The image was made by stitching 12 adjacent 1km by 1km photographs, including Figure 6.1, in a 4km (vertical) by 3km (horizontal) grid; north is to the top and the marked features are as for Figure 6.1. 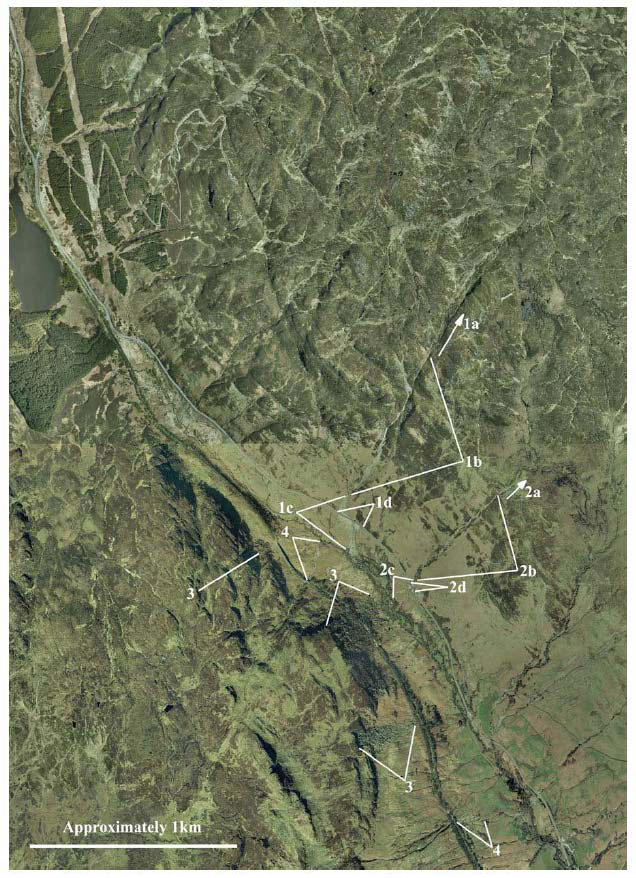 In addition, limits were placed upon the amount by which the scores could go up or down. This was intended to ensure that the maximum score was restricted in any instance to a nominal 100 also that lower ranked sites could not automatically jump to an inappropriately higher category (and vice versa).

The initial hazard scores based upon the interpretation of the GIS-based assessment, the allowable adjustments and the associated possible range of final score for each of Priority 1 to 4 are given in Table 6.2.

Summary results from the site-specific assessments are given in Table 6.3 and example score sheets and associated reports are given in Appendix C, along with a more detailed breakdown of the scores.

Table 6.3 shows that the average increase in the hazard score as a result of the site-specific inspections was around 13. In order to ensure that those Priority 1 and 2 sites that were not inspected due to a lack of aerial photography were not effectively downgraded when it came to determining what actions should be taken, an across-the-board increase of 10 was applied to the scores for the un-inspected Priority 1 and 2 sites; the final hazard scores are presented in Appendix D.