The landslides study was commissioned to assess debris flow hazards on the Scottish road network and address the risks resulting from these as they affect Transport Scotland’s road network and the road users. The risk to life and limb was identified at the outset of this project by Transport Scotland’s senior management as the primary concern with socio-economic impacts being secondary (but nonetheless important).

Risk is classically defined in terms of landslides (Cruden and Varnes, 1996; Culshaw, 2005) as follows:

In this work the result of this equation (risk) is described as Hazard Ranking, RH, as it is recognised that the work reported does not consider all aspects of risk.

The hazard is as determined in Section 6. The elements at risk, namely the road and the associated road users, are either present or not at a given plan location. The elements at risk may thus be represented by a binary switch that is set to unity in all cases considered (i.e. where a road and road users are present). The vulnerability equates to risk to life and limb of road users and the socio-economic impacts, including diversionary effects, of temporary closure due to landslides. The binary switch allows a simplification of Equation 7.1 and for the purposes of this study may be rewritten as:

where EX represents the vulnerability of road users to life and limb risks and the potential socio-economic impacts.

The approach taken herein mirrors that typically followed for landslide hazard and risk assessment, as described above. It builds upon the approach outlined by Winter et al. (2005a) in the precursor to this report and is not a modification of the approach proposed by Clayton (2001), as has been stated by Anon (2006a).

The exposure of life and limb may be represented, at a simple level, by the surrogate of traffic flow. It is accepted that sightlines and other factors that influence visibility of the road ahead could also be used to refine the exposure of life and limb (e.g. McMillan & Matheson, 1997). However, in this study two issues rendered this additional complication inappropriate: first, to a large extent traffic flows relate to the type of road alignment in place and thus to the quality of the sight lines; second, the extent of the route lengths considered meant that a simple and straightforward approach was, in this case, more suitable.

Similarly, the socio-economic aspects of exposure may be represented not only by the traffic flow and but also by the existence, length and quality of any diversion necessary.

As with the different elements that make up the GIS-based hazard assessment (Section 4), the different elements of exposure must also be added together in order to achieve an overall score. Relevant categories were determined and scores then assigned for both traffic flow and diversionary aspects of exposure for each site. The scores for these individual factors were then weighted to reflect their relative importance and then summed to produce the overall exposure score.

The traffic categories used by Transport Scotland reflect the traffic flows over the entire network. The lowest flow category comprises those roads with an Annual Average 2-way 24-hour Daily Flow (AADF) of less than 10,000 vehicles per day. It was apparent at the outset of the work to define the traffic flow scores that this lowest category would cover a large proportion of the vulnerable sites identified in Section 5. This would mean that the use of the standard traffic flow categories would not effectively differentiate between the various sites and a decision was therefore made to use alternative categories. These new categories and their associated exposure scores (EXT) were defined as follows:

For any given site, weightings were then applied to the two exposure scores. The two weighted scores were then added together to give a total score for exposure. The weightings applied reflect the paramount importance of reducing the exposure to risks related to life and limb of the travelling public, and for this reason the traffic score was weighted more heavily than the largely disruption-focused diversion score. It should however be noted that the traffic score does itself include significant elements that relate to the potential disruption to road users.

The score of the final exposure score is thus given by:

Accordingly, Equation (7.2) may thus be rewritten as follows:

The final exposure scores are detailed in Appendix D.1.

It could be argued that either the hazard or the exposure (and therefore hazard ranking) should be influenced by the length of the section in question in a very direct sense by, for example, taking the Elements at Risk part of Equation 7.1 to be the length of road. This type of approach is suited to risks such as that of a tanker over-turning on a straight road – that is, risks that are entirely uniform along the full length of the section (see also Section 5.2.2). However, there are a number of factors that count against this approach, and these are as follows:

1. The relation between length and the probability of event occurrence is not a constant. The hazards contained within a given section length are variable in terms of their spacing and magnitude and the profile of any hazard score along a given length is therefore also variable. It would therefore not be correct to proportion the exposure according to the length of the section in question.

2. Effects of length have already been accounted for appropriately in the process in which priorities were assigned to the lengths (see Section 5.2.2). Thus, hazard scores should be viewed as providing aggregate scores over the length of the identified hazard rather than average scores at any given point within the length.

3. The purpose of the work was also to rank hazards rather than to perform an all-encompassing risk assessment.

4. The hazards and hazard rankings are intended to apply to each likely point of potential incident on a route length and therefore it would be inappropriate to undertake a length-based approach.

5. A length-based approach does not lend itself readily to spatial assessments (such as those relating to debris flows) as opposed to purely linear hazards (such as that of a fuel tanker overturning).

In Section 3, Figure 3.1 identified site rankings in terms of Low, Medium, High and Very High Hazard Ranking. An explanation of these categorisations was given in the text. 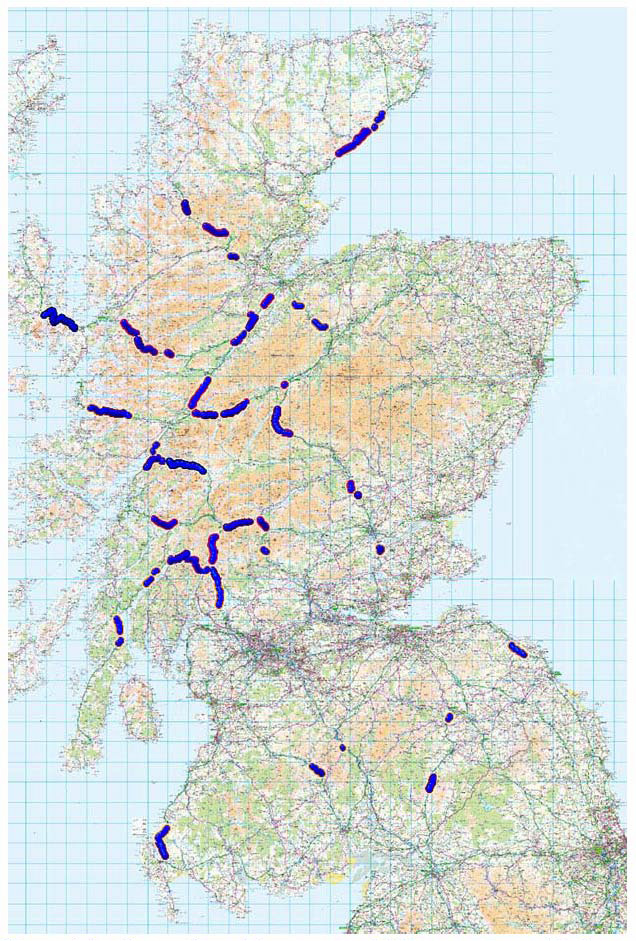 The cost of hazard reduction measures, beyond routine drainage maintenance and improvement measures, is such that embarking upon such work needs to be considered very carefully. Indeed, the costs need to be set within the context of the overall maintenance and construction budgets operated by Transport Scotland. Additionally, any intended work should be reviewed in terms of existing programme plans for significant upgrading and/or realignment of existing routes (see also Section 8.2).

Table 7.1 details those sites determined to be of High and Very High Hazard Ranking.

In Section 3, Figure 3.1 indicates a Monitoring and Feedback activity in the flowchart. An essential component of that activity is having in place an effective programme for re-inspection of slopes identified as being hazardous or potentially so. As an overall consideration, the GIS-based assessment should be re-visited in (say) 10 years to take account of:

This work would also require reinterpretation of the GIS-based assessment (either manually as reported here or automatically if technology, including processing power, allows).

In terms of re-inspection of the sites themselves, those with a hazard score of (say) 70 (i.e. Priority 2 sites with the 10 uplift added for site-specific inspection) and above, should also be subject to a reassessment exercise. This would go some way towards taking account of temporal changes to the volume and nature of material available for triggering debris flows.

The combination of revisiting the GIS-based assessment, interpretation and site-specific re-inspection after the interval suggested, should also ensure that the appreciation of debris flow hazard to the network remains soundly-based in future years.

Clearly debris flows are not the only hazards that may affect roads in Scotland and amongst the others are those presented by falls of geological material from rock slopes and cliffs alongside the network. Between 1994 and 1999 Transport Scotland (in a previous guise) initiated and operated a structured programme of rock slope risk assessment and management on the trunk road network (McMillan, 1995; McMillan & Matheson, 1997). The process involved the computation of a Hazard Index that then determined the actions required in terms of further inspections and more detailed surveys to determine Hazard Ratings.

The Hazard Index categories that were developed are as follows:

In recent years, a review of progress with both inspections and recommended remedial works was undertaken (Blair & McMillan, 2004). This review identified the sites at which urgent detailed inspections had been required to be undertaken as part of the Hazard Rating process. Whilst most of those had been, indeed, undertaken prior to the review, some outstanding inspections were identified, as follows:

The 2004 review is, of course, unable to detail how many of the sites flagged for detailed inspection have now been inspected.

Transport Scotland is currently assessing the future actions required to address those Hazard Rating surveys and re-inspections that remain to be carried out.