In this appendix a brief and selective review of the approach to the signing of landslide hazards in a road environment in both the United Kingdom.

Item 4 (Figure E.1a) indicates that the symbol may be reversed if appropriate and Item 5 that if the sign is not illuminated then it must be reflectorised.

A sub-plate may be added to the main sign in the UK to indicate the distance over which the hazard is extant. Item 4 (Figure E.1b) indicates the manner in which the distance may be expressed, while Item 5 indicated that illumination/reflectance should be the same as for the main sign.

In New Zealand ‘international’ graphics are used on signs, although the warning symbol is placed on a diamond rather than the more usual triangle. Signs with a yellow background are used for permanent signs and signs with an orange background for temporary hazards (Figure E.2): http://www.landtransport.govt.nz/roadcode/about-signs/main-typesl#warning. A sub-plate indicating ‘Caution Slip’ or ‘Caution Washout’ is often used indicating that the signs are often used to indicate landslides in a more general sense than simply rockfall (G Pinches, Personal Communication, 2007). 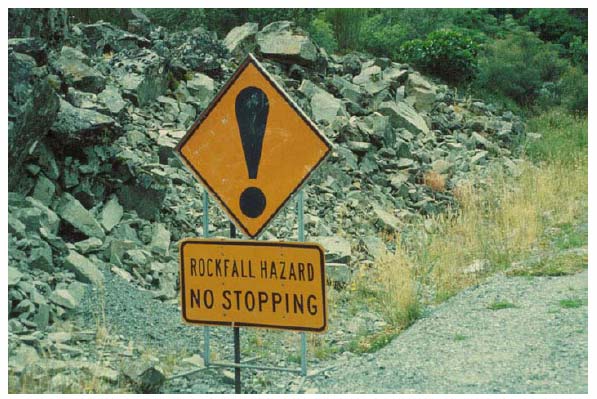 In Greece the sign illustrated in Figure E.4 is used for rockfalls. It is understood that landslides are not generally signed in any systematic fashion (P Marinos, Personal Communication, 2007).

In British Columbia in Canada signs are standardized in a catalogue: http://www.th.gov.bc.ca/publications/eng_publications/electrical/Sign_Cat_2003.pdf.

These include a Slide Area/End Slide Area (Figure E.5a and E.5b). While this is not overly descriptive it appears to be intended to decrease the time spent by motorists in the section of concern, and therefore intending to reduce the temporal probability factor of the hazard equation.

There is also a rockfall sign (Figure E.5c), similar to the one used in the UK (Figure E.1a), however this is stated to indicate ‘watch for rock on road ahead’. Other signs in use include ‘road subject to flooding’ (Figure E.5d) to which a sub-plate indicating the distance over which the hazard is extant may be added (K Turner, Personal Communication, 2007).

Figure E.5 – Landslide and other warning signs used in British Columbia in Canada: sign indicating the beginning (a) and end (b) of a slide area; (c) indicating ‘watch for rock on road ahead’; and (d) road subject to flooding.

Other signs in use in British Columbia include warning signs for stream-based debris flows (Figure E.6). More general hazard information signs (Figure E.7) are located in lay-bys which indicate areas in, and routes on, which hazards might be encountered whilst and also give information on the nature and background to the hazards. Both types of sign, in addition to providing information on the type and location of the hazard give advice on what not to do in the hazard areas. 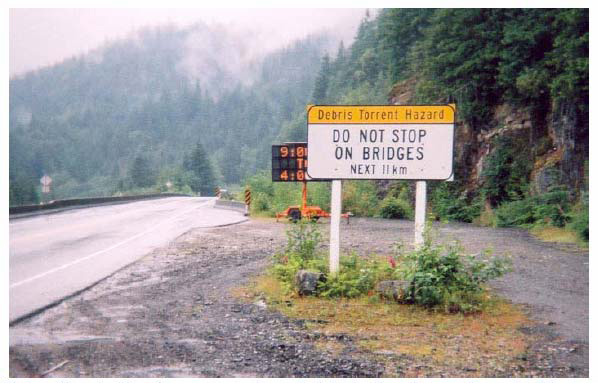 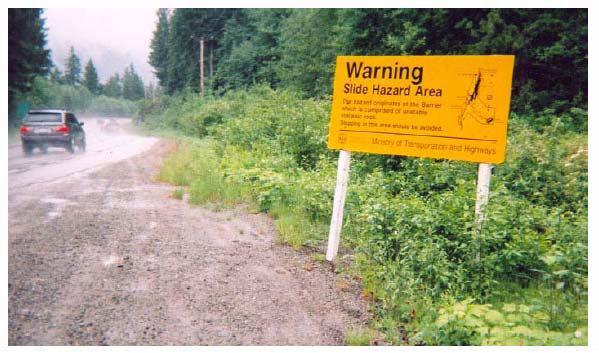 In Hong Kong essentially the same sign is used for rockfall hazards as in the UK (Figure E.8). 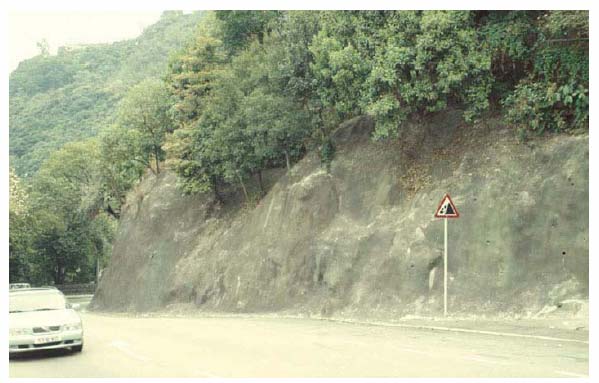 Figure E.9 illustrates the symbol used to warn of landslips in Hong Kong as part of the warning system described in Appendix G. The symbol is used in the media and on the internet as well as on public warning signs (Chan and Mak, 2007).

A variety of other signs are used in relation to landslide hazards in Hong Kong, including those forming part of the slope registration system and general information signs intended to give warning of landslide risk to residents and pedestrians. Of perhaps most interest in the context of roads is the use of the same symbol sign as that illustrated in Figure E.8 to indicate not only the start of a landslide hazard, but also the distance over which the hazard is extant (Figure E.10) and the end of the hazard area (Figure E.11).

Figure E.10– Rockfall road sign in Hong Kong indicating the start of the hazard and the distance over which it is extant. 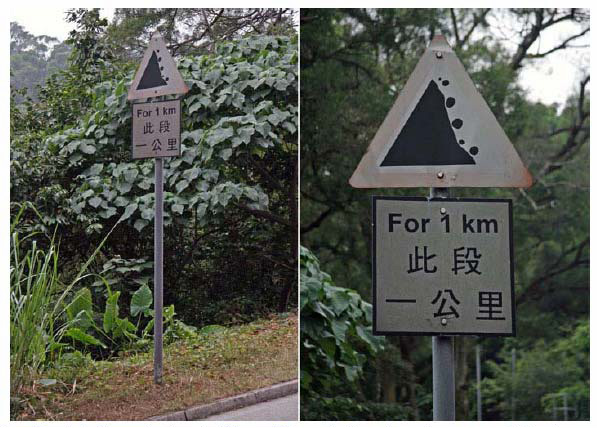 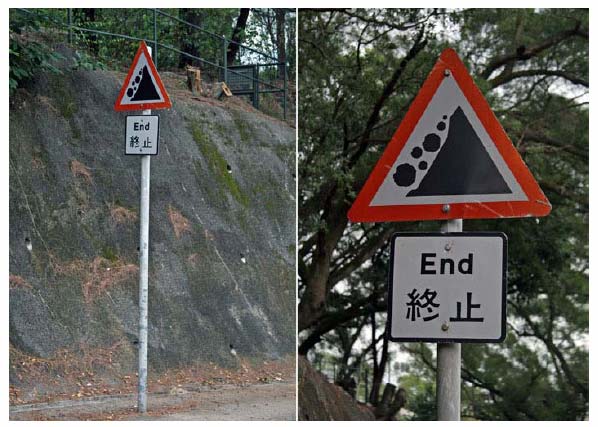 In Croatia the same sign is used for rockfall hazards as in the UK (Figure E.12) with the use of a distance sub-plate also being a common factor albeit that the distance is quoted in metres rather than in miles and/or yards. 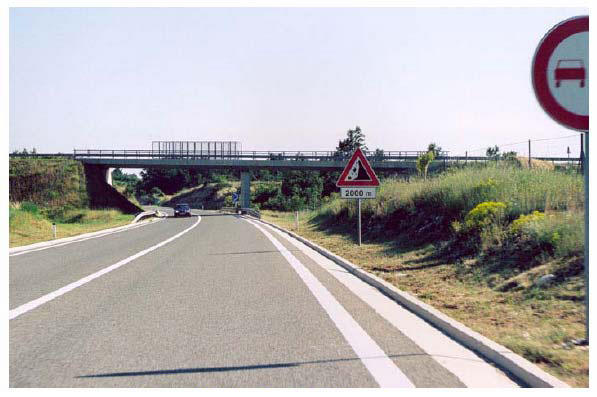 A wide variety of signing for landslides may be encountered in the United States of America (USA). These include signs dealing with quite specific types of landslide hazard (Figure E.13). 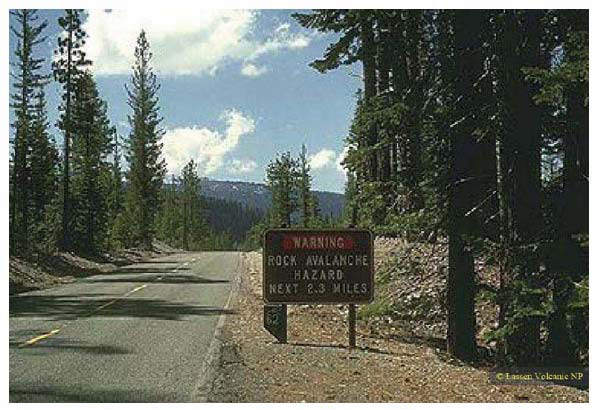 More typically the signs indicate a particular type of hazard, often with an indication of the distance over which the hazard is extant (Figure E.14 and E.15). 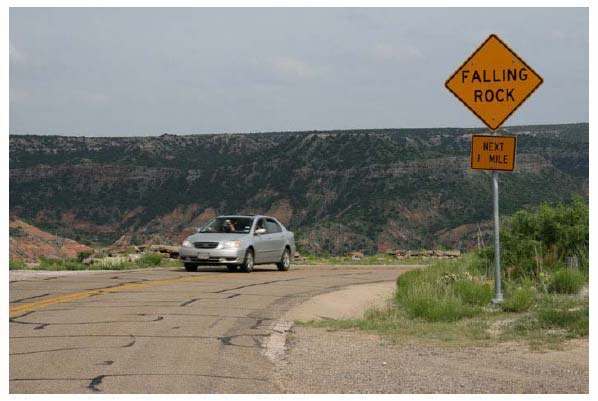 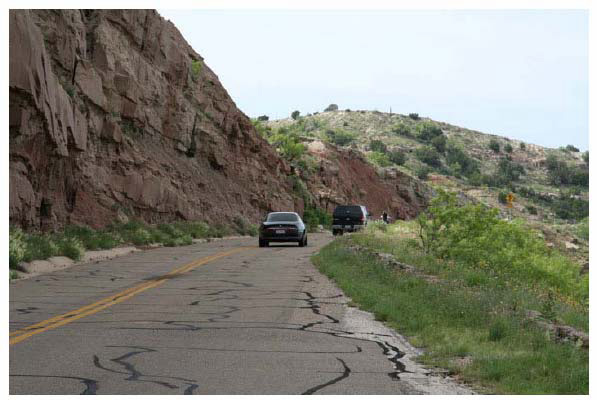 Other hazards are often signed in a similar fashion. For example, hazards associated with streams that become active during and after heavy rainfall are sign as illustrated in Figures E.16 and E.17. In this case a maximum speed limit is imposed. 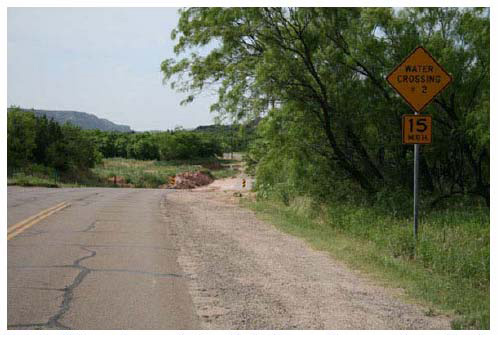 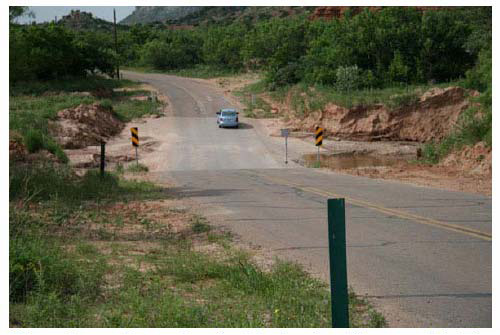 Such signs are not restricted to relatively lightly trafficked park roads but are also used on heavily trafficked interstate highways. Figures E.18 to E.120 illustrate 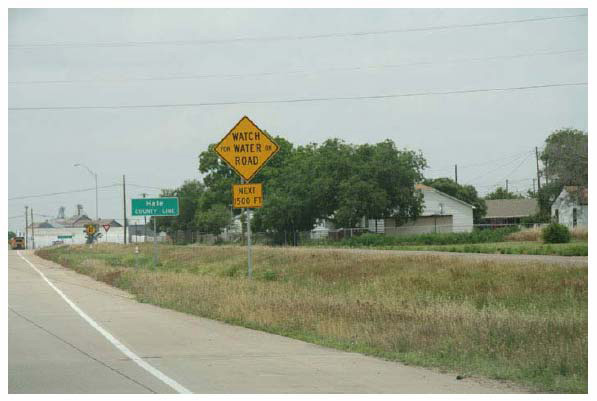 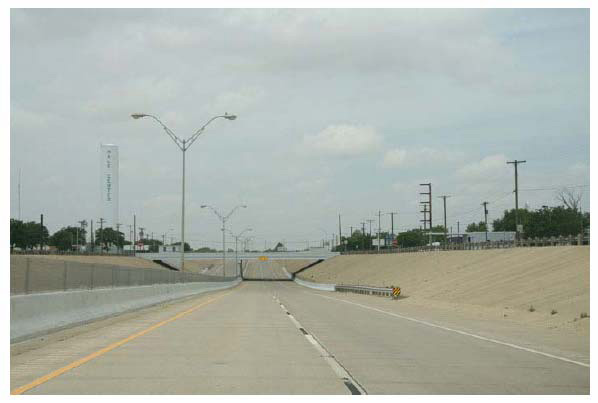 Similarly, less effective signing in relation to hazards may be encountered in the USA. Figure E.21 shows a sign for a ‘Tornado Shelter’ – the relevant text is in black on a white sub-plate below the large blue sign to the right of the picture. The large blue sign promotes the rest area which includes the tornado shelter (Figure E.22

Figure E.21– Sign for ‘Tornado Shelter’ at a rest area Interstate 28, Hale County, Texas. The white ‘Tornado Shelter’ sign is on a white background and is located below the blue ‘Rest Area Next Right’ sign to the right of the picture. 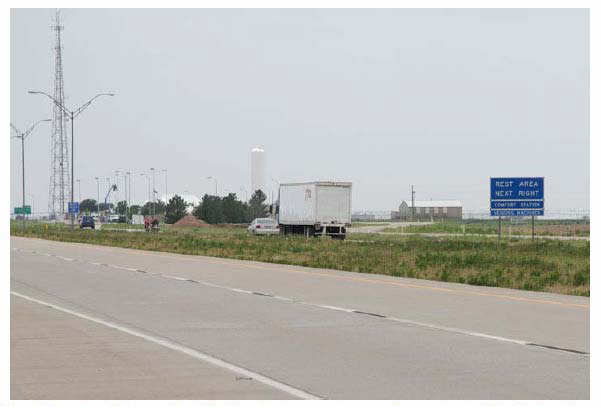 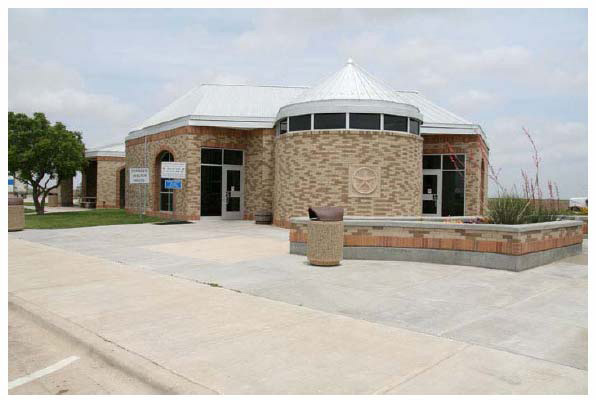