Landslides are a natural part of the group of processes by which mountainous landscapes erode over the course of time.

It is important that a precautionary approach is followed when travelling in the more mountainous areas of Scotland during periods when landslides are likely. Landslides are most likely during and immediately after periods of very heavy rainfall, especially if the heavy rain follows an extended rainy period. Landslides are most prevalent in the periods July to August and October to January.

Simple precautions that you can take to minimise the chances of your journey being disrupted during periods when landslides are more likely include the following:

Scotland is renowned for some of the most spectacular mountain landscapes in the World. Such natural beauty attracts visitors who make use of the landscape for a variety of recreational purposes (Figure F.1).

The mountain landscape of Scotland is developing actively, as are all such landscapes. The current period of activity began around 10,000 years ago towards the end of the last ice advance and retreat to affect the area north of Scotland. All of this means that landslides happen fairly frequently in Scotland. Most occur high on the hillsides and do not have any effect on Scotland’s resident population, its visitors or its infrastructure.

However, occasionally, an episode of significant magnitude will inevitably occur. Such an episode was experienced in August 2004 when rainfall substantially in excess of the norm fell in parts of Scotland.

The rainfall was both intense and long lasting and a large number of sudden and rapid landslides, in the form of debris flows, were experienced in the hills of Scotland. A small number of these affected the trunk road network, notably the A83 between Glen Kinglas and to the north of Cairndow (9 August), the A9 to the north of Dunkeld (11 August), and the A85 at Glen Ogle (18 August) (Figure F.2). 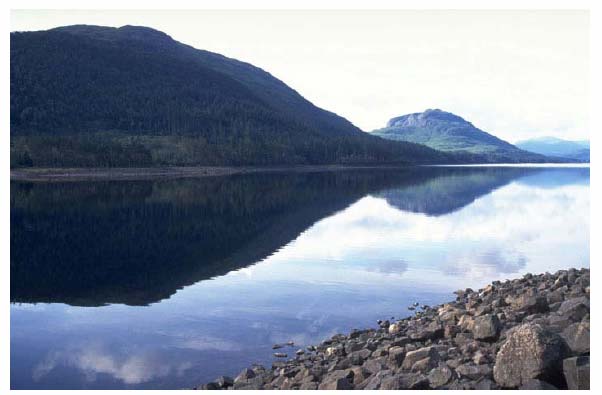 While major injuries were avoided in August 2004, some 57 people were taken to safety by helicopter after being trapped between the two debris flows on the A85 in Glen Ogle (Figure F.3). The A85 was closed for four days and the events on the A83 and the A9 meant that they were closed for two days. The disruption experienced by local and tourist traffic, as well as to goods vehicles, was substantial. 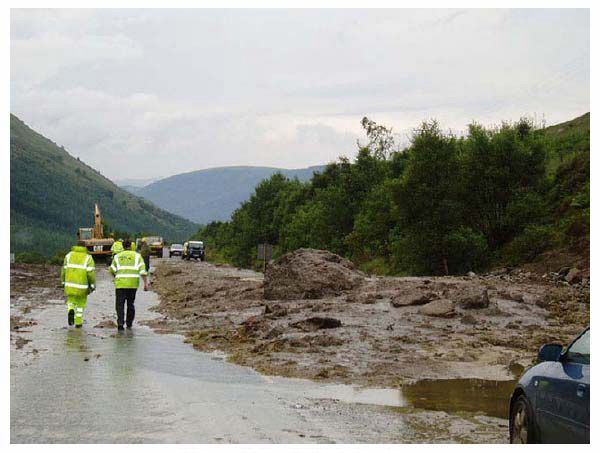 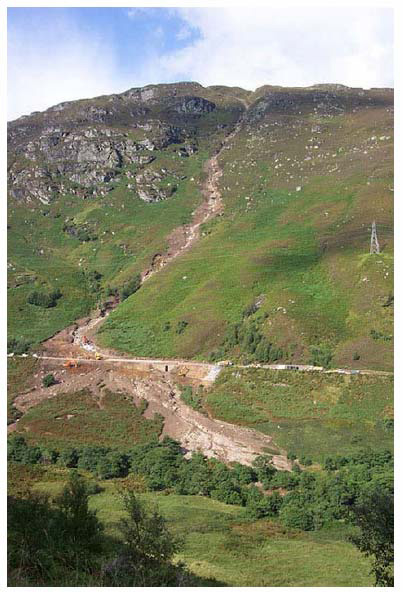 Following the events of August 2004, Transport Scotland commissioned studies on debris flows and their management. Initial results were published in Summer 2005 and an implementation report in Autumn 2008 (available from www.transportscotland.gov.uk).

The initial study specifically dealt with the following issues:

The 2008 study includes a detailed review of the network to identify the locations of greatest hazard, to rank those hazards and to develop appropriate management and mitigation measures that may be targeted at appropriate sites. A suite of management actions is currently being implemented on the network.

The overall objective of these studies is to ensure that in the future Transport Scotland has a system in place for assessing and managing the hazards posed by debris flows. In addition, the system will rank the hazards on the network in terms of their relative potential effects on road users. Whilst it is acknowledged from the outset that it is not possible to prevent the occurrence of such events this system will ensure that the exposure of road users to the consequences of future debris flow events is minimised.