A.27 This intervention supports the objective to reduce the fatal and severe accident rates on strategic routes in North and West Scotland. Targeted programmes of measures are required on these corridors, where specific objectives have been identified to address safety related issues.

A.28 A number of bespoke improvements such as widening, improved alignment and some 2+1 sections are proposed to address identified high severity accident clusters and locations of accident severity along the relevant routes. In addition to the proposed physical works speed enforcement measures could be considered at appropriate locations.

A.29 The bespoke improvements would include measures such as:

A.30 The local realignments and junction improvements are expected to improve safety. For example, evidence elsewhere suggests that the introduction of climbing lanes can result in a significant reduction in accidents (up to 50 per cent) on single carriageway routes. The introduction of the appropriate speed enforcement measures could also result in the safer operation of the road network, due to a reduction in speeding vehicles. Evidence from trials elsewhere indicate an almost 100 per cent compliance with the speed limit under these systems.

A.31 It is forecast that through the introduction of these measures, the overall number of accidents and the proportion of serious and fatal accidents will reduce to levels closer to the national rate. This will contribute to the Scottish Government’s Purpose of creating a ‘safer and stronger’ Scotland.

A.32 This intervention includes a range of safety-related and asset management schemes, as addressed in the Strategic Road Safety Plan and the Road Asset Management Plan. 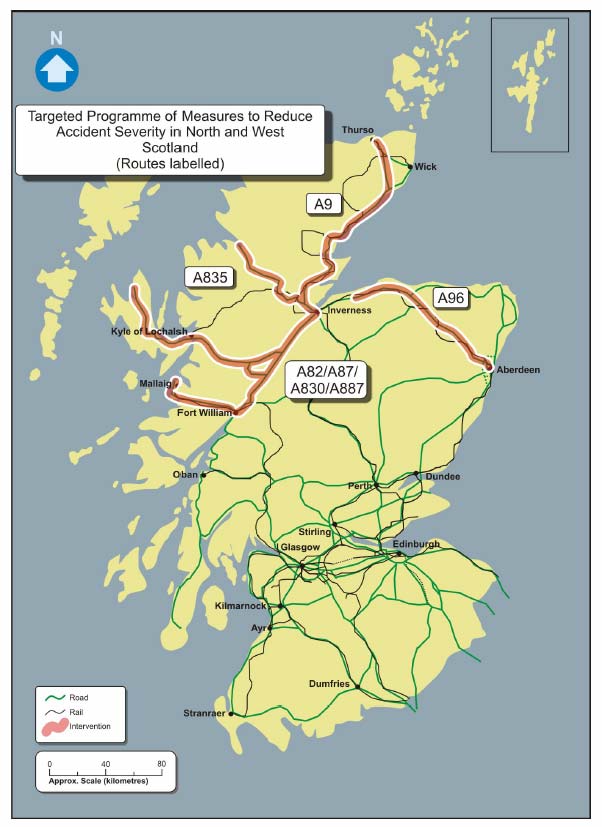 A.33 Some of the measures required on these routes have been identified in the relevant Route Action Plans and ongoing route management. Some of these measures have already been implemented or are currently committed – others are awaiting approval and / or programming. Improving safety on these routes is likely to be met with a positive public response.

A.34 The total estimated cost of full implementation of the above safety schemes is in the range £100-£250 million.

A.35 Much of the work associated with the individual schemes in this intervention has already been developed to a high level. These components, along with the additional safety measures proposed, could be implemented within the short term. Due to the rural nature of many of the corridors final design and implementation work would have to take account of the local terrain when considering deliverability.