5 – ROUTE MANAGEMENT ON OTHER ROAD CORRIDORS

5 – ROUTE MANAGEMENT ON OTHER ROAD CORRIDORS

A.36 This includes a series of initiatives to implement road-based improvements with a combination of network optimisation through route management and targeted investment in relatively local interventions. The Plans included within this intervention are:

A.37 These routes generally perform well, and as such no objectives have been established to address corridor specific issues.

A.38 However, there is a need to maintain and safely operate these in the context of a route management strategy. This intervention would include a variety of localised improvements that would be undertaken in tandem, and driven by, the trunk road maintenance contracts. These enhancements would be targeted to bring the physical condition and safety standards of the routes concerned to a level which will support the expected levels of traffic during the period of the review.

A.39 There are a number of corridors where no strategic issues relating to network performance have been identified, but there is an ongoing need to maintain and safely operate the network. These route action plans will perform this role.

A.40 These interventions would therefore address isolated constraints, and although the immediate benefits would be felt at a more local level, for example through isolated junction improvements, the programme of works would contribute towards the need to maintaining and safely operate the network.

A.41 Reductions in accident numbers would be expected at the improved locations, with up to 50 per cent reduction in certain sections. Severity rates are likely to be reduced by new 2+1 and re-aligned sections.

A.42 These Plans include a range of safety-related and asset management interventions, as addressed in the Strategic Road Safety Plan and the Road Asset Management Plan. 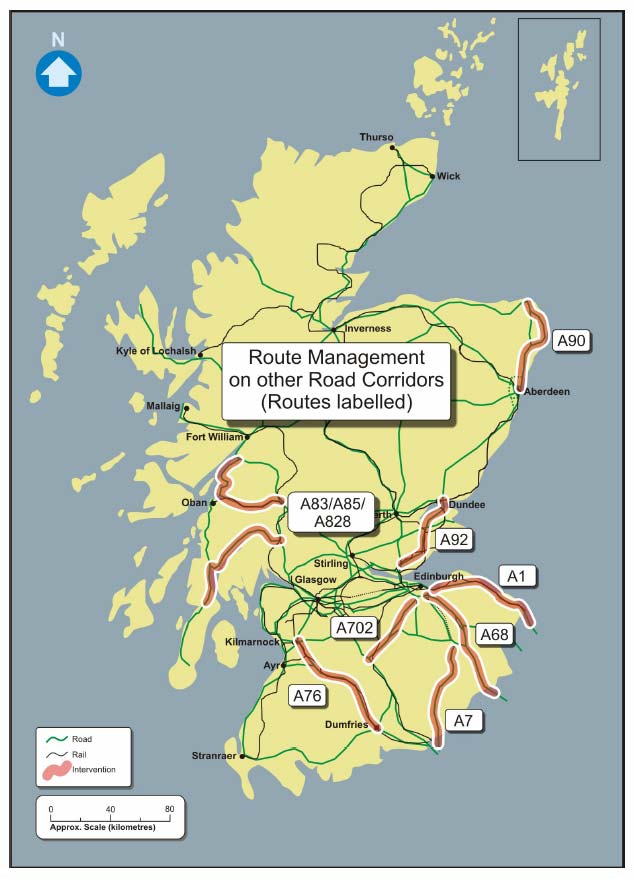 A.43 Some of the measures required on these routes have been identified in the relevant Route Action Plans and ongoing route management. Some of these measures have already been implemented or are currently committed – others are awaiting approval and / or programming. Improving safety on these routes is likely to be met with a positive public response.

A.45 The deliverability of this intervention is considered technically and operationally feasible. Most of the measures have already been developed to a high level of readiness, and can be implemented within the short term. There are no major technical issues anticipated from this intervention, however design would have to account for conditions along the corridor such as terrain. Any visual impact due to speed enforcement measures would also have to be recognised.