A.46 This intervention supports the ‘NPF2’ and ‘Scotland’s Railways’ to work towards an electrified rail network across the strategic routes in Scotland and contributes to a number of objectives relating to emissions and operations.

A.47 Rail electrification can contribute to emissions reduction by allowing train power to come from more environmentally friendly sources. There are operational benefits compared with diesel powered trains both in terms of reduced journey times and operating costs. It also gives the opportunity for interoperability and more efficient use of rolling stock, particularly in the West of Scotland where running through some stations is restricted to electric rolling stock.

A.48 It is envisaged that electrification would be delivered on a phased basis. In the short term, this would include:

A.49 In the longer term, extending into the period beyond STPR, this would include:

A.51 Currently 23 per cent of the Scottish rail network is electrified and this intervention would see the expansion of this over the greater part of the network. Electrified services would reduce energy consumption by 15 per cent for inter-urban and 20 per cent for stopping services. There are a number of areas where objectives to reduce emissions would be supported by this intervention.

A.52 This intervention would also allow greater flexibility of operation for services across the network, giving opportunities for new routes and through services. Electrification would support other rail interventions as part of an overall strategy for ‘step-change’ performance across parts of the system, particularly in Fife.

A.53 The electrification of routes is likely to be linked to other elements of route modernisation, for example, the upgrading of signalling systems. A strategy of electrification has been highlighted in the National Transport Strategy (‘Scotland’s Railways’ / Freight Action Plan), The Scottish Rail Planning Assessment33, and the Network Rail Scottish Route Utilisation Strategy34. 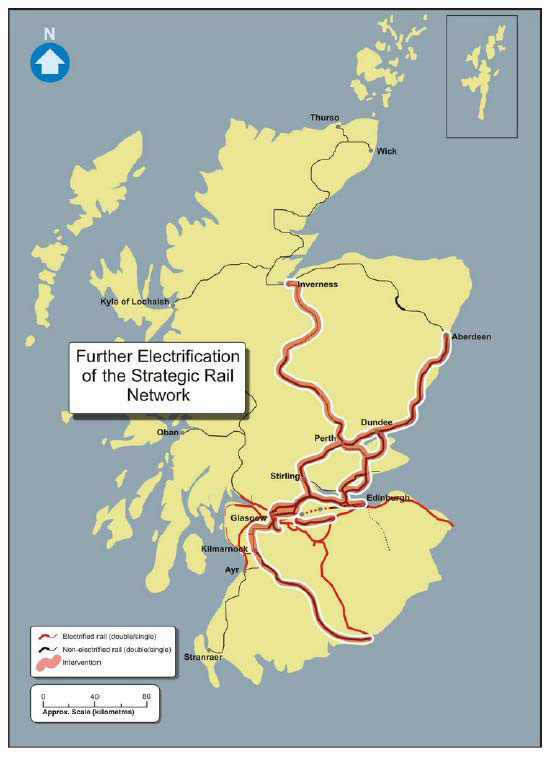 A.54 Network electrification is included in the Scottish Ministers’ High Level Output Statement35 for rail services (Summer 2007) as a ‘Tier 3’ intervention. Electrification of the Edinburgh to Glasgow route and associated connecting links was included in a Ministerial Statement on 27 Sep 2007. The electrification of the route between Glasgow and Edinburgh has been planned to Guide to Railway Investment Programme level 1. No other interventions have been developed at this stage. The intervention to electrify Scotland’s rail network has been in the public domain for some time now through Scotland’s Railways. It is generally accepted that this intervention would provide a number of positive benefits to the general public in terms of faster journey times and a reduction in emissions.

A.55 There are significant costs associated with implementing electrification. As well as the overhead cabling system, modifications to structures such as bridges and tunnels are often required to accommodate the increased clearance required.

A.56 The estimated costs of the proposed phased electrification plan are expected to be in the range £250m to £500m for each of the five phases.

A.57 The technologies for electrification already exist, and there are no major technical barriers to implementation. There would be an impact on the operation of existing rail services during the electrification of these routes. While some of the work could be carried out during normal maintenance possessions and during the night, it is likely that there will be some significant work required which would require longer closures. These could be mitigated through diverting over other routes where possible, but there could still be some disruption for existing rail users.