7 – RECONFIGURATION OF THE NATIONAL RAIL TIMETABLE

7 – RECONFIGURATION OF THE NATIONAL RAIL TIMETABLE

A.58 Several objectives have been identified to reduce journey times by public transport, particularly between Aberdeen/Inverness and the Central Belt. At present, the Scottish Rail Network has no significant service hierarchy, with many services performing multiple roles in linking cities and intermediate stops, resulting in some cases of uncompetitive journey times.

A.59 This intervention would address these issues by re-casting the rail service timetable to provide fast, limited-stop trains which would serve longer distance journeys between the cities and replace some of the existing semi-fast services. Intermediate destinations would be catered for by stopping services.

A.60 It is likely that this intervention would be undertaken on a phased basis, in conjunction with other interventions, particularly any programme of network-wide minor improvements.

A.61 There would, of course, be a requirement to ensure that an adequate number of semi-fast or stopping services remained in place for the intermediate locations. These may be supplemented by additional local bus services. This intervention is predicted on the basis of no requirement for new infrastructure or rolling stock.

A.62 This intervention supports the objective to reduce inter-urban journey times on public transport by reducing journey times between Aberdeen/Inverness and the Central Belt by up to 20 minutes. Forecasts show a relatively small overall increase in rail passengers, however, the majority of this increase is related to a transfer from longer distance car traffic, resulting in reduced emissions from road based vehicles. While the benefits in terms of growth in passenger-kilometres are relatively modest, there are significant benefits to those already using the services through a reduction in journey time, for example a reduction of around 20 minutes to journeys between Aberdeen/Inverness and the Central Belt.

A.63 The costs of providing this intervention are low with the largest benefits accruing to longer distance travellers. However, there could be an adverse impact on shorter distance trips that currently use main line services, although these could be addressed through the provision of local bus services.

A.64 Although this intervention is itself assumed not to require any additional rolling stock or infrastructure, there are clear synergies and interaction with other proposed interventions involving targeted enhancements which tend to build on this strategy. These other proposals allow for additional service frequency as well as the faster services proposed here, but at the cost of additional rolling stock and infrastructure works. Examples include the proposals to introduce additional services between the main centres on a number of routes as well as proposals to enhance cross-city and suburban train services. 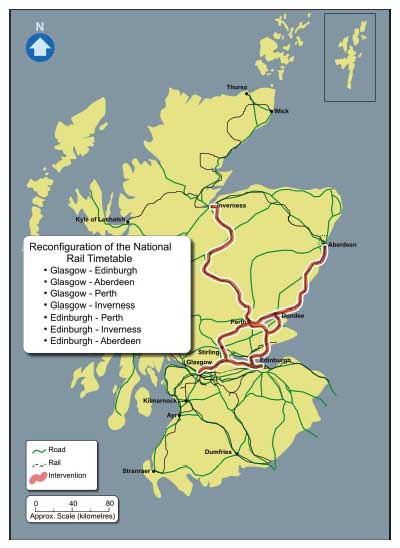 A.65 The timetable recast is in the early stages of feasibility planning. It is expected that this intervention would be supported; however any decrease in the level of service at any station could face some local opposition.

A.66 It is possible that some minor infrastructure enhancements may be required to enable the mix of fast and stopping services to operate over existing routes and to maintain operational performance standards. However, the estimated overall cost for this intervention is relatively low (less than £10m).

A.67 The delivery of changes to the inter-city timetable is likely to require a significant re-cast of the timetable for the entire Scottish rail network. This may be best delivered as part of the specification for the next rail franchise when it is renewed in 2014, to allow for a competitive approach to the delivery of a compliant, deliverable and cost effective operation. There would not be any significant technical constraints for the delivery of this intervention, although any changes to the timetable would have to be made within the current limitations within the rail network.