A.107 This intervention is over and above the day-to-day maintenance of the rail network which is the responsibility of Network Rail and set out in Intervention 2.

A.108 There are parts of the railway network that are operating close to or at capacity during peak periods, with limited or no opportunity for additional services to be operated. Much of the existing signalling infrastructure is becoming less fit-for-purpose. This intervention would cover operational and relatively small scale infrastructure measures such as:

A.109 This intervention provides upgrades for rail signalling, as well as track and junction layouts to reduce headways and allow more trains to use the network.

A.110 This intervention would have the effect of improving operational performance and would also lead to reduced journey times where train times are currently constrained by limited capacity and a mix of train speeds. These benefits by themselves would encourage some modal shift from car to rail, hence reducing traffic emissions. In many areas of Scotland, additional rail services could contribute towards objectives where localised rail constraints have been identified. This intervention would provide a strategy to systematically address these constraints.

A.111 The main benefits of this intervention include:

A.112 The requirement for strategic rail infrastructure capacity enhancements is highlighted in the National Transport Strategy (Scotland’s Railways and Freight Action Plan) as well as the Scottish Planning Assessment and Route Utilisation Strategy. The significance of providing for rail freight access to ports is highlighted in the second National Planning Framework (NPF2), with the International Container Terminal at Rosyth being recognised as a ‘National Development’. 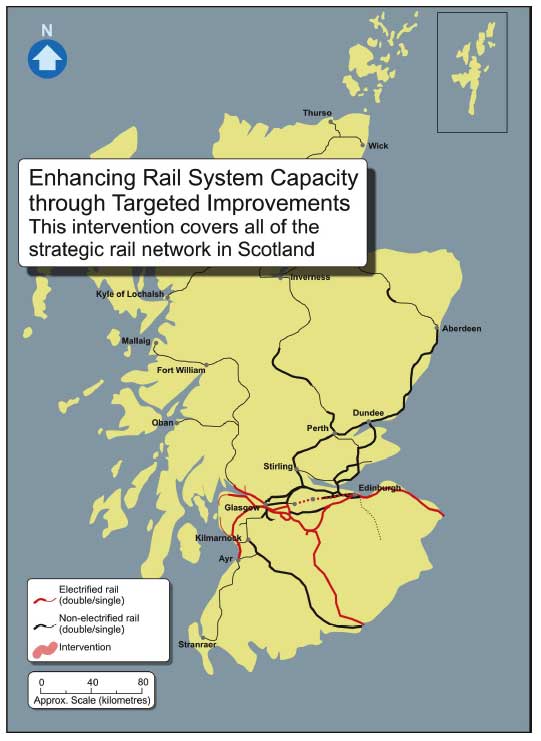 A.115 This intervention will be deliverable by Transport Scotland in partnership with Network Rail in their role as owner and operator of the rail infrastructure. Implementing this intervention would require work to take place on the existing rail network. This work would have to be carried out during possessions, where parts of the railway network would be closed, impacting on passenger journeys. However, much of this would could coincide with general maintenance of the network and take place during periods of low demand.