13 – RAIL ENHANCEMENTS IN THE EAST OF SCOTLAND

13 – RAIL ENHANCEMENTS IN THE EAST OF SCOTLAND

A.116 This intervention includes an increase in service frequency on rail services across the east of Scotland.

A.117 This intervention would include services such as:

A.118 This intervention would include additional rolling stock and facilities to support and maintain these services.

A.119 There is limited capacity available at Waverley Station and therefore capacity improvements would be required or alternatively , more efficient use of Waverley would have to be developed (which may include terminating some trains at Haymarket north platform or an equivalent on the south side provided as part of the committed Edinburgh to Glasgow improvements).

A.120 This intervention would include remodelling of various parts of the network to enhance capacity for these services, such as Portobello Junction to Newcraighall and Dunbar station. Additional capacity enhancements such as resignalling and loops would also be included where necessary.

A.121 This intervention would contribute towards the objectives for Edinburgh and the corridors serving the city, particularly in providing access to areas of economic activity. The increased provision would increase the labour market catchment that can commute into Edinburgh within 60-minutes by 5-10 per cent.

A.122 This intervention would provide additional rail capacity on some of the busiest rail lines in Scotland, resulting in a transfer of up to 5 per cent modal shift from car to rail. The reduction in car journeys could positively contribute towards improved air quality within air quality management areas.

A.123 This intervention is forecast to capture trips from car travel, with an increase of over 1100 new rail passengers during each peak hour period, approximately half of whom transfer from car.

A.124 Improvements to rail services and station facilities on these routes have been raised in the SEStran Regional Transport Strategy, the Scottish Strategic Rail Study37 and the Tay Estuary Rail Study38. 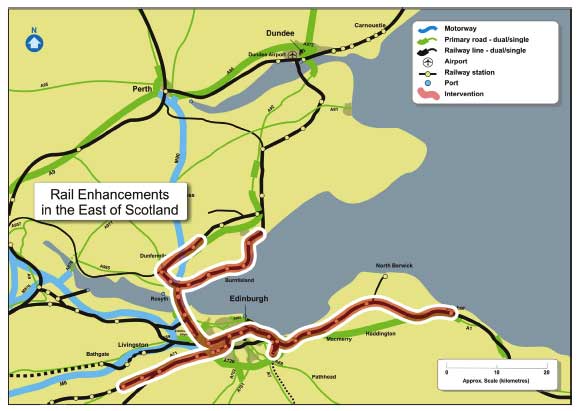 A.125 A Ministerial Statement made on 27th Sept 2007 proposed improvements on the route between Edinburgh and Fife in order to provide improved rail connections to Edinburgh Airport. This intervention is expected to be supported with no significant objections raised.

A.127 The proposed frequency enhancements will require careful timetabling in order to fit as many trains as possible through Waverley station, making full use of the capacity available. This intervention would require significant engineering works on various parts of the rail network. However, increased service frequencies across the east of Scotland would bring capacity enhancement and additional seating.