A.138 This intervention was identified early in the STPR and brought forward in a study which considered improvements to the capacity, frequency and journey time of rail services between Edinburgh and Glasgow.

A.139 This intervention supports a number of objectives relating to access to jobs from the perspective of both employers and employees, emissions and public transport capacity on the corridor between Edinburgh and Glasgow.

A.140 A number of potential packages of infrastructure and service enhancements were examined. The Minister announced to Parliament in Autumn 2007 that the preferred strategy would be to provide:

A.141 This intervention would provide an increase in capacity between Edinburgh and Glasgow as well as reducing the journey time between the two cities. These combined would help maintain, and in some cases enhance, the labour market catchment area that can commute into the two cities within 60-minutes, counteracting the forecast decrease in labour market catchment caused by forecast increases in congestion and journey times on the road network. The improvements would encourage travellers to choose to travel by rail instead of private car. Electrification of the lines would also further help to reduce emissions within the corridor between Edinburgh and Glasgow. The intervention also provides a key linkage from the rail network to Edinburgh Airport, through the provision of a new station at Gogar and interchange with the tram.

A.142 The enhancement to services between Edinburgh and Glasgow via Shotts or Carstairs would improve public transport capacity between Edinburgh and Livingston / Glasgow. It would also improve connectivity and interchange opportunities (via Glasgow Central) between Edinburgh and Inverclyde / Ayrshire, further helping to maintain the labour market catchment area for the two cities, and encouraging rail use in place of private car.

A.143 This intervention, as a committed scheme, has a strong business case, offering value for money.

A.144 The requirement for improved rail services between Edinburgh and Glasgow has been highlighted in the National Transport Strategy (Scotland’s Railways and Freight Action Plan) and in the Scottish Ministers High Level Output Specification. The intervention is also included in the Scottish Rail Planning Assessment and the Route Utilisation Strategy, as well as the SEStran Regional Transport Strategy 2008-2023. 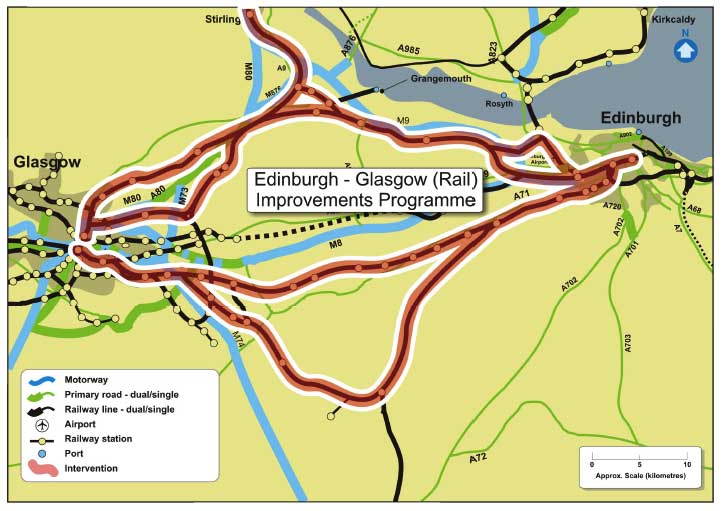 A.145 The preferred strategy was announced in a Ministerial Statement made on 27 September 2007.

A.146 The cost for this intervention has already been committed, but is estimated to be in the range £500m - £1bn.

A.147 It appears feasible to provide the necessary infrastructure although the need for land purchase will extend the delivery period and electrification will need detailed investigation as well as the impact of signalling changes. A number of component parts of this intervention are deliverable within the short to medium term horizon and the full intervention could potentially be delivered by 2016.