A.163 This intervention supports the objectives to reduce journey time and increase travel opportunities between Inverness and Perth and more effectively link Inverness to the Central Belt.

A.164 Improvements to the Highland Main Line are proposed, providing:

A.165 Journey time reductions to benefit passenger services would be delivered through line speed improvements, additional loops, dynamic loops or lengthening of double track sections, signalling improvements and more powerful traction. It is envisaged that this could be delivered in two phases. Phase 1 would comprise the recognised Highland Main Line improvements as proposed in the Highland Room for Growth Study. Phase 2 would comprise a more significant enhancement to allow faster services to operate.

A.166 Additional freight improvements: The passenger enhancements could be optimised to also benefit freight operations. It is envisaged that this would include:

A.167 Included within this intervention is the capability to operate low floor wagons that are currently becoming available for use on the network. These would allow standard containers to be carried on existing infrastructure with minimal physical works, such as targeted gauge enhancements at appropriate structures;

A.168 This intervention would provide journey time improvements between Inverness and Perth and onwards to the Central Belt, contributing to objectives relating to these issues. Increasing the frequency of services would provide further benefits through additional opportunities to travel. The reduction in journey time of around 20 per cent is significant and would make the rail service more competitive with the current car journey.

A.169 The freight improvements would make it considerably more attractive for freight hauliers to move containers and other goods by rail, by reducing journey times.

A.170 Service improvements on this corridor have been highlighted in the Scottish Ministers’ High Level Output Specification and the Highland "Room for Growth" Study41, and interface with the Scottish Rail Planning Assessment and the Network Rail Route Utilisation Strategy for Scotland. This intervention would build on Intervention 7 (Reconfiguration of the National Rail Timetable). 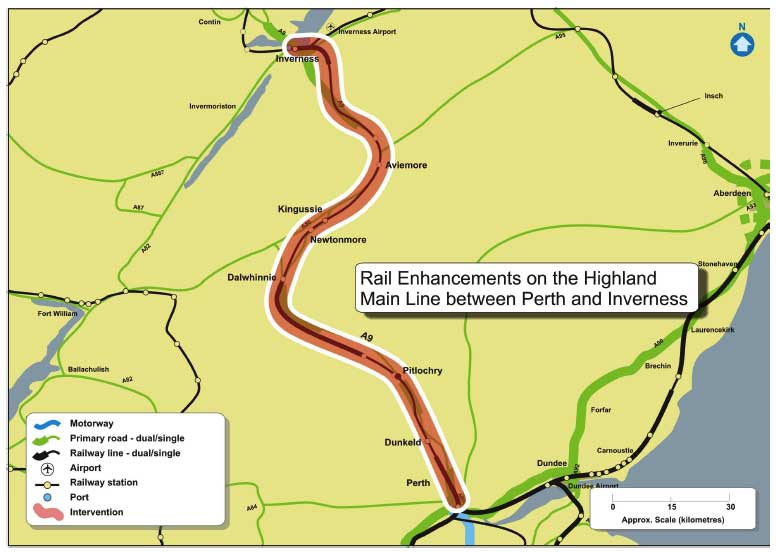 A.171 As a ‘Tier 3’ intervention in the Scottish Ministers’ High Level Output Specification, Network Rail have been asked to produce a credible and affordable delivery plan to progress development of this intervention, for potential implementation during Control Period 4 (2009-2014). There has been no specific detailed consultation on this intervention. However a commitment to Phase 1 was made in a Scottish Government statement on the 5th of August 2008.

A.172 The passenger improvements are expected to cost in the region of £50m - £100m for the first phase. The second phase of the intervention has a relatively high cost (primarily driven by the need to improve structures to take the increased loading of higher speed services), with an expected range of £100m -£250m. The cost of the additional freight improvements is expected to be in the range £50m - £100m.

A.173 The physical improvements required to support this intervention would need to be carefully managed in order to minimise the potential adverse impact on the environment.

A.174 The environmental impacts this intervention has on designated biodiversity and landscape sites have been identified at the strategic level as part of the Strategic Environmental Assessment (SEA) and Appropriate Assessment. Appropriate mitigation and avoidance measures have been identified and will be further refined should this intervention be taken forward.

A.175 This intervention should gain support in terms of the environmental benefits gained through capturing journeys currently made by cars and goods vehicles.