18 – UPGRADE A96 TO DUAL CARRIAGEWAY BETWEEN INVERNESS AND NAIRN

18 – UPGRADE A96 TO DUAL CARRIAGEWAY BETWEEN INVERNESS AND NAIRN

A.177 A new link connecting the A96 and the A9 (south of Inverness) would provide relief for Raigmore Interchange.

A.178 Upgrading the A96 to dual carriageway between Inverness and Nairn is expected to reduce accident rates (by around 40 per cent) by providing a higher standard of road. It would also reduce journey times along this section of the corridor, improving connectivity between Inverness and communities to the east (including the planned developments in this corridor at Tornagrain), and helping to increase the labour catchment area for Inverness. Improvements would also be felt on longer distance road journeys between Aberdeen and Inverness.

A.179 This intervention would have an adverse environmental impact largely due to construction impacts on the surrounding natural and historic features.

A.180 The link between the A9 and the A96 would further reduce congestion by allowing traffic between the A9 and A96 to avoid local traffic congestion at Raigmore Interchange. These benefits are reflected in the economic analysis, which suggests that the intervention offers value for money.

A.181 The intervention would link to various other A96 improvements identified in the Route Action Plan (aimed at reducing accident severity), and builds on the Strategic Road Safety Plan and Road Asset Management Plan. Further enhancements to this route may also be a possibility as part of the targeted road congestion interventions described below.

A.182 This intervention would also assist in facilitating the growth on the A96 as identified in the A96 Masterplan proposals. Improvements on this corridor were highlighted in the Hitrans Regional Transport Partnership (RTP) and Horizontal themes, the Inverness Airport Surface Access Strategy, and in the Aberdeen to Inverness Transport Corridor Study42. 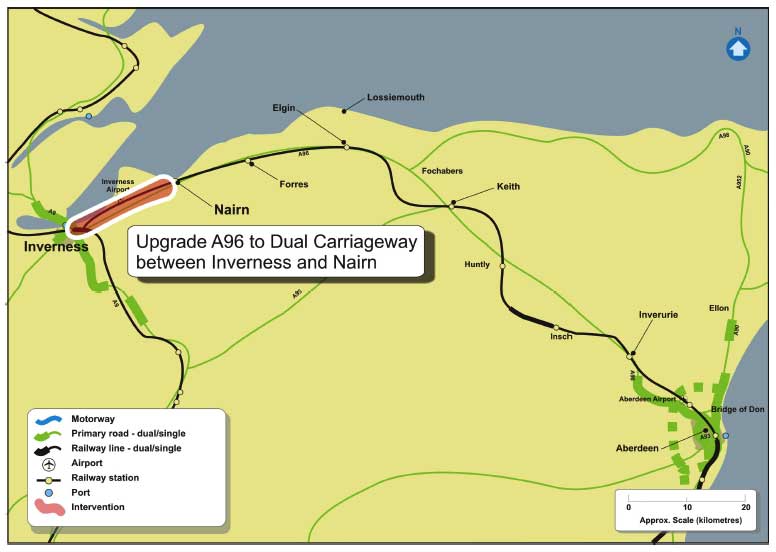 A.183 This is an important intervention to the economy of Inverness and the surrounding area, with significant public interest at both local and regional levels.

A.184 The dualling of the A96 from Inverness to Nairn has not been progressed to any formal design stage. However, the proposed link from the A96 to A9 (which is the Eastern Link of the Inverness Trunk Link Road) has been the subject of more detailed design by the Highland Council.

A.186 It is anticipated that there are unlikely to be any technical issues with constructing this intervention.

A.187 The environmental impacts this intervention has on the surrounding natural and historical features have been identified at the strategic level as part of the Strategic Environmental Assessment (SEA) and Appropriate Assessment. Appropriate mitigation and avoidance measures have been identified and will be further refined should this intervention be taken forward.