A.189 Phase 1 would involve the introduction of new loops in the area and line speed improvements.

A.190 Phase 2 would involve more comprehensive improvements to line speed, journey times and the provision of some dual tracking on approaches to Inverness and Aberdeen. Development of this intervention will also give consideration to the option of a station at Kintore.

A.191 This intervention would reduce journey times between Aberdeen and Inverness and improve connectivity between the cities and the communities along the corridor. It would also increase opportunities to travel by providing a more frequent service at regular intervals throughout the day.

A.192 At the Inverness end of the route, the intervention would improve connectivity by public transport between Inverness City Centre and the growth area to the east including Inverness Airport.

A.194 The journey time savings of approximately 20 minutes are significant and this, coupled with an increased frequency, would make rail travel a genuine alternative to car travel. There will also be benefits from emissions reduction resulting from the ability to capture a higher share of inter-city travel.

A.195 The cost of this intervention is driven by the need to provide double track on the approach to Aberdeen. However, the improvements to journey time of around 20 per cent would be significant both for existing users and for those transferring from car and it is therefore considered to offer value-for-money.

A.196 Service improvements on this corridor have been highlighted in the Scottish Ministers High Level Output Specification and in the Aberdeen to Inverness Transport Corridor Study. 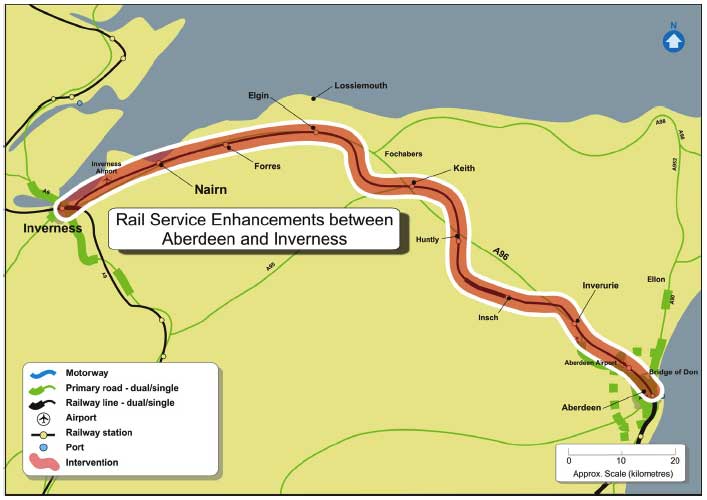 A.197 As a ‘Tier 3’ intervention in the Scottish Ministers’ High Level Output Specification, Network Rail have been asked to produce a credible and affordable delivery plan to progress development of this intervention, for potential implementation during Control Period 4 (2009-2014). There has been no specific detailed consultation on this individual intervention. However it is expected that any measure which promotes modal shift to more sustainable transport would achieve public support.

A.198 The costs for this intervention are driven by the need to provide double track on approach to Aberdeen. Total cost is estimated to be in the range £250m - £500m.

A.199 The deliverability of this intervention is considered technically and operationally feasible. The construction of new loops and double track sections may require upgrading of structures and a Transport & Works Act depending on the location of any works and whether they are built within the existing railway alignment. It is likely that this work will require new signalling systems designed to modern standards. These would have to interface with existing systems and there is a risk on the basis of system compatibility. Ground conditions may be a risk depending on the site of the proposed station and where the alignment improvements are made.

A.200 The work required to add new loops and additional tracks would require the closure of the line when connecting them to the existing rail network. This would cause disruption to passengers that use the line, although this work may be done during routine maintenance possessions. There is a risk that running extra services will have an impact on other parts of the network, such as at Inverness and Aberdeen stations.