A.201 This intervention supports the objective to improve access to Grangemouth port and the freight hub, by improving access for both road and rail freight. Improved road access from Grangemouth onto the motorway network would be provided through upgrades to Junction 6 on the M9 (providing south – facing slip roads) The A801 would be upgraded between Grangemouth and the M8 (including carriageway improvements and a new viaduct) to serve developing industrial and distribution facilities along the M8 corridor.

A.202 Improved rail access would be provided through capacity enhancements at and around Grangemouth Junction, to allow more trains to access the freight facilities at Grangemouth. These would build on the committed improvements to the Edinburgh – Glasgow route, and would include electrification between Coatbridge and Grangemouth as well as increased loading gauge to allow larger containers to be carried. In addition, track modifications are proposed to provide improved access from the west and a new curve to permit direct access from the east.

A.203 Improving the direct link from Grangemouth to the developing industrial and distribution facilities along the M8 via the upgraded A801 would make it more suitable for the role that it is currently performed and allow for increased economic growth on this corridor.

A.204 In addition it would offer significant journey time improvements and a reduction in the accident rate of around a third on the A801. Provision of this high quality route would also offer the opportunity for existing Heavy Goods Vehicles which use the M8 and M9 to reduce their current journey times by a minimum of 20 minutes.

A.205 This intervention would deliver a small positive impact on the environment as a result of the removal of some Heavy Goods Vehicles from parts of Grangemouth and rail improvements that include electrification, both of which are envisaged to contribute to reduced emissions. This intervention would however impact on the designated environmental sites along the route and this would need to be considered further in the development of any proposed alignment of a new road crossing of the Avon Gorge.

A.206 The rail element would allow more freight trains to run into Grangemouth freight terminal without conflicting with passenger services, which in turn would improve journey time reliability. Electrification would allow freight trains to be operated from the West Coast Main Line by faster electric locomotives. Increasing the loading gauge would allow larger containers to be carried to and from Grangemouth. All of these improvements would also help make rail freight more attractive for hauliers.

A.207 The economic analysis of this intervention suggests that overall the intervention offers value for money. 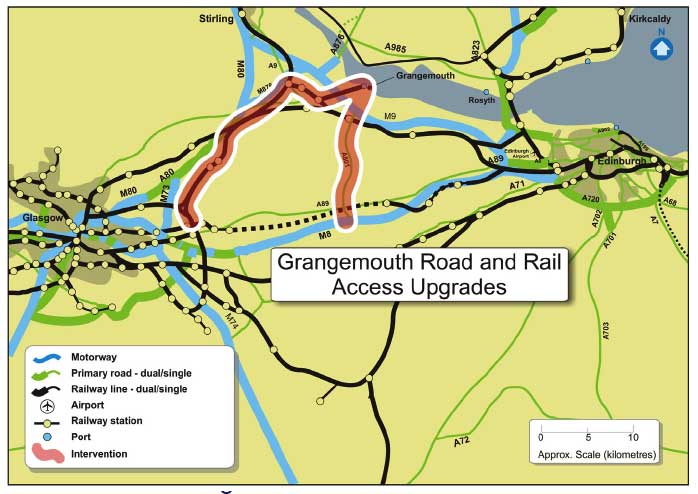 A.208 Rail capacity enhancements and junction improvements would be associated with the proposed enhancements to Intervention 15 (Edinburgh to Glasgow Rail Improvements Programme). Requirements for improved access to Grangemouth have been highlighted in the SEStran Regional Transport Strategy (RTS) and the Network Rail Route Utilisation Strategy for Scotland.

A.209 Grangemouth Freight hub is designated as a National Development in the second National Planning Framework (NPF2). The upgrade to Junction 6 of the M9 and the rail improvements to Grangemouth would be mainly welcomed by the public since they would reduce flows, especially Heavy Goods Vehicles, through urban areas, however the construction and subsequent operation of the junction may impact on surrounding residential properties. The A801 upgrade would generally be welcomed; however the environmental impacts of crossing the Avon Gorge must be fully considered before any intervention is progressed.

A.211 The deliverability of this intervention is considered technically and operationally feasible. The intervention would however impact on the designated environmental sites along the route and this would need to be considered further in the development of any proposed alignment of a new road crossing of the Avon Gorge. The intervention would require modification of Junction 6 with the construction of slip roads from the motorway on three approaches. This may be difficult to construct due to the proximity of properties and local roads.

A.212 It is likely that current road users on the M9, the A801 and other adjacent roads such as the A706 and the A905 would be affected during construction. However following construction, it is unlikely that any factors would negatively affect the operation of the intervention during its projected life. The A801 is currently a non-trunk road and comes under the responsibility of the local authority. It is not clear if this would remain the case after any upgrade. Upgrades on the rail network may affect existing services during engineering possessions.