A.213 This intervention would contribute significantly to a number of objectives for Edinburgh relating to improvements in public transport interchange, connections to the airport and enhanced rail capacity.

A.214 This intervention would consist of:

A.215 Further details of this intervention can be found in the Haymarket Interchange Feasibility Study – Final Report43 , with reference to Phase 1 intervention.

A.216 This intervention would provide a significant contribution towards two of the objectives for Edinburgh, ‘to maintain the 60-minute commutable labour market area at the current level, with a particular focus on linking areas of economic activity’ and ‘to enhance public transport interchange opportunities, where feasible to do so’, by providing a ‘step-change’ in interchange facilities in Edinburgh. There is a forecast 50 per cent increase in rail demand between 2005 and 2022, as well as the growth in bus and tram passengers. By providing the opportunity for transfer between heavy rail, light rail and bus, opportunities for travel to areas in west Edinburgh, including the airport, would be greatly enhanced.

A.217 This intervention would complement measures to maximise the use of the station and reduce pressure on Waverley Station and the link between the two, such as the additional bay platform.

A.218 Creation of an enhanced interchange at Haymarket would complement the land use changes in west Edinburgh and would also facilitate additional commercial development in the surrounding area. It would also build on the proposed Haymarket Station Capacity Project which involves initial capacity improvement works and the improved interchange with the tram and bus networks. 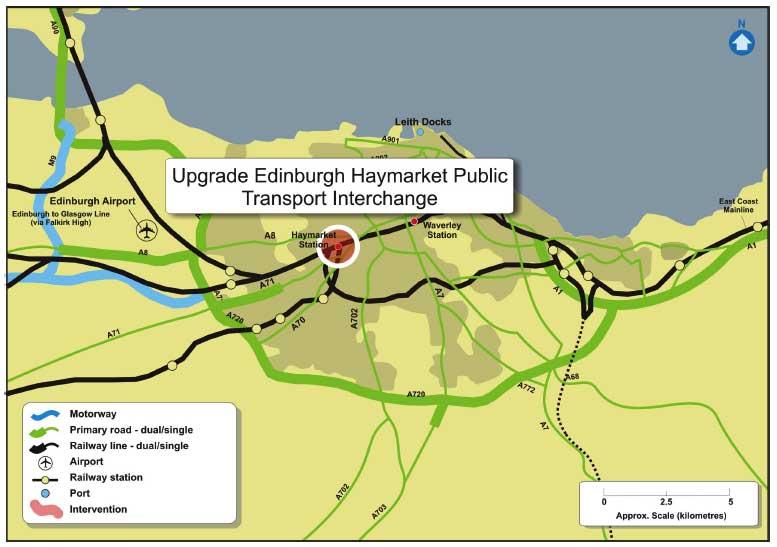 A.219 The deliverability of this intervention is considered technically and operationally feasible. The intervention is at an early stage of development. Consultations have been undertaken with key stakeholders, local residents and businesses. The results were incorporated into the preferred option for the existing intervention44. Any further developments for this intervention, which promotes modal shift, could be viewed favourably.

A.221 It is unlikely that any untried techniques would be required during implementation of this intervention, however during the design stage localised issues could arise which require increased technical capabilities to be addressed.

A.222 Given the proximity of the site to a busy rail line with continued operations being essential, and the relationship to the newly constructed tram route, issues related to constructability and phasing would be critical considerations to successful project delivery.