A.223 On a number of corridors throughout Scotland, objectives have been identified to reduce conflicts between strategic and local traffic. Reducing these conflicts can significantly contribute to road safety, journey time reliability, reducing emissions and reducing severance.

A.224 This intervention targets specific locations on the road network where improvements would address these issues and includes measures such as:

A.225 The grade separations on the A77 between Whitletts Roundabout and Bankfield Roundabout, would remove the conflict of local and strategic traffic, as well as reducing journey times by approximately 10 minutes. Upgrading the A77 to the east of Ayr would also provide additional capacity for traffic that is likely to be generated as Ayr expands to the south east. These interventions would also improve access to the ports at Loch Ryan with consequential benefits for freight and passenger traffic.

A.226 Providing improvements on the A737 such as a bypass of Dalry would help to reduce the conflict between local and strategic traffic that occurs along this route, thus improving road safety and journey time reliability on the A737.

A.227 The A720 improvements would help to maintain the 60-minute commutable labour market area around Edinburgh, and would provide benefits for journeys to or between two of Edinburgh's areas of economic activity, West Edinburgh and the Shawfair development. Journey time reductions of approximately 5 minutes are forecast with this improvement for all elements.

A.228 Enhancements to the A96 such as a bypass around Nairn would reduce the conflict between local and strategic traffic and improve journey times and journey time reliability along the route.

A.229 These interventions have been highlighted in the relevant Regional Transport Strategies. The A96 bypass interventions would build on Intervention 4 (Targeted Programme of Measures to Reduce Accident Severity in North and West Scotland) and add to the A96 enhancements proposed at the western end in Intervention 18 (Upgrade A96 to Dual Carriageway between Inverness and Nairn). 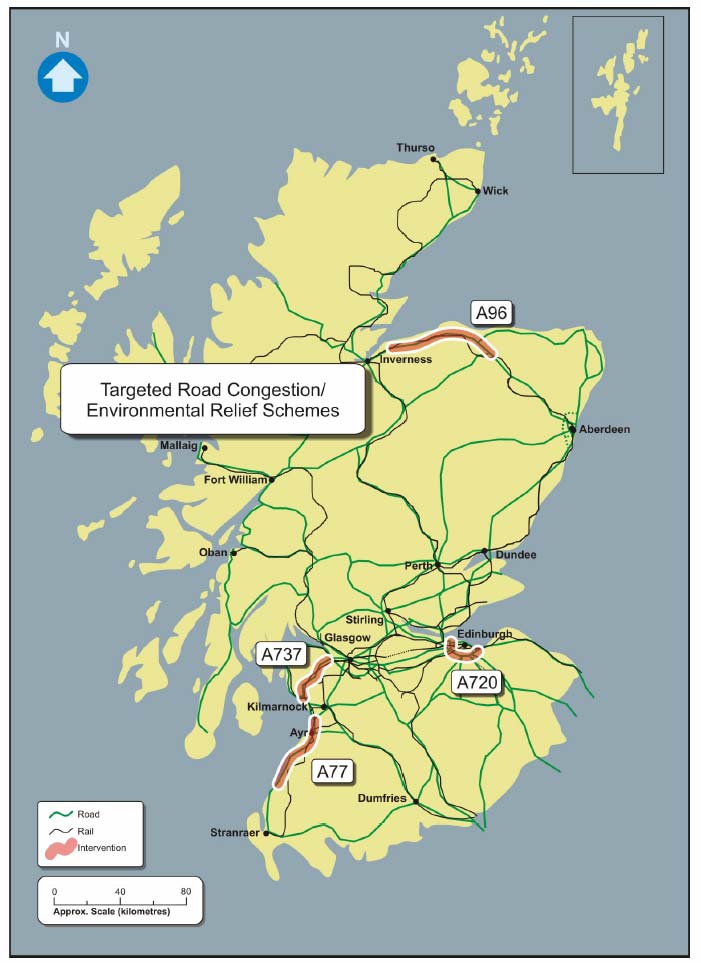 A.230 Many of the improvements have been known to the public for a number of years and there would appear to be support for them, however the environmental impact could prompt negative public opinion.

A.232 The deliverability of this intervention is considered technically and operationally feasible. This intervention would use no new untried techniques although there would be some major infrastructure works needed in order to cross major roads and railway lines as well as rivers and burns, which all of the proposed bypasses would need to do. There are also a number of SSSIs, ancient woodlands and ancient monuments which have to be taken into account when designing and constructing the bypasses.

A.233 The environmental impacts this intervention has on cultural heritage and landscape have been identified at the strategic level as part of the Strategic Environmental Assessment (SEA) and Appropriate Assessment, however reductions in congestion are expected to contribute towards a decrease in emissions. Appropriate mitigation and avoidance measures have been identified and will be further refined should this intervention be taken forward.

A.234 Construction work may affect the environment of surrounding areas and may cause delays to traffic, however there would be no issues following the completion of the works. The responsibility for operational issues on the proposed measures in this intervention would remain with Transport Scotland and its maintenance contractors. Responsibility for the existing routes through the towns could pass to the local authority.