23 – RAIL SERVICE ENHANCEMENTS BETWEEN ABERDEEN AND THE CENTRAL BELT

23 – RAIL SERVICE ENHANCEMENTS BETWEEN ABERDEEN AND THE CENTRAL BELT

A.235 This intervention supports the objectives to improve public transport competitiveness between Aberdeen and the Central Belt and provide enhanced opportunities to move freight by rail. It would involve:

A.236 Phase 1 would include line speed improvements, additional loops to allow passing of freight trains, and upgraded signalling along the entire length of the line to reduce headway times. The intervention would also require more powerful rolling stock. Phase 2 would involve the removal of the single track at Usan, including a new bridge over Montrose Basin.

A.237 The passenger enhancements could be optimised to also benefit freight operations. It is envisaged that this would include:

A.238 Included within this intervention is the capability to operate low floor wagons that are currently becoming available for use on the network. These would allow standard containers to be carried on existing infrastructure with minimal physical works, such as targeted gauge enhancements at appropriate structures.

A.239 This intervention would help to reduce journey times between Aberdeen and the Central Belt by around 20 minutes, the majority of which would be delivered under Phase 1. This intervention would assist in allowing travellers to achieve an effective working day when travelling between Scotland's four largest cities. These improvements would lead to an increase in demand for rail travel, and a modal shift from private car use. The freight improvements would make it considerably more attractive for freight hauliers to move containers and other goods by rail, by reducing journey times. 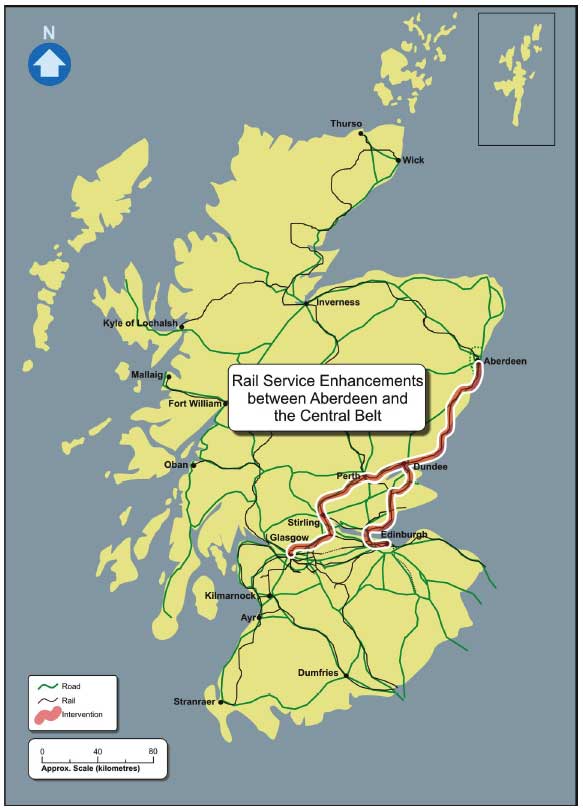 A.241 Infrastructure links to improve journey times between the Central Belt and Aberdeen have been identified as one of the outputs in the Scottish Ministers’ High Level Output Specification.

A.242 As a ‘Tier 3’ intervention in the Scottish Ministers’ High Level Output Specification, Network Rail have been asked to produce a credible and affordable delivery plan to progress development of this intervention, for potential implementation during Control Period 4 (2009-2014). In general terms, the intervention would improve service provision and modal shift and would therefore be met with public approval. The movement of freight from road to rail would be generally welcomed.

A.244 The deliverability of the intervention is considered technically and operationally feasible. The crossing over the Montrose Basin at Usan would potentially impact negatively on the local environment, and will need to be planned with care. However, this component if constructed would provide operational efficiencies and remove the only single track section of the East Coast Main Line. The physical works do not use any untried construction, although localised issues requiring increased technical capabilities to overcome might arise as the design process progresses. There are a large number of structures along the route for improvement, including under- and overbridges, viaducts and tunnels. All will need to be checked to determine the need for suitable upgrade to allow envisaged line speed and freight gauge enhancements. Additional loops will also be needed to allow freight trains to be passed.

A.245 During implementation of the proposed improvements the line might be closed for a period of time which would affect current users. Enhanced service frequencies would require additional rolling stock, train crew and timetable amendments. The sourcing of more powerful rolling stock would further enhance the benefits of this intervention.

A.246 The environmental impacts this intervention has on biodiversity and water quality have been identified at the strategic level as part of the Strategic Environmental Assessment (SEA) and Appropriate Assessment. Appropriate mitigation and avoidance measures have been identified and will be further refined should this intervention be taken forward.