A.269 This intervention would provide four trains-per-hour each between Glasgow and Ayr, Glasgow and Kilmarnock and Glasgow and Gourock with each route served by two semi-fast services and two stopping services.

A.270 The Paisley Canal line would be reconnected to the Ayrshire line and four trains-per-hour between Glasgow and Johnstone. This would also provide an alternative route for passenger and freight services to and from Ayrshire. The intervention would also provide two trains-per-hour between Glasgow and Wemyss Bay. As well as additional rolling stock, this is likely to require the following infrastructure enhancements:

A.271 This intervention would provide a ‘step-change’ in rail service provision to the west and south west. This would result in a significant contribution to the objectives to increase rail capacity to Ayrshire and capacity and journey time to Inverclyde.

A.272 The feasibility of this intervention is dependent on being able to provide a solution to more platform capacity in central Glasgow to accommodate the services, as proposed in Intervention 24 (West of Scotland Strategic Rail Enhancements).

A.273 The improved services provide relief for the identified overcrowding issue on the south west electric services and give opportunity for modal shift from road to rail, particularly from Kilmarnock where the increased service frequency is high.

A.274 This intervention is expected to have a moderate positive environmental impact on air quality as a modal shift from road to rail is envisaged to reduce congestion leading to a contribution to improved air quality. 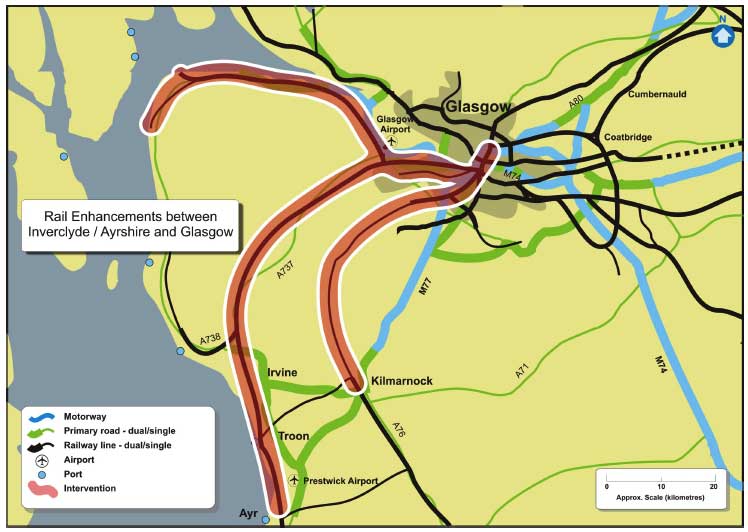 A.276 This intervention has not been made public. However, it is expected that the intervention would be supported by the public with no significant objections raised.

A.277 The total cost (assuming that platform capacity is available at Glasgow Central) is estimated to be in the range of £250m-£500m.

A.278 The deliverability of the intervention is considered technically and operationally feasible. The intervention is highly dependent on being able to provide a solution to more platform capacity in central Glasgow to accommodate the services, e.g. through the conversion of the Cathcart Circle to Metro operation, through alternative proposals to divert services or to constructing additional capacity.

A.279 Doubling the track along the Kilmarnock to Barrhead line would cause some closures during construction. Along the route there is approximately 3km between Kilmaurs and Kilmarnock affected by mining. With no viable diversion route this is likely to increase pressure on the road network into Glasgow during these periods.

A.280 Some of the original trackbed between Paisley Canal Station and Elderslie has been sold and developed. This will make the process of returning the route to a twin-track railway more complex than it might otherwise have been. The extension of the Paisley Canal Line to Elderslie would provide an alternative route for Glasgow to Ayr passenger trains and freight traffic, including coal trains from Hunterston to Longannet. This could free up some capacity in the bottleneck area between Paisley and Shields. Providing additional capacity between Glasgow and Shields would be extremely challenging. Following construction, it is unlikely that any factors would adversely affect the operation of the increased service frequencies on railway services between Glasgow and Inverclyde during its projected life. However the doubling of the service frequency to Wemyss Bay over the single track branch line from Port Glasgow and the tight presentation times required at Paisley Gilmour Street would reduce journey time reliability and the increase the impact from delays on other services.