A.292 This intervention supports the objective to maintain the 60-minute commutable labour market within Edinburgh at the current level and improve access to the port of Rosyth national development. It would also support the objective of promoting public transport journey time reductions between Aberdeen Inverness, Perth and Edinburgh by reducing journey times between Inverkeithing and Ladybank.

A.293 This intervention would consist of a direct double track rail link between Halbeath and Inverkeithing, including new junctions at Inverkeithing and Halbeath.

Contribution towards the Scottish Government's Purpose

A.294 This intervention would reduce journey times between Edinburgh and Perth; and Inverness, Aberdeen and the Central Belt, although the reduction is unlikely to be significant. The greater journey time saving would be for freight, by providing a more effective link to the Rosyth port from the south, helping to support future development there.

A.295 This would provide the ability to run more direct services to Edinburgh in conjunction with a strategic Park and Ride facility at Halbeath. It would also enable the segregation of local and intercity services and provide more efficient freight access to the port of Rosyth.

A.296 The draft of the second National Planning Framework (NPF2) recognises that an effective (road and) rail infrastructure to support national and international connections by sea is essential to ensure that the critical role of ports in supporting and contributing to Scotland’s business and economic health is fully realised.

A.297 This intervention interacts with other strategies aimed at improving rail inter-city journey times (especially Edinburgh – Inverness on the Highland Main Line). It will require increased capacity between Edinburgh and Inverkeithing / Dunfermline (e.g. as proposed in the Network Rail Route Utilisation Strategy for Scotland) and would need to interface with the proposed restructuring of Edinburgh – Fife services in terms of the usage of this increased capacity. 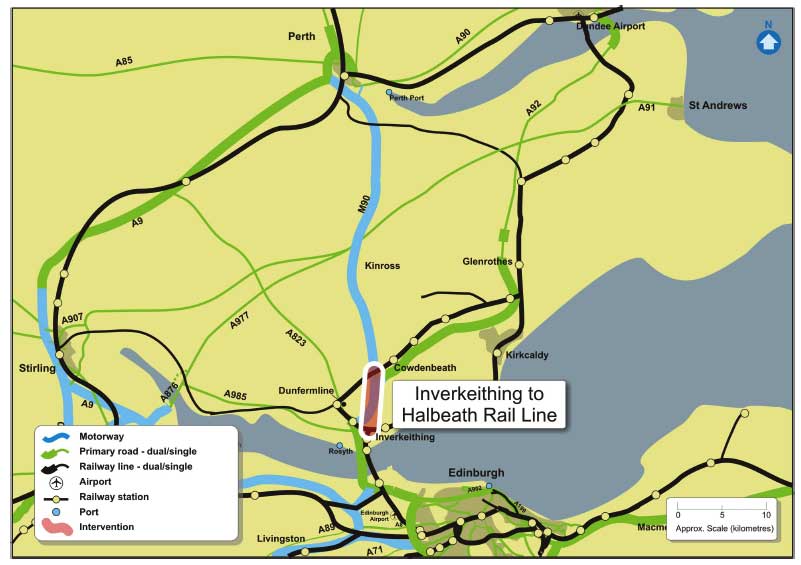 A.298 This intervention has been formulated as part of the Strategic Transport Projects Review (STPR). No other work has been carried out on the development of this intervention. However it is expected that any measure which promotes modal shift to more sustainable transport would achieve public support

A.299 This intervention would require fairly significant new construction and land take. Costs for the intervention are estimated to be in the range £100m - £250m.

A.300 The deliverability of the intervention is considered technically and operationally feasible. It is expected that no untried techniques should be required when implementing any aspects of this intervention, however as the design stages progress, localised issues may arise which require increased technical capabilities to overcome.