Providing the infrastructure to recharge plug-in vehicles is an important factor in encouraging their adoption. A 2016 survey by the Department for Transport found that recharging was the factor most deterring driving licence holders from purchasing an electric car or van. This incorporates a range of concerns, such as lack of charging points in their area and a lack of knowledge of where charging points are.

There has been a significant increase in the number and use of charge points in the past few years resulting in Scotland having one of the most comprehensive networks in Europe. Scotland now has the highest ratio of public charge points per household in the UK after North East England and Northern Ireland.[10] As of August 2016, the ChargePlace Scotland network consisted of over 600 publicly available charge points, equating to over 1,200 charging bays. In addition, over 40 charge points are available in Scotland, through private charge point network operators Ecotricity, Tesla and Chargemaster[11].

The majority of energy (56%) consumed from ChargePlace Scotland charge points is in the four largest cities, with Dundee consuming the most, followed by Glasgow then Edinburgh and Aberdeen.[12] High energy consumption is also seen in the local authority areas surrounding Dundee and some of the areas around Glasgow (Figure 10).

There has been targeted investment to provide charge points at hubs for multi-modal journeys. Charge points have been installed at the following ferry terminals: Tarbert, Colonsay, Kilchoan, Castlebay, Oban, Brodick, Kennacraig, Port Ellen, Scrabster, Gill's Bay and Ullapool. The following park and ride sites also have charge points available: Kinross, Kingswells, Dumbarton, Ingliston and Castleview. In addition, Abellio ScotRail are committed to providing charging facilities at 50 stations across Scotland by the end of 2017, with additional incentives for plug-in vehicle drivers also being considered.

Scottish local authorities have also benefited from support from OLEV, for example Dundee has been selected as one of eight cities to receive a share of the £40 million, available through the Go Ultra Low City Scheme. Funding awarded to Dundee will support the creation of innovative charging hubs in the city.

To support domestic charging, Transport Scotland, via EST, has provided grants to plug-in vehicle owners to enable them to have a charge point installed at their home. As of October 2016, over 870 domestic units have been installed. EST funding of £500, alongside £500 from OLEV, continues to be available in 2016-17. 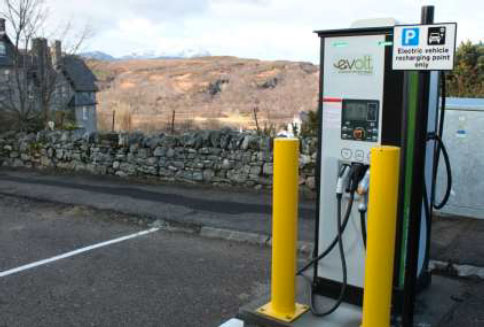