To promote Scotland as a leading plug-in vehicle nation, the E-cosse partnership has been leading an international dissemination programme, presenting Scotland's story at a range of international events. Locations include: Barcelona, Bratislava, Japan, Ireland and Belgium.

There have also been specific initiatives to encourage the development of new goods and services for plug-in vehicles in Scotland.

The Scottish Enterprise Mobility Integration Challenge was setup in 2013 as part of a vision to make Scotland the global location of choice for the demonstration of Smart Mobility products[15]. It closed to applicants in January 2014, after generating 57 collaborative demonstrator project ideas involving over 180 firms. Bidders committed £61 million of investment, seeking £47 million of public sector support and private sector investment.

In March 2016, seven technology companies in Scotland received a share of £2.5m from OLEV and Innovate UK for emission-cutting technology projects[16].

Transport Scotland has secured European Regional Development Funding and is scheduled to launch a Low Carbon Travel and Transport Challenge Fund in November/December 2016. This capital funding will support the development of 'hubs', including refuelling facilities for a range of alternatively fuelled vehicles. The programme also aims to increase the number of ULEV registration in Scotland by 200. £8 million is available during the first phase, which runs until the end of 2018.

In 2016, Scottish Enterprise provided an R&D grant of £285,000 to Livingston-based Route Monkey[17] to develop new technology to enable plug-in vehicle drivers to follow an optimum route to get the most miles per charge. The funding contributes towards the total project cost of £750,000 and will create four new permanent jobs.

There have been a range of incentives to encourage business to adopt plug-in vehicles including:

To date, the Low Carbon Transport Loan has supported the purchase of over 130 plug-in vehicles by businesses. For example, East Coast Organics, a farm based in the village of Pentcaitland is using plug-in vans purchased through the loan fund for its delivery operations. 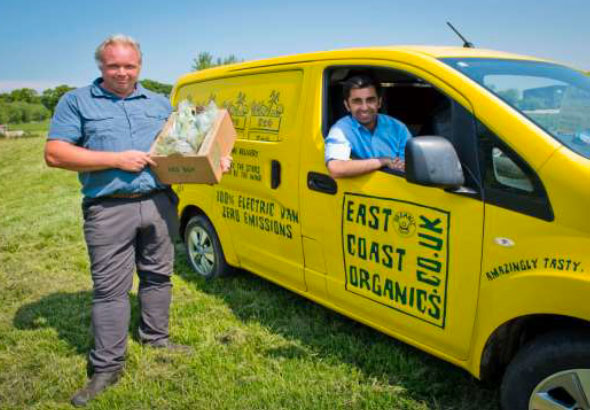 There has also been initiatives to make the business case for organisations to adopt plug-in vehicles. Organisations involved in Switched On Fleets, benefitted from analysis that identified opportunities to save fuel and money by incorporating plug-in vehicles. The analysis explored the current usage of the existing fleet, identified which vehicles could be replaced by plug-ins and which models would be most appropriate and cost effective. It also provided organisations with reliable evidence on which to base investment decisions for plug-in vehicles.

Companies like '203020 Electric', which runs the largest all-electric taxi fleet in Scotland, have also benefitted. Supported by Dundee City Council, EST and Transport Scotland and launched in April 2015, the firm reported having driven over a million all-electric miles by February 2016, a target reached well ahead of schedule. Owner David Young said: "We never expected to hit a million miles so soon but it's terrific that we have. It just goes to show how well the people of Dundee have taken to the idea of electric taxis. And each driver is saving between £120 and £130 a week on fuel so they're delighted."[18]