AWPR to open between Parkhill (Goval) and Blackdog Junctions 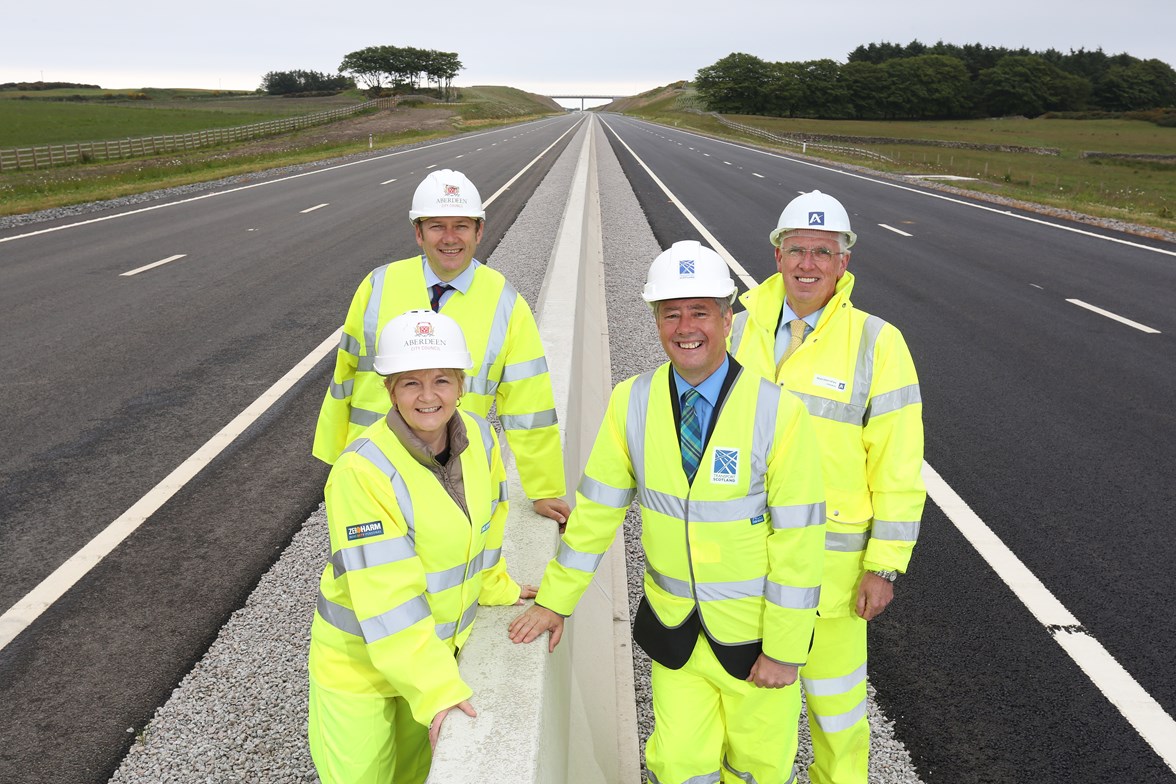 A 7km section of the new Aberdeen Western Peripheral Route between Parkhill (Goval) and Blackdog Junctions is expected to open this Wednesday, 27 June, delivering a range of benefits including improved safety, local access and journey time reliability.
Exciting aerial footage is available to see the new road from the air, along with further background information.
Blackdog Junction opened to traffic in May 2018 and is already improving access to Belhelvie, Potterton, Blackdog and Blackdog Industrial Estate. The link with Parkhill Junction will further improve access to local areas and the trunk road network to the north of the city, for instance between Dyce and Bridge of Don.
The speed limit for this section of road will be 70mph with a reduced speed limit on the approach to the slip roads at the junctions.
Cabinet Secretary for Economy, Jobs and Fair Work, Keith Brown said:
“I am pleased to confirm that a new 7km section of the A90 between Parkhill and Blackdog will open this week. I am sure this news will be appreciated by local communities, road users and businesses in the north east who continue to be extremely patient while these works are being undertaken.
“The Parkhill to Blackdog section is the first section of the AWPR mainline trunk road to open and is the most substantial section of the project to open to date. We said we would open new sections of road when possible, and we have stood by that commitment.
“These new junctions and section of road will provide thousands of drivers every day with a range of benefits, including reduced journey times, improved journey time reliability, better local access and reduced congestion, while safety will also be enhanced. Indeed, once the new road opens in its entirety, drivers will also have improved links to the north and south of Aberdeen, as well as to local areas.”
The opening of the Goval to Blackdog section is just one of a number of visible signs that the construction phase is nearing completion. Over the past few weeks, the new Balmedie Junction has also opened to traffic and works have now progressed to allow the average speed cameras at Balmedie, Charleston and Stonehaven to be removed. These recent milestones augment the new Craibstone Roundabout and Dyce Drive Junction, which fully opened to traffic in September 2016, together with a number of side roads and accesses across the project which have been brought into use.
Mr Brown continued:
“Although opening each of these individual sections contributes in its own way, the full benefits of the project will be realised when the AWPR/B-T fully opens in Autumn 2018. Our investment in this project is expected to bring in an additional £6 billion to the north east economy and to create around 14,000 jobs over the next 30 years.
“More widely, we are committed to making improvements at the Haudagain Roundabout once work on the AWPR project is complete. With the new Inveramsay Bridge on the A96, the commitment to dual the A96 between Aberdeen and Inverness, and the £330 million improvement to rail links between the two cities, we are investimg in the North East in an unprecedented way.”

The new Parkhill to Blackdog section of the route includes the construction of a 7km section of two-lane dual carriageway between the junctions; slip roads to and from the AWPR at each junction; one at-grade signalised roundabout; two new grade separated roundabouts; various connecting roads, the realigned A947 Aberdeen to Banff Road which passes above the AWPR via a new bridge; and the realignment of a number of side roads and accesses, including the B977 Belhelvie Road and the B999 Aberdeen to Tarves Road.
Aberdeen City Council Co-Leader Jenny Laing added:
“The opening of the 7km Parkhill to Blackdog section is a further significant step in the AWPR/B-T project. The completion of the AWPR/B-T later this year will bring enormous benefits to the city and region and as a whole and Aberdeen City Council is proud to invest £75million into what is one of the major infrastructure projects that will boost the North East’s economic potential still further.”
Leader of Aberdeenshire Council Cllr Jim Gifford commented:
"This is exactly the sort of news that the people of Aberdeenshire have been waiting for. This road building project is on such a large scale that opening sections as and when they are ready makes absolute sense. By working with our partners we have been able to deliver this significant investment, which will have transformational benefits. We look forward to the full opening later this year.”
Published 25 Jun 2018 Tags