Celebration As A96 Bottleneck Uncorked - New Inveramsay Bridge To Open 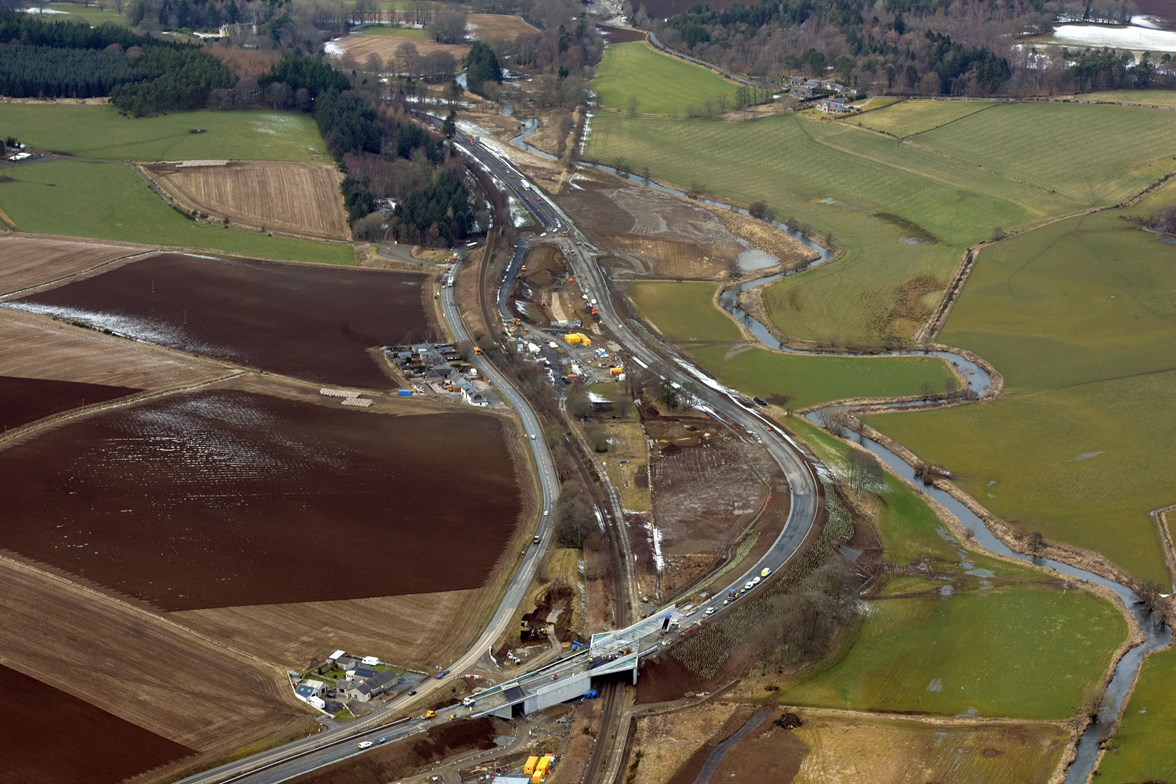 An upgrade to a notorious bottleneck on the A96 at Inveramsay Bridge where traffic lights have been in place for decades, is set to open under traffic management tomorrow (18 March).

The £10.2 million infrastructure project which will carry the A96 over the Aberdeen-Inverness railway line, will end queuing at lights, improve journey time reliability and reduce the risk of bridge strikes and associated disruption.

Transport Minister Derek MacKay, who visited the site today to see the final touches being put in place, said:

“For years drivers and local communities who use this section of the A96 have endured delays to their journeys with this bottleneck earning notoriety as one of the worst in the country. The old rail bridge was simply not fit for purpose and is why the Scottish Government committed to tackling a unique set of engineering challenges to help bring the A96 at this location up to 21st century standards.

“We wanted to ensure drivers and local communities who have waited patiently for the upgrade feel the benefits at the earliest opportunity, so I’m delighted that in just a few hours time, they will get the green light to drive on the new road.

“Inversamsay, which is on time and on budget, is emblematic of our wider commitment to delivering transport improvements right across the region.

"The 58km £745 million Aberdeen bypass is on schedule to open to traffic in winter 2017, preparatory work is ongoing which will allow us to start construction of an upgraded Haudagain roundabout on completion of the new bypass, and early design and assessment work to dual the full length of the A96 from Aberdeen to Inverness is making good headway. We are also investing £170 million to strengthen rail infrastructure between both cities to help make journeys shorter, more frequent and more comfortable, and have committed £200m through the City Deal to upgrade the rail line between Aberdeen and the central belt. We have also invested in more trains which will mean from 2018 more local rail services across the north east rail network, and faster, more frequent links from Aberdeen to the central belt."

“We are determined to transform transport infrastructure right across the region and this much needed improvement here at Inveramsay Bridge underlines that the Scottish Government is getting on and doing just that.”


Balfour Beatty Managing Director, George Hood said: “Balfour Beatty are delighted to have been working in close collaboration with Transport Scotland’s team to bring this project to a successful conclusion.

We would like to thank the road users for their patience and regard for safety during construction works. We also thank our loyal and dedicated supply chain for helping us to get the new road open by the target date.”

2. An audio clip from Mr Mackay is expected to be made available later this morning for download at:

3. The exact timings around at what point on Friday 18th the road will open to traffic will be determined in consultation with Police Scotland. The new road is planned to open under traffic management with a 30mph speed restriction, to allow tie-in, bridge parapet and other offline works to be completed in the coming weeks by the contractor, Balfour Beatty. Finishing works are subject to weather conditions.

4. Traffic management is required to ensure the safety of road users and construction workers.

5. The £10.2 million Inveramsay Bridge improvement delivers approximately 1.5km of new road, including a new bridge that will carry the A96 trunk road over the Aberdeen to Inverness railway. Local businesses and communities will benefit from the improvements with congestion removed at the bridge and traffic able to flow freely along the route. Delivery of this scheme will also benefit the economy with improved journey time reliability.

6. For further information on the A96 Inveramsay project, please visit http://www.transport.gov.scot/project/a96-inveramsay-bridge