A9 Dualling: Luncarty to Pass of Birnam - Construction update - Summer 2021

At the beginning of June, the project reached a significant milestone as the new Stanley/Tullybelton Junction was opened to traffic for the first time, with the on-slip and off-slip to the northbound carriageway under traffic management.

The new junction, which includes the largest structure of the project, has been under construction for more than two years and has used: 268 tonnes of reinforcement steel – the equivalent weight of 34 double decker buses; 1,550 m³ of structural concrete; 15 precast concrete beams and approximately 500,000 m³ of earthworks – enough earth to fill approximately 226 Olympic-sized swimming pools. The earthworks for this junction alone accounted for two thirds of the earthworks for the entire project.

The new junction aims to improve safety for traffic joining and leaving the A9 carriageways with the creation of new northbound and southbound slip roads. By removing right turn manoeuvres from the A9 carriageways, visibility for road users has been enhanced, and access to the communities of Stanley and Tullybelton, as well as to neighbouring properties and businesses, have also been improved.

In addition, the final section of the new northbound carriageway road surface was completed at Bankfoot South Junction in early July. Following completion of the surfacing and central reservation works, the traffic management team was able to switch A9 traffic to run in single lane formation using both the northbound and southbound carriageways. 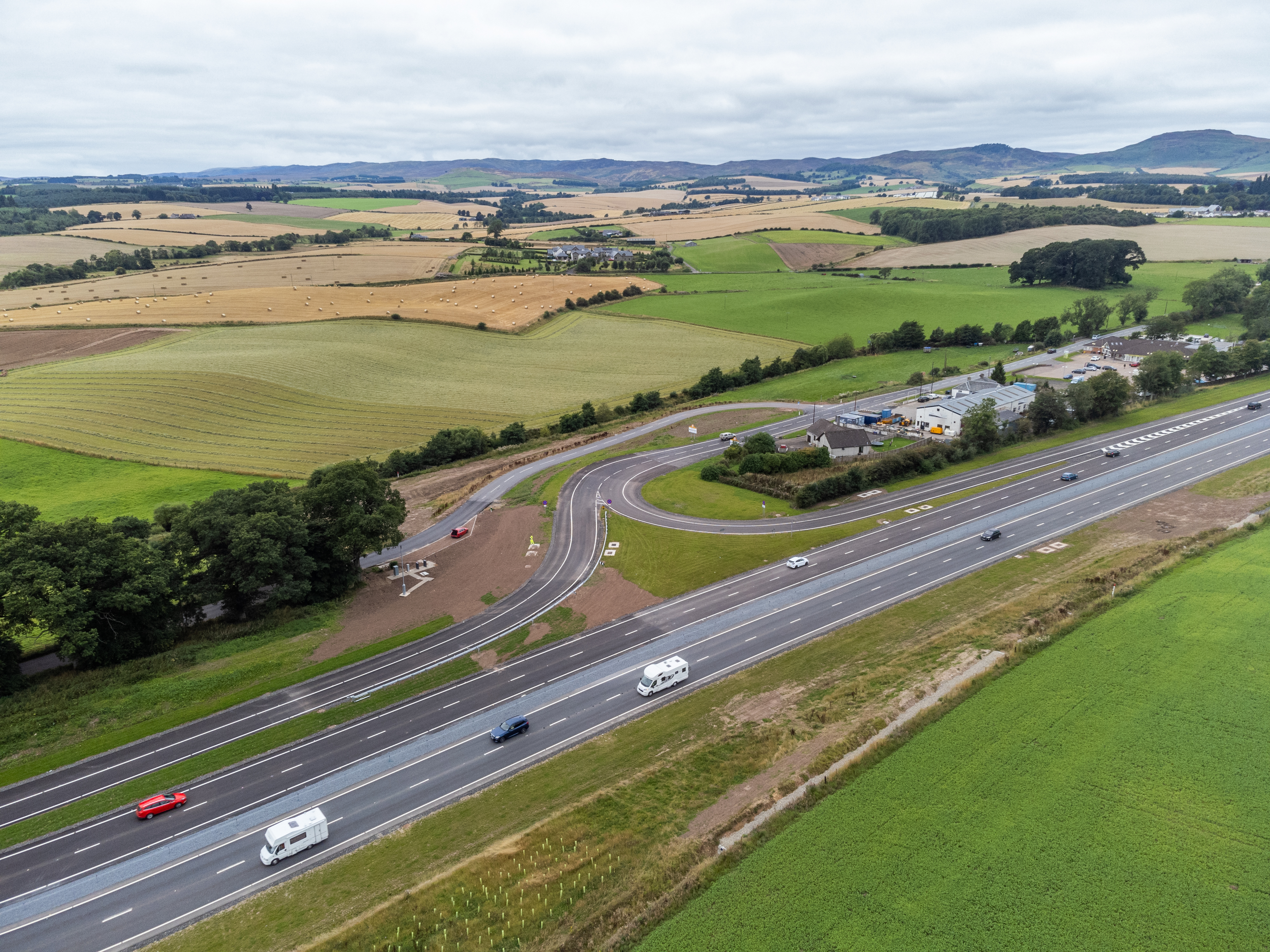 Tie-ins to the local road network were completed at the B9099, the C408 Stewart Towers Road, the B867 and the U116, and the existing Pitlandie Farm road was stopped-up in early July.

The surfacing of the bridge decks at Coltrannie and Gelly overbridges was completed in July and August. Once surfaced, the contractor was able to focus on the planting and landscaping of Gelly overbridge, known as the ‘green bridge,’ which, when complete, will provide an enhanced environment for wildlife to cross the A9.

The erection of permanent stock fencing has continued throughout the summer months at various locations on the site and the installation of Intelligent Transport Systems (ITS) fibre cables got underway along the northbound and southbound carriageway verges. These cables will allow information to be communicated within the trunk road network, such as information for Variable Message Signs (VMS) and other intelligent technology for monitoring of traffic flows and volumes. The VMS signs and CCTV masts were also installed throughout the summer months.

However, the main event of summer was undoubtedly the removal of all traffic management on the A9. On Saturday 28 August, lane and speed restrictions were lifted allowing road users access to the 9.5 km of new dual carriageway between Luncarty, north of Perth, and the Pass of Birnam for the first time. 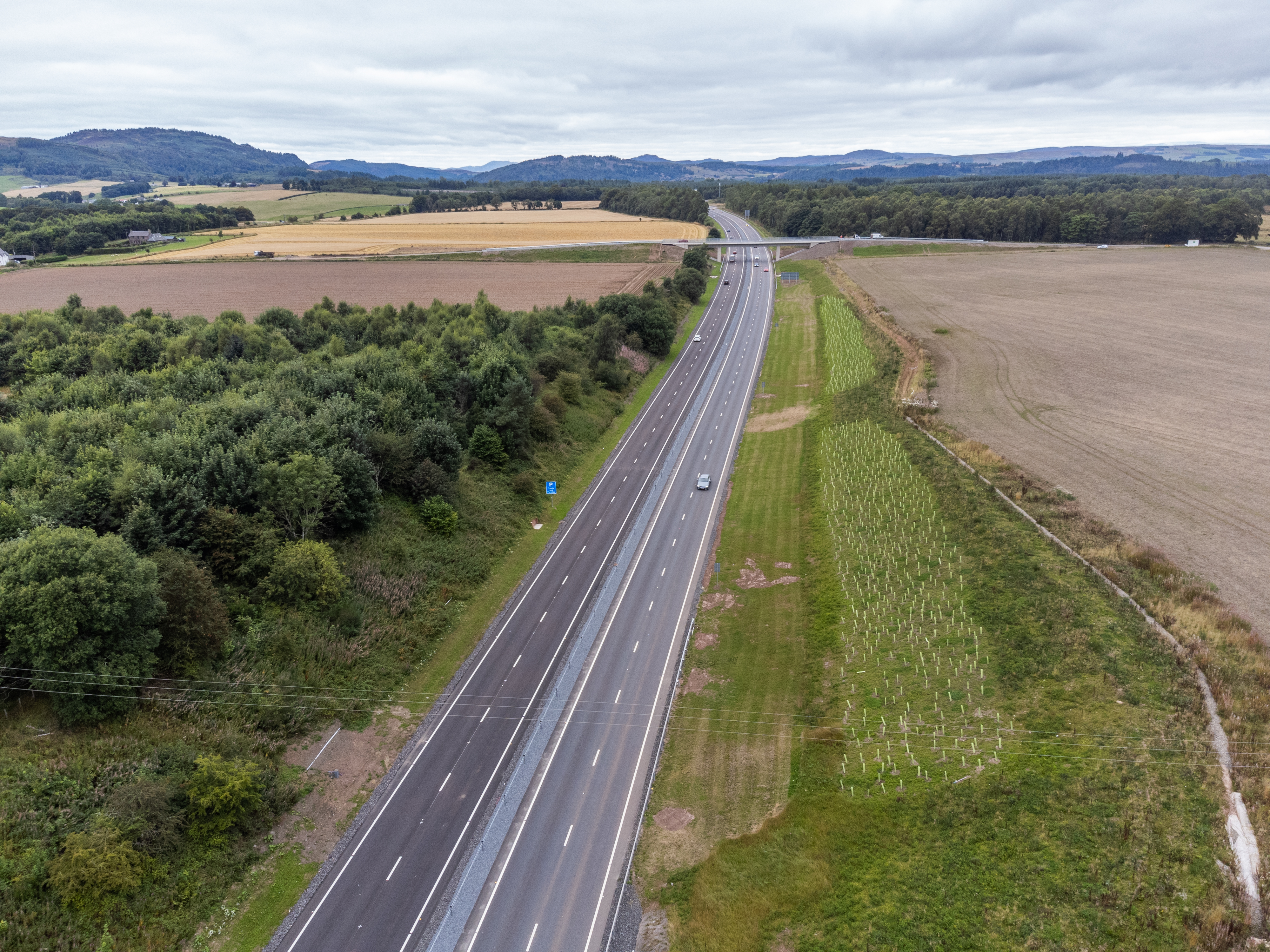 The opening of this section to four lanes of traffic, the most southerly section of the dualling programme, now provides 15 km of continuous dual carriageway from Inveralmond Roundabout to Birnam.

This important project milestone also included the opening of 4 km of new and upgraded non-motorised user route which now connects the surrounding communities to Scotland’s core path network. The routes will promote active travel and encourage people to walk, wheel and cycle for everyday journeys. View the new non-motorised user (NMU) route between these communities.

Following the opening of the new dual carriageways, the contractor is continuing to undertake finishing and landscaping works throughout the project, which may on occasion require some traffic management to allow works to be undertaken safely.